Thirty-six hours after she slipped and slammed her head in a darkened training room at the USTA Billie Jean King National Tennis Center, Canadian Eugenie Bouchard was forced to pull out of the U.S. Open on Sunday afternoon.

Bouchard wouldn't comment on the end of her tournament, which was blamed on a concussion. She sent out a member of her camp to explain what had happened, but not for attribution.

The accident was caused by a strange series of events that seemed to at least partially implicate staff working at the U.S. Open.

Asked if Bouchard is angry at organizers, one of her representatives said, "Um … [long pause] … I'm not going to comment on that. I don't want to speak for Genie. This is just what happened."

According to Bouchard, after finishing her mixed-doubles match late Friday night, she returned to the players' locker room located underneath the main stadium.

Around 10:45 p.m., she told a trainer that she was going to do her press availability, but would return to take an ice bath.

At or shortly after 11 p.m., she returned to the locker room. No women's matches were ongoing, and all the staff had left. In order to get to the ice baths, players must walk through a training room.

The lights had been turned off and the floor was slick. Bouchard was feeling her way around, "disoriented." She slipped and fell backward, landing hard on her elbow and head.

Not yet sure how badly she'd hurt herself, Bouchard left and went to the emergency room of New York's Mount Sinai hospital.

The next morning, feeling increasingly unwell, she returned to the U.S. Open to be treated by a tournament doctor. She was advised to drop out of that day's events in the doubles and mixed doubles.

Though suffering from multiple symptoms of a concussion – headache, sore neck, sensitivity to noise and light – Bouchard still wanted to try to compete in Sunday's singles match. It was scheduled to begin around 6 p.m.

At 3:30 p.m., Bouchard arrived at the players' entrance. Despite the heat, she had a hoodie pulled up over her head, and was wearing sunglasses. She moved unsteadily to the entrance, staring at the ground.

Going against the urging of her advisers, Bouchard tried to convince doctors that she was capable of playing. She spoke about attempting to run on a treadmill, to test her legs. She was re-examined and once again advised not to play by medical staff.

Generally speaking, tennis pros get the last word on whether they are capable of taking the court. They can be overruled by the tournament director for their own safety, which happens rarely.

Bouchard was convinced to give up around 4:30 p.m. She signed the letter of withdrawal and left the grounds.

The U.S. Open seemed taken unawares by developments. Nearly two days after the incident, and hours after Bouchard had withdrawn from the tournament, their head spokesperson wasn't familiar with any internal investigation into the matter.

Asked if organizers bear some responsibility for the mishap, that same spokesperson, Chris Widmaier, said, "I can't answer that until I have more information. I think it's a fair question, but I can't answer that."

This has the potential to become an interesting question of liability. Advancing out of Sunday's fourth round match against Roberta Vinci would have earned Bouchard an extra $197,000 (U.S.). There are still tournaments remaining, as well as sponsorship commitments. It's not clear how long it will take her to recover, or how much that has the potential to cost her.

There's no suggestion that Bouchard might contemplate legal action. When asked about it, Widmaier shrugged: "I certainly can't comment on that."

The unexpected nature of her end here seems oddly in keeping with Bouchard's year.

She came into 2015 burdened with the expectations placed on a breakout star – not just the next big player, but the face that would carry women's tennis forward.

She made major changes in her support team – splitting with her long-time coach and the agent who'd discovered her.

She was serviceable at the year's first big tournament, the Australian Open, reaching the quarter-finals. Two months later, she had a decent run into the Round of 16 at Indian Wells. Then everything went pear shaped.

For most of six months, Bouchard couldn't win for losing. It was a startling, humiliating descent. She'd finally seemed to start coming out of it here.

She arrived in New York without a coach, having fired the replacement. In what seemed like a bit of a desperate move, she brought in men's legend Jimmy Connors to advise her on an ad-hoc basis.

She seemed understandably brittle ahead of her first match, metronomically repeating her 'one day at a time' mantra. She won that encounter, and seemed surprised she'd managed it.

After the first match, she was asked how much any one victory now meant to her.

"So much!" Bouchard said.

She won her second match as well. And then her third – a steamy, three-set slog against former major finalist Dominika Cibulkova.

You didn't want to say Bouchard was back, but she looked a lot more like the player we wanted to remember. Usually upbeat, she now seemed buoyant.

"When I was coming into this tournament, one win was a huge thing for me," Bouchard said, late on that Friday night. "Every match, in a way, is really important to me."

That was her second-to-last answer. Bouchard got up, walked a few metres down the hallway and it was over.

The immediate question is, 'For how long?' Depending on how that turns out, it might be followed by, 'Who's to blame?'

Bouchard grinds out a win, back woes derail Raonic at U.S. Open
September 4, 2015 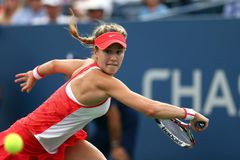 Kelly: Looking for meaning in decline, Raonic and Bouchard succumb to inertia
August 31, 2015