It's been six weeks since Eugenie Bouchard's captivating run to the Australian Open semi-finals, and the rising Canadian tennis star has rarely had a dull moment since.

Since losing to eventual tournament champion Li Na in the first Grand Slam semi-final appearance by a Canadian female singles player since 1984, Bouchard has been busy at work, play and business.

She helped Canada defeat Serbia in Fed Cup play, and competed in WTA Tour events in Qatar, Dubai and Mexico. She's been enlisted for WTA promotional events and photo shoots galore, from the beaches of Acapulco to an NHL game in Los Angeles. Now, the 20-year-old has arrived in Indian Wells, Calif., where the next marquee tennis event of the season kicks off this week.

It's the next opportunity for the Montreal native to be in the spotlight.

Bouchard began 2014 seeded 32nd in the WTA rankings and has jumped to No. 19, courtesy of her Melbourne performance. She is one of three Canadians already entered in the main draw in Indian Wells, along with ATP No. 11 Milos Raonic of Thornhill, Ont., and 27th-ranked Vasek Pospisil of Vernon, B.C.

She is expected to be seeded at the Masters 1000 event, with a bye through to the second round, which begins Friday.

But Bouchard's results since leaving Montreal point to the realities of life on the WTA Tour. The schedule is demanding, the travel arduous, and performing consistently is highly challenging.

The day following Canada's Fed Cup victory in front of an exuberant crowd in her hometown, Bouchard hopped on a 12-hour flight to Qatar, where she played the day after her arrival. Contending with jet lag, an eight-hour time difference, cool temperatures in the desert, and no coach along for the trip, Bouchard struggled while being bounced in the first round by No. 42 Bethanie Mattek-Sands of the U.S., 7-5, 6-1.

From there, Bouchard suffered a qualifying-round straight-sets loss in Dubai to 50th-ranked Annika Beck. Then, it was on to Acapulco, where No. 89 Caroline Garcia beat her in the quarter-finals.

"It was tough for me with some tough travel and tight turnarounds, but those are not excuses," Bouchard said by phone from Indian Wells, on a day when she would also do a photo shoot and film a video with 2014 Australian Open champion Stanislas Wawrinka at a game between the L.A. Kings and Montreal Canadiens.

"I faced some good players who played well, had some tough matches and tough experiences that showed me I have a lot of work to do and still so much to prove."

At the Mexican Open, Bouchard was asked to take part in some promotional activities alongside ATP No. 16 Grigor Dimitrov. The two rising stars went yachting, took a helicopter ride over Acapulco and rallied on a tennis platform floating on the sea, after which the two jumped into the water to cool off. She called it "one of the best experiences of my life."

Although it was a tournament promotion, the tabloids and social networks buzzed about the time spent between the two, since Dimitrov is dating women's tennis star Maria Sharapova. It signals the level of interest in the blossoming Canadian celebrity, who admits she's being noticed in public a lot more, and the demands on her time have multiplied.

"I take it in stride and it's part of the job – the key is not to let it get to your head and try to enjoy it and do as much as you can," Bouchard said. "Yeah, at the tournaments, I'm being asked to do more things, and so far, those experiences have turned out amazing.

"Of course, I have to keep telling myself that the priority is tennis, and I can do these fun activities when I have put in the hours on the court."

Fresh off her whirlwind run in Melbourne, the WTA tapped Bouchard to fly to Singapore with tennis legend Chris Evert to promote the tour's 2014 end-of-season championship tournament. In order to actually play in that event, Bouchard will have to be one of the top-eight point-getters – an ambitious goal for a player in just her second full season on Tour. (She is currently No. 8 on the Road to Singapore leaderboard.)

"I haven't specifically set that as a goal, but, obviously, I would love to make it, although it completely depends on the points, which isn't totally within my control," Bouchard said. "If I end up there, I would love that amazing week so much, but it's still a long way off, and to get there, it has to be about my performance on the court." 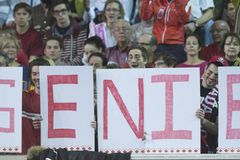 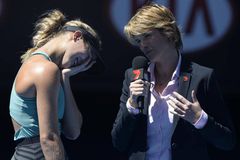 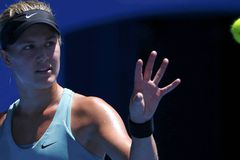 Why Eugenie Bouchard has so many fans at Kia Canada
January 24, 2014 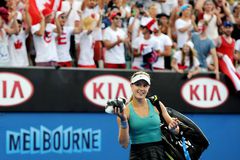