Olympic champion ice dancer Scott Moir made it very clear at the Grand Prix Final that he felt it was a bitter pill to swallow to finish second at the figure skating event in Quebec City last month.

However, perhaps it has become at least somewhat bittersweet. A calculation error in the International Skating Union scoring system in the free dance has given Moir and his partner Tessa Virtue an extra half a point.

The extra half point means that instead of finishing second, the Canadian champions won the free dance event over their archrivals (and friends) Meryl Davis and Charlie White of the United States.

The ISU website still lists the incorrect points on the Grand Prix Final, but now Virtue and Moir have a free dance winning score of 112.83, while Davis and White's score of 112.38 places them in second place, .45 points behind the Canadians.

However, the American team still won the overall gold medal, because they had a five-point cushion going into the free dance after Moir slipped and fell on his backside in the short dance.

"It's unfortunate there was a mistake," Davis said on Tuesday. "But it's human nature to have errors once in a while. I'm sure it will be fixed now."

She said the error changes little in their approach to training or to their next two competitions.

The ISU said in a release that its system had miscalculated the grade of execution (how well a move is executed) for a combination lift in Virtue's and Moir's free dance, using last year's schedule of points. The schedule was updated last July.

The ISU said the calculation program was updated immediately afterward and random checks of other international results showed no irregularities.

"It wasn't really a big deal to us," White said. "We didn't want to make a lot out of it. There isn't much to be made, really."

Still, the overall second place stuck in Moir's craw. At the event, he blurted: "We're not happy. We felt like we laid down a good skate," he said at the time. "In our opinions, it was a good enough skate to win and obviously, we were missing something.

"It's tough to swallow, especially when Tessa and I have had probably our best fall to date and this is the best start of a season that we've had."

He said defeat was a lot easier to swallow when they had returned from injury and their training was compromised. But this season, they were injury-free.

"Scott has a little bit of a history of making off-the-cuff remarks," White said. "We were able to make light of it. It wasn't a big deal.

"We're going in as competitors. ... Of course you want to win. Do I think he wishes he hadn't said that? I do think that."

He said there are no hard feelings between the teams because they train together, are close friends and discuss things. Things might be more sticky between them if they skated at different rinks, White said.

"I can understand what he said," White added.

"We try to be supportive of each other and I feel that he is very supportive of us in the training atmosphere and at competitions. It's a little bit unfair for the media to get that little pique in that moment."

Although Virtue and Moir are Olympic champions, Davis and White remain undefeated over the past two seasons, but their scores are always close.

The two teams did not meet each other until the Grand Prix Final in Quebec City, but all season long, the Canadians have chalked up higher scores in the two short dances they did during the international season, while the Americans got higher marks in their two free dances.

At the Grand Prix Final, that trend switched. 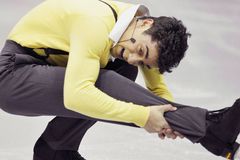 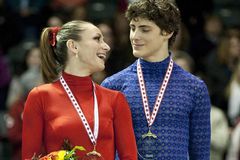