The 34-year-old from Brantford, Ont., played in three World Cups, a hard-charging back-row forward and hooker who always led by example.

Carpenter broke World Rugby Hall of Famer Al Charron's Canadian caps record when he earned his 77th in a loss to Romania in June 2017.

He made his debut in May 2005 against U.S. and last represented Canada in November when he suffered a head injury in a win over Spain. It was the third head injury in a short stretch of time, with the other two coming in club play with England's Doncaster Knights.

"They weren't the hardest of hits," Carpenter said in an interview. "I just thought if there is something going on, I need to stop playing this game and not put myself in any more risk for injury. I have a family."

"I just think the risk factor of continuing to play a tough game like rugby, putting my body on the line further just wasn't worth it for me," he added.

He had other concussions earlier in his career, when head injuries were not understood as they are now.

"You got your bell rung and you went back out there and played," he said.

While the issue of concussions is treated far more seriously these days, Carpenter says they are still hard to comprehend because "you don't see the injury."

"My arm's not in a cast or something," said Carpenter, who still feels concussion-related symptoms. "People overlook it and they expect you to be the person you were before the injuries."

Listed at six foot and 235 pounds, Carpenter was a tough ball of muscle who often looked to run through opponents rather than around them.

Carpenter is tied for fourth in Canadian try-scoring and leads all Canadian forwards with 17 international tries, the last coming at the 2015 World Cup when he bulled his way over the goal-line against France.

The 2011 World Cup remains his favourite tournament, taking place in the rugby hotbed of New Zealand.

"We were getting stopped in the street for kids who wanted to do hakas for us," he recalled.

Carpenter scored a try in a memorable 25-20 win over Tonga in Whangarei.

"Aaron was amazing," said former Canadian winger Phil Mackenzie, who roomed with Carpenter when they played for English club side Coventry.

While his health was the main factor in his retirement decision, Carpenter also said he wanted to leave the game at the right time knowing a younger generation of players is coming through.

Carpenter also acknowledges a "bit of relief" in his decision.

"From when I started playing rugby to where it is now, the injuries have gotten worse and worse. I don't know. The guys are getting bigger, stronger, faster."

He put his body on the line and paid the price. He broke both arms and routinely wakes up to a sore back.

"It takes its toll. It's a career of 13 years of getting beat up basically. But I wouldn't change it. The experiences I've had. I've got to travel the world. I've got to meet some pretty outstanding people.

"If I have to pay for that with a few years of being sore and pain, I think it's worth it."

"I got to see my fair share of England, saw the sights and got to know the people," he said. "It was a good time but it was good that it's come to an end because you get homesick for a while and we were at that point."

Carpenter, whose wife is a teacher in suburban Toronto, has his hands full with three kids aged one, three and five. But he says the retirement has yet to sink in.

He still hopes to stay involved with rugby and currently is working with the Ontario Arrows team.

Rugby Canada was quick to pay tribute to Carpenter, who captained Canada on more than two dozen occasions.

"On behalf of the Rugby Canada board of directors I would like to congratulate Aaron on his impressive career," chairman Tim Powers said in a statement. "He also deserves our deep thanks for the commitment he made to his country and rugby in Canada."

"Aaron has been a true servant to Canadian Rugby for over a decade," added Rugby Canada CEO Allen Vansen. "For a Canadian to win 80 caps is an incredible achievement and Aaron always represented his country with honour, pride and respect, especially doing so as captain on a number of occasions." 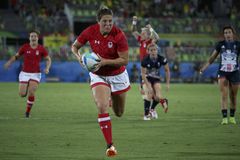 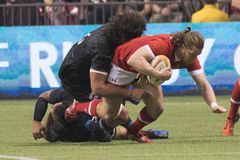 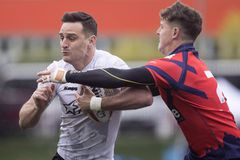