It was to be a grand day in the history of Canadian tennis, a Davis Cup battle on home court, young star Milos Raonic versus daunting French rival Jo-Wilfried Tsonga.

Raonic's ascent in pro tennis has been dizzying enough that the world No. 29 was given a fair chance against Tsonga, a power ranked No. 6.

It would have been a showcase for the sport in Canada, the country's best-ever singles player against one of the world's best, broadcast live on Sportsnet, bolstered by a raucous sold-out crowd of 5,000 or so in Vancouver. Instead, news that Raonic wouldn't play emerged less than two hours before the match. He withdrew on the advice of doctors, his left knee stung by a "minor" injury. His replacement, Frank Dancevic, performed with spirit but was badly overmatched, beaten in straight sets by Tsonga.

The win propelled France to victory over Canada to advance to the quarter-finals of the Davis Cup world group against the United States.

Raonic watched from the sidelines.

Whether he'll play this week in San Jose is unclear. He had been set to defend his first major title at the SAP Open – SAP also being one of the 21-year-old's major sponsors. Raonic is scheduled for an MRI at Stanford Medical Center on Monday after flying to San Francisco in the morning.

In a six-minute news conference with reporters late Sunday afternoon, Raonic indicated he really didn't know what's wrong. He had been dealing with some soreness in his left knee, which was aggravated playing doubles on Saturday. He found it difficult to push on the knee when it was bent, which hampered key aspects of his game, including his serve.

A key person in the decision will be a doctor in Spain, Angel Ruiz-Cotorro, who works with Raonic and other stars such as Rafael Nadal.

"As many people will know, no matter where you get it checked you're going to get a lot of different opinions about what you need to do and what the problem is," Raonic told reporters. "The first thing on my priority [list] is figure out what the problem is. And then the second thing is go to the people I trust and figure out a solution."

For Canadian tennis, it was an awkward end to what began as a promising weekend. It was the first time in eight years that Canada had appeared in the top-tier world group of the Davis Cup, and only the fourth time ever. A playful but meaningless two-set match between Vasek Pospisil and Gael Monfils finished the competition Sunday. While fun for fans, it was a disappointing conclusion.

On Friday, Raonic scored a powerful straight-sets win in singles to tie Canada at one with France in the best-of-five.

The team gambled and put Raonic in doubles with Daniel Nestor on Saturday, instead of Pospisil, hoping to jump up on France 2-1. But Raonic hurt his knee late in the first set, and Canada lost in straight sets. Tsonga's win Sunday gave France the third victory it needed to move on.

Questions swirled about the strategy to play Raonic on Saturday, and of the tension between playing for one's country and for one's self, especially in tennis. A team/country competition such as the Davis Cup is unusual in the sport.

"I might be the face of Canadian tennis but we're here as a team," Raonic said. "This is a team event."

On the timing of the injury, Raonic said it could have easily happened in a singles match against Tsonga.

Raonic, who stands 6-foot-5, weighs about 200 pounds and turned 21 barely a month ago, has battled injuries during his ascent in tennis. He has two singles titles, the most recent in January in India, but last June had to withdraw from the first set of a second-round match at Wimbledon and thereafter had hip surgery.

Dancevic, ranked No. 178, said Raonic made the right decision.

"If doctors tell you, 'You know, you should just take it easy the next couple days,' you want to take that advice," said Dancevic, a 27-year-old from Niagara Falls.

"Even though I know Milos loves playing for Canada, and he would have played out there if he really could, he had to make the right decision for his career," said Dancevic, suggesting that a gamble on a wobbly knee for one match – even a big one – was foolish.

"He's a young guy, he's hot, he's playing unbelievable tennis lately, and he's got a long career ahead of him," Dancevic said. "Some times you've just got to make the right decision." 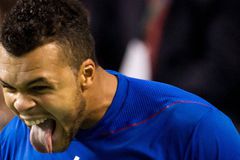 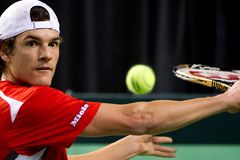