St-Pierre, a longtime advocate for improved testing, spoke out in the wake of former middeweight champion Anderson Silva testing positive for two steroids.

The 33-year-old from Montreal opted not to say much on Silva, saying it was not his style to kick a man when he's down.

"I feel very sad for Anderson Silva," he offered.

MMA needs to model itself after Olympic sports, he said.

"They have random testing and the testing is done by a competent and an independent organization (the World Anti-Doping Association) that has no interest financially in the promotion of (the sport)," he told The Canadian Press.

MMA drug testing is usually carried out by state or provincial athletic commissions. The Nevada State Athletic Commission, for example, carried out the out-of-competition test on Silva in California last month.

That test was paid by the UFC, given that Silva was preparing for UFC 183.

In Nevada, that money goes into the state's general revenue fund.

St-Pierre says having an organization serving as watchdog over an event that brings it money does not make sense.

"I believe the athletic commission is doing a much better job now that it did in the past because they do random testing," St-Pierre said. "But they still have a lot of room for improvement."

Bob Bennett, executive director of the Nevada commission, said essentially the same thing in an interview this week.

Bennett acknowledged the current drug-testing policy is not all-encompassing but "at least it levels the playing field and lets the fighters and the promoters know that we have a pretty intensive performance-enhancing drug policy, even though there's always room for improvement."

St-Pierre says the current system did not work with Silva because UFC 183 went ahead as planned with Silva in the main event. Test results were not made public until after the fight.

"The fight should be cancelled because it's cheating, it's a biological weapon that you have," St. Pierre argued. "If I fight someone with a knife and the promoter and the organization know I have a knife. I'm bringing a knife into the fight, they should not let me fight because I'm carrying a weapon.

"A performance-enhancing drug is the same thing, it's a biological weapon. It's an advantage that you have over your opponent that you should not be able to compete with. Because you put the health of the competitor in jeopardy.

"We're not playing golf, we're not racing, we're fighting. Every time we fight we put our lives, our well-being in jeopardy."

In Silva's case, it appears the test results were not ready in time.

The head of the WADA-accredited Sports Medicine Research & Testing Laboratory in Salt Lake City which analysed the Silva sample told Yahoo Sports that complex tests take time. Daniel Eichner also noted that samples, taken by a WADA-certified collector, are identified only by number as per protocol and that the testing process operates without deadlines.

St-Pierre has not fought since a controversial win over Johny (Bigg Rigg) Hendricks in November 2013. He subsequently stepped away from the sport, saying his life had become "completely insane."

The UFC vacated his 170-pound title, which currently belongs to (Ruthless) Robbie Lawler.

St. Pierre said if he decides to return to action, he will insist on random drug-testing by "an independent and competent organization" with VADA (Voluntary Anti-Doping Association) as one option.

But he said he has made no decision on his future.

St-Pierre, who has kept training, says he has completely recovered from knee surgery last year. 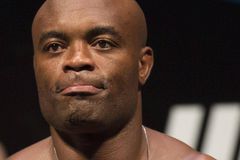 Should we be surprised by latest MMA doping scandal?
February 4, 2015 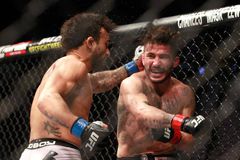 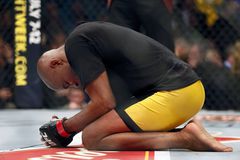 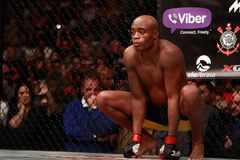 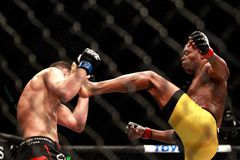