Despite his accomplishments in the Octagon, mixed martial arts star Georges St-Pierre insists he will be the challenger when he faces Carlos Condit at the Bell Centre.

St-Pierre will have been out of action for 19 months when he defends his Ultimate Fighting Championship welterweight title before a home crowd in UFC 154 on Nov. 17 at what will likely be a sold-out Bell Centre.

During St-Pierre's layoff, Condit defeated Nick Diaz for the interim championship. Their showdown will settle which of them is really No. 1 at 170 pounds.

"In my contract, I was supposed to defend my title every year and I couldn't do it because of my injury, so the champion to me is Carlos Condit," St-Pierre said to applause from about 200 fans at a news conference Thursday at the Montreal Science Centre.

"I'm not the official champion," he said. "Georges has been such a dominant champion over the last couple of years that until someone beats him, he's the undisputed champion.

"That's my mindset. Until I beat him, I don't feel I'm a true champion."

Neither of them could be called a hothead, and that was the closest they came to a disagreement. St-Pierre even called Condit "a gentleman."

But he also said that opponents who don't use trash talk are often the toughest in the cage.

"He's very well rounded and smart," St-Pierre said. "He adapts well to any style of fighter, but I'm going to take care of business.

St-Pierre (22-2) will defend his championship belt for the seventh time.

He has won his last nine bouts, but hasn't fought since he beat Jake Shields in Toronto in April, 2011 due to a knee injury that required surgery. He acknowledges there will be some ring rust, but he said the knee is 100 per cent healed and he is confident he has not lost a step.

Even before the injury, he said his energy was fading and knew he needed to change a few things in his training and his approach to fighting. That's what he did during the layoff.

"I was going (to training) because I had to, not because I wanted to," he said. "I lost motivation.

"I learned that in your career, sometimes you need to break something and fix it before it breaks by itself. I didn't need to lose a fight to improve my training schedule. I needed to stay on top before the fight game catches up to me. That's what the long layoff allowed me to do. To think about stuff.

"I'm very glad to be back. I changed a lot in my training and in my life and I've never been so pumped up."

Both fighters normally have Greg Jackson in their corner, but the veteran coach will not work either corner for this fight card. St-Pierre said it won't matter.

"I like to have Greg in my corner, but we'll both have the same problem," he said. "The corner doesn't really matter.

"Even if the Pope or my grandmother was in my corner, the truth is that when you come back after a round you're exhausted. You have maybe 20 seconds where the person can tell you what to do or change your strategy. The rest of the time your just recuperate."

It will be daunting for Condit to fight in front of a full house that will be almost entirely on St-Pierre's side, especially against one of the top stars and top pay-per-view draws in UFC. But he relishes the role of "the bad guy fighting in an opponent's home town.

"When I fought in my home town it was probably the most nervous I've ever been, the most pressure I've ever felt," he said. "When I fight in someone else's home town I feel it's my fight to win.

"No pressure. I just get to go out there and perform to the best of my ability and not worry about anything else."

It will be the fifth UFC card held in Montreal and the third one with St-Pierre in the main event.

"It helps our fans because they can plan their travel and their schedule," Wright said. "And we feel it's important to have that kind of consistency to our schedule to allow our fans and business partners to manage their relationship with us."

UFC boss White unaware of NHL lockout, but says he never like such disputes
September 23, 2012 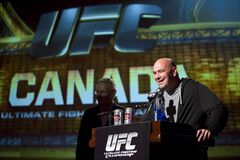 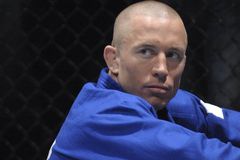 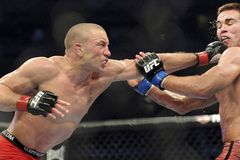