For another tennis player, with a different personality, the hoopla might be a little distracting.

Depending on which British newspaper you read this morning, Eugenie Bouchard is either the "queen of the court" at Wimbledon, or the next Maria Sharapova. Either way, it's clear that England – a country in dire need of a sporting hero – has decided to rally around the 20-year-old pride of Westmount, Que.

After a desultory performance at the soccer World Cup (England failed to make it out of the first round for the first time since 1958), sports fans here were hoping to get a lift from Wimbledon, with Scotsman Andy Murray given decent odds of defending his 2013 crown.

But Murray crashed out with a straight-sets loss in the quarterfinals to Bulgarian upstart Grigor Dimitrov, casting yet another pall over the mood of England's sportscasters, bartenders and taxi drivers.

With no Brits left to root for, Bouchard has been embraced by the country's media as the closest thing to a local heroine left in the tournament. Her photo graced the front pages of both The Daily Telegraph and Daily Mail on Friday, with the Telegraph calling on readers to "cheer [for] Princess Genie."

"The British have a new Wimbledon star to follow after Andy Murray's exit," The Telegraph wrote, adding that Bouchard "comes from a family of fervent royalists and is named after the Queen's granddaughter." (Eugenie Bouchard and her twin sister Beatrice are named after Prince Andrew's two daughters.)

The tabloid Daily Mail, meanwhile, found a way to put photos of Bouchard on both the front and back covers of the newspaper, plus an additional picture of her in the sports section. Mixing references to her "angelic" and "cherubic" good looks with descriptions of the tennis match Bouchard played and won on Thursday, the paper predicted that Bouchard's tennis winnings and commercial deals would eventually help her overtake Sharapova as the richest female athlete in the world.

Bouchard brushed it all off with her now-customary aplomb on Friday, saying it was "very special" that the fans at Wimbledon appear to be rallying behind her, but that she's been avoiding newspapers and social media. She's received dozens, if not hundreds, of marriage requests this week via Twitter.

"First and foremost I focus on the tennis. Whatever comes with it, you know, I take in stride. I know it's part of the job," Bouchard said in a press conference ahead of her final match Saturday against Czech star Petra Kvitova.

While Kvitova won in 2011 at Wimbledon, it will be Bouchard's first appearance in a Grand Slam final.

While most of the questions Kvitova faced in her own Friday press conference focused on how she had evolved as a person and a player since her win here three years ago, Bouchard again found herself handling questions about the Sharapova comparisons (she's not paying attention), her broken friendship with British star Laura Robson (she's not talking about it), and which member of the royal family she hoped to see in attendance at Saturday's match (Princess Eugenie, of course – though she's not expected to attend).

Bouchard said she was just trying to block it all out. "I haven't seen any of the newspapers today. It's a good thing – I don't want to see my face, that's fine. I'm going to just stay away from it," she said.

"After the fact, I can reminisce, look back, have good memories of these two weeks. But right now the job is not over… I'm staying focused." 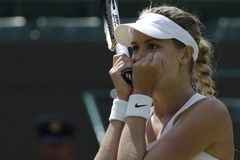 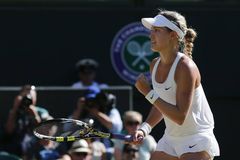 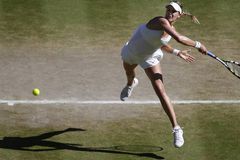