His teammates call him Weight of a Nation, but Ryder Hesjedal has figured out the best way to carry it is to pretend that you're not.

"I'm just hoping to have a good race and be part of it in a good way," he said in a recent interview from his hometown of Victoria before heading to the Tour of Alberta, Canada's first top-level bicycle stage race.

The Tour is a six-day, 900-kilometre race through prairies, badlands, river valleys and foothills, starting in Edmonton and ending in Calgary. Bringing together 15 teams – including six top European pro teams – it carries one of the highest designations from the Union Cycliste Internationale, the sport's governing body.

Hesjedal will pedal against rivals including 2011 Tour winner Cadel Evans and Peter Sagan, one of the fastest sprinters on two wheels.

"These are the world's best cyclists," said race organizer Duane Vienneau. "We've never had a race of this calibre in Canada before, never the top of the top."

It's the result of seven years of dreams and plans, which finally came together when the provincial government decided to kick in half the $7-million cost of the race as a way to glue eyeballs from around the world on Alberta's diverse landscapes and rural communities.

It may just work. The race is being broadcast on Rogers Sportsnet in Canada, NBC in the United States and Eurosport in Europe. Vienneau says 168 million households will have access to it.

Hesjedal says anyone who tunes in is likely to see some close racing.

This summer's flooding in Alberta forced the cancellation of the tour's one mountain stage, so the routes will feature the sort of short, steep climbs that encourage constant attacks. That also means mass sprints to the finish lines, which will keep times close.

Expect riders to battle for every second, especially during sprint sections in each stage that bring the winner a time bonus.

"Even a couple seconds will be important in breaking up that group that finishes on the same time," said Hesjedal. "It's going to be tight racing, with those small seconds being crucial wherever you can take them."

The fact the race is in its first year makes it even more open, as nobody has much familiarity with the roads.

"There's not really a home course advantage," he said. "Everybody's got to figure out their own plan and tactic. It's probably going to make the racing more open and exciting."

Hesjedal got his somewhat intimidating nickname during the 2012 Giro d'Italia, one of the world's three Grand Tour races. Hesjedal won that 21-day grind through Italy's mountains, valleys and coastlines to become the first Canadian to win a major European tour event.

But ever since he rolled into Milan on the final leg wearing the victor's pink jersey, the spokes on the wheel have come a little loose.

There have been good days – he's helped his Garmin-Sharp teammates win some of Europe's biggest one-day events and put in impressive showings in races everywhere from Switzerland to Beijing. Still, crashes, ill-timed flu bugs and courses that didn't suit his strengths have kept him off the podium at the Olympics, this year's Giro and the Tour de France.

Maybe the burden was a little heavy, he concedes.

"When I look back, it was just too much –the whole stretch of the setbacks and trying continually to come back to top form. I think I paid for that in the Tour. I just didn't get to that level in the Tour de France.

"I've been pretty tired, actually, just not at a high level since more or less the Tour. The Tour really took it out of me. I haven't really felt good since then, but I've started to feel okay this past little bit, training after some recovery."

Opponents familiar with his fighting spirit – Hesjedal rode almost the entire 1,500-kilometre Tour this year with a broken rib – may be forgiven if they suspect a little sandbagging as he downplays his goals for the inaugural Alberta event, which starts in Edmonton on Tuesday with a 7.3-kilometre time trial.

"Based on how things have gone since the Tour, I'm not really focused on performing – putting that pressure on 'I gotta win Alberta.' "I gotta give myself the best chance. I've got to get in shape and if I get to the shape I'm capable of I'll have a chance. And you go from there."

Hesjedal said the new Tour of Alberta is ideally timed to build on an emerging pro cycling scene in North America. It comes after a series of prominent U.S. events and just before the Grand Prix races in Quebec.

"That's a significant block of world-calibre racing. I think it's great," he said.

Then he shuffled off a little more of that weight from his nation.

"I'm more looking to enjoy racing here in Canada, being home and enjoying the inaugural event and not really fixate on performing. I'm just hoping to have good legs." 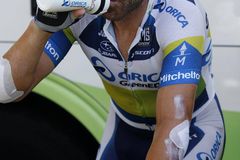