When Elizabeth Newman was training for the Invictus Games, she found that preparing for the competition helped her adapt to the changes that have taken place in her life after being medically released from the Canadian Forces in 2015.

"A team of people has helped put Humpty Dumpty back together," the former medic sergeant said from her home in Sooke, B.C. "I feel like I have a unit again."

Founded in 2014 by Prince Harry, the Invictus Games is an international sporting event for ill, wounded or injured active and veteran service members. This year, 550 athletes from 17 countries are competing in Toronto in 12 sports.

Born in Mississauga, Ont., Newman grew up in Penetanguishene, Ont., and joined the Canadian Forces at 19 as an infantry soldier. In 1999, she became a medic, serving in Edmonton and Vancouver for 12 years. During that time, she did two tours to Afghanistan.

She said her role was to ensure soldiers were "fighting fit."

When she returned from Afghanistan in 2008, she felt "great" physically, but pretended her mental trauma didn't exist. Newman avoided leaving the house and loud social situations like bars, concerts and malls, which made her "hyper vigilant" and "anxious." That probably contributed to her sudden decline in health nearly two years later, she said.

Newman said she became severely ill and fell into a coma a week before the 2010 Vancouver Olympics. Doctors suspect the culprit was Legionnaires' disease, but were never able to confirm it. With her heart and kidneys failing due to sepsis, she said her family was traumatized by watching her nearly die.

Newman had to learn how to walk again when she woke up about nine days later. She said she had to make it up and down a flight of stairs in order to be discharged from the hospital. It took her about five days.

A year after the coma, she was diagnosed with moderate to severe brain injury and post-traumatic stress disorder, which "do not play nicely in the sandbox together," she said. Newman also learned she suffers from synesthesia and a vestibular disorder, which mixes up her senses and affects her sense of balance, direction and time.

"It's changed my identity," Newman said.

Today, Newman can't read, follow a recipe or do groceries on her own. She has chronic migraines. She has lost her hobbies and memories she cherishes, such as the birth of her son. She doesn't sleep well. Even her fears and taste buds have changed.

In 2015, she was given a medical release from the military.

Prior to the coma, she describes herself as a smart girl, noting that she had a photographic memory and could multi-task. Newman wasn't an athlete though.

That all changed with the Invictus Games.

Newman said she decided to apply to participate in the Games after seeing a Facebook update from a friend who did exceptionally well at the second Invictus Games in Orlando, Fla., in 2016.

The Games have taught her to not limit herself and to "say yes to everything." As a result, she said new doors have opened.

These days, Newman freelances as a special effects make-up artist for film and television. Eventually, she hopes to open her own make-up school, where she can teach organizations how to provide "ultra-realistic" injury simulation for medical training.

Recently, the Vancouver Island Health Authority hired Newman to do just that, so doctors could practice responding to various scenarios as part of an advanced trauma life support course.

In March, she began training for the Games with frequent visits to an archery range in Victoria and a rowing machine that her kids and husband bought for her.

"I thought life was getting really good," Newman said. "I was learning how to live my life instead of just surviving it."

This week, Newman is competing in archery, rowing and volleyball at the Games in Toronto.

She said she owes any success she has had to her family, but the Invictus Games have helped her realize that it's not a bad thing that she isn't always successful.

"It's humbling," she said. "I work very, very hard just to be average."

Now, Newman is accepting of her "beautiful broken brain."

"You don't have to be the best of the best to give other people who are struggling hope," she said. "You just have to have enough courage to say, 'I'm worthy.'" 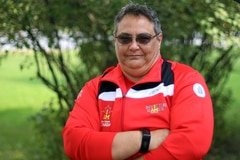 Invictus Games: A soldier’s path from golf course to battlefield and back again
September 21, 2017 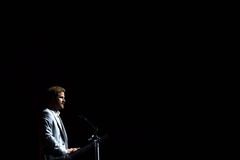