Patience paid off for IndyCar veteran Will Power.

The Australian's decision to use his second pit stop on lap 58 proved to be the difference on Sunday as Power captured his third Honda Indy Toronto title and 28th victory of his career.

"Team called me in just at the last minute and perfect timing," Power said. "I mean, I can't tell you how many times it's gone the opposite way for me at this place and many other places. I was so stoked to see yellow lights as I went into pit lane."

Power previously won the event in 2007 and 2010 and took the 85-lap race on the streets surrounding Toronto's Exhibition Place by 1.5275 seconds.

Brazil's Helio Castroneves was second, ahead of James Hinchcliffe of Oakville, Ont.

It's Power's third win of the season after capturing the second leg of the Chevrolet Dual in Detroit and the KOHLER Grand Prix on June 26. Power was the runner-up last weekend at the Iowa Corn 300.

"As my engineer always says, it's so hard to win," Power said.

"You can never get desperate, you just have to chip away and things just start falling your way. I wish I had the energy that I had when I was in my 20s, but the experience I have now because I'm a much different driver."

Power started the race in fourth after qualifying and the 2014 IndyCar Series champion entered the weekend third in the points standings.

The victory gave Power 51 points and moves the 35-year-old into second on the IndyCar Series standings with 385, trailing only Team Penske teammate Simon Pagenaud, who has 432 points. Pagenaud, who has never won in Toronto, finished Sunday's race in ninth. Castroneves, another member of Team Penske, is third in the standings.

A caution was issued on the 81st lap when Juan Pablo Montoya and Jack Hawksworth crashed into the wall. That helped solidify Hinchcliffe's third-place finish.

It's Hinchcliffe's best result on his home track after placing eighth twice in the first leg of the 2013 and 2014 races. It's also the best finish for a Canadian at the Indy Toronto since 2006 when Toronto's Paul Tracy placed second.

"There's no doubt this is going to be a highlight day in the career reel, memory reel, but hopefully we can better it in the future," Hinchcliffe said. "It'd be so great to win here, but I just always wanted to give the Toronto fans a good result to cheer for because they've been so supportive day-in and day-out from the start of my IndyCar career."

Scott Dixon, the pole sitter and two-time champion of the race, jumped out to a good start and maintained an almost two-second difference between himself and Pagenaud after 54 laps. The New Zealand native slipped off, however, on the last 20 laps.

Defending champion Josef Newgarden hit the curb on Turn 5 during lap 59 – the same curb that caused a caution on lap 45 – and smashed his front right tire. The 25-year-old winced in pain following contact with the wall and did not finish the race.

He was sporting a wrap on his right hand earlier this week as a result of a broken hand and right clavicle caused in a crash at Texas last month.

The track changes to this year's edition of the race had been a common discussion point in the lead-up to the race. Due to construction of a hotel on the Exhibition Place grounds, the pits had been moved, which created tighter space on Turn 11. IndyCar officials announced Saturday morning that the wall in Turn 8 had been changed to the configuration used in previous years, which gave an additional six feet on the inside of the track. 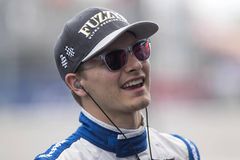 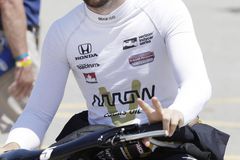