This week, Conor McGregor was asked what he will do after he fights (i.e. loses to) Floyd Mayweather on Saturday. In his humble, deeply considered way, he suggested inventing his own sport. He just has to figure out some basic geometry.

"Maybe I might create my own hybrid of [a mixed-martial arts] octagon and a boxing ring or something," McGregor said. "If anyone wants to challenge me, it'll be in my octagon. Or whatever."

The word he's looking for here is hexagon. It was apparent on the face of the man sitting beside him, Ultimate Fighting Championship (and McGregor's) boss Dana White, that that's not going to go over too well.

While McGregor rambled, White adopted the blank, thousand-yard stare of a man wondering, "How did I get here?"

This is a weird time for White, the 48-year-old former personal trainer who stumbled into a multibillion-dollar combat empire.

The UFC started as a Jean-Claude Van Damme-esque effort to determine which martial art is toughest. It held its first big event in 1993.

In its early days, it was indistinguishable from its first family, the Gracies, a clan of Brazilian jiu-jitsu fighters. The Gracies weren't riveting brawlers. Their fights often ended after a long, quiet struggle on the mat. It was like watching a boa constrictor consume a pig.

But they were self-evidently tough and, more importantly, different. This was a sport suited to the ethos of the new century – over-the-top and unapologetically vicious. Nobody in UFC was ever going to be caught talking about player safety and the danger of head injuries. It slotted into the grungy space that sports such as football, hockey and boxing were vacating.

UFC built up a roster of the sorts of people pugilism had abandoned in its long quest for respectability – thuggish louts such as Chuck Liddell, Randy Couture and Tito Ortiz. Repulsion was the attraction. The more unhinged the fighters seemed, the bloodier the fights got, the more interested people were.

White showed up shortly after conception and, a decade in, persuaded a couple of wealthy friends to finance his takeover of the muddled enterprise. White helped turn UFC into a viable business and smoothed out its hillbillies-in-Lycra edges.

Although he was in charge, White didn't look like a money guy. He emblemized the clichéd MMA fan – a buffed-up suburban douche in an Affliction T-shirt and bedazzled jeans. Although he is now vastly wealthy, the uniform hasn't changed much. Whenever White appears at an event in the lead-up to McGregor/Mayweather, he looks conspicuously out of place – as if a bouncer at a TGI Friday's has wandered into a Milan tailor's shop.

UFC's high-water mark was not reached in any arena but in a lawyer's office. In 2016, White's backers sold the company to the William Morris talent agency for $4-billion (U.S.).

Although the figure was large, it undercut White's long-running claim that UFC was already a bigger deal globally than the NFL. The NFL will make $14-billion this year. Why sell if you think you're sitting on a cash machine that size?

Cage fighting is tough on the body and getting your arm bent 90 degrees the wrong way is more a phase you go through than a career. UFC had no trouble inventing personalities. The problem was maintaining them for the time it took to penetrate the popular consciousness.

Perhaps that's why William Morris left White in charge – he was UFC's only constant presence. You'd look at any one of a dozen indistinguishable no-necked men with cauliflower ears holding up a belt and think, "Which one is he again?"

But White, you knew.

Around the time of the sale, UFC had three potential crossover stars – Ronda Rousey, Jon Jones and McGregor.

Rousey was the most promising of the bunch because she fit the times. She was a modern Marianne going over the barricades to beat the hell out of whoever was standing on the other side. Probably some weasel saying, "But when are you going to fight a dude?"

Rousey was UFC's pleasant, unintended surprise. An enterprise built by cavemen had produced a feminist superhero. People who did not care about the fights – were perhaps even disgusted by them – rushed to embrace Rousey as a two-fisted agent of change. So White did as well.

Not that he was offering her any real money for the favour. UFC is built on the premise that no one fighter is bigger than the brand. Rousey's largest purse was a reported $3-million – about one-75th of what Mayweather made for fighting Manny Pacquiao.

Little wonder that Rousey lost her focus, then her belt and then her reputation. It took UFC three years to build her up. It took two anonymous fighters 107 seconds to tear her down. They could take Rousey's titles, but neither of the women who beat her could take her place – too grim, weak backstory, no charisma. The space she left behind may never be filled.

Where Rousey was the outlier, Jones was the traditionalist – an undefeatable human battering ram, and possibly the most dangerous fighter alive. He was UFC's Sonny Liston, with both the aura and the unfortunate extracurriculars that implies.

Jones was in and out of trouble with the law, with his bosses and with the doping regime. This week, he was dinged again for PEDs – the steroid Turinabol – and will likely serve a years-long suspension.

"It might be the end of his career," White said disconsolately afterward.

Then, there's McGregor. He is the perfected UFC character – a barbarous, preening jackanapes living inside his own reality show. If White has always wanted to be Frankenstein, McGregor is his most bankable monster.

Like many of his predecessors, McGregor wanted free of UFC's contractual constrictions soon after he made it to the top. That battle has been ongoing and involved several threats to retire. In White's world, it's hard to tell which feuds are contrived to drive interest and what's actually bad blood.

When it became clear to White his key human property was determined to move into boxing (and the much larger paydays it provides), he pivoted to take ownership of the decision. White has sold himself as the person who made Saturday's fight happen.

That doesn't ring exactly true. While UFC will get a large, unreported cut of McGregor's earnings for allowing him to fight Mayweather, it is abetting its biggest star's potential escape in order to do so.

After being paid 75 or 100 or however many millions for an hour's work, will McGregor want to go back to getting kicked in the head for a sixth of that?

By Sunday morning, Mayweather will be retired for good and – win or lose (ed. note: it's lose) – McGregor will take ownership of the largest marketing platform of any fighter of any sort in the world.

Why would he hand that asset back to UFC when he could use it to trade his way into Hollywood or Silicon Valley, or bunker down in Crumlin with his cronies and drive a fleet of Bentleys to the pub on a Sunday? After this fight, White's leverage with McGregor disappears. And the Irishman does not seem like much of a sentimentalist.

His bizarre hybrid-fighting idea might actually be serious. Why not? There will always be people who will pay to watch men brutalize each other. All that's required is a full embrace of ugliness and incivility. White's proved it.

What can UFC do after that? By the looks of it, it is thin on ideas. UFC has 36-year-old Georges St-Pierre – who hasn't fought in four years – coming out of a rocking chair to roundhouse some nobody in the head. The cupboard is not just bare. The need to dig St-Pierre out of the recycling bin suggests there's no cupboard to speak of.

Whatever the UFC is making this week, however much reflected glory it thinks it's earned, Saturday's event is a defeat poorly disguised as victory. It's one sport clinging to the coattails of another. And the other one doesn't look so hot either.

In order to take one limited opportunity, White has also created a template for future employees – win a few fights, build a reputation, then go somewhere else to get stupid-rich. It's an invitation to insurrection.

That's the look White had as he sat alongside McGregor – the look of someone who knows this is the peak, and after it may come the long tumble down the other side of the mountain. 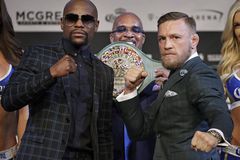 Kelly: The lesson behind Mayweather-McGregor: The low road has high margins
August 22, 2017 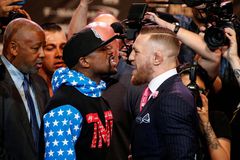 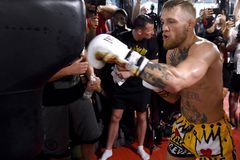