For most of what might be called the PED-era in sports, we've watched any number of examples of how not to react to a failed drug test.

Amongst the more notorious excuses tried out for size by famous athletes – enemies spiked my drink; I ingested nandrolone by eating too much nandrolone-laced veal; saboteurs massaged a mystery cream into my buttocks; I only did all that coke because my girlfriend really likes coke; I kissed someone who does coke; What's coke?

And those are the ones trying to make excuses. Most others pull from the Lance Armstrong playbook – evade; fight on thin, procedural grounds; deny; go silent; then book in an appearance with a sympathetic TV host and start crying.

Since this happens so often, and always to people with enormous resources of cash and expert advice at their disposal, you'd think they might have refined the process by now. Instead, it always boils down to "Maybe the dog ate my stanozolol?"

Most of the viewing public no longer cares that athletes do drugs. They prove that over and over again by continuing to watch sports. What bothers them is that no one can ever own up to the fact. It's degrading to watch your idols squirm around in public like children caught riffling through mother's purse.

Tennis star Maria Sharapova has just proved there is a simpler and far more effective way.

Ms. Sharapova's camp announced Monday morning that she was calling a news conference to make a "major announcement."

Most onlookers assumed she planned to retire from the sport.

Instead, looking contrite but unflustered, Ms. Sharapova walked up alone to a podium and said this:

"Hello, everyone. Thank you for being here on such short notice. I wanted to let you know that a few days ago I received a letter from the ITF [International Tennis Federation] that I had failed a drug test at the Australian Open. I did fail the test and I take full responsibility for it."

Let's stop it there for a second.

At this point, Ms. Sharapova had already done what none of the many of athletes come before her had the sense to try – announce her own failed test, admit her guilt and accept the blame.

It takes most stitched-up jocks several painful weeks, months and even years to get from the first part to the last. By the time they've managed it, their reputations lay in ruins and no one gives a damn about the "Why?" any more. People have already written them off as juicers and moved on.

Ms. Sharapova ran that gauntlet in 23 seconds. By being forthcoming, she primed people to believe what logically comes next – the excuse.

Ms. Sharapova tested positive for a drug called meldonium. According to her, she's been taking this "medicine" under a doctor's prescription for the past decade to combat "several health issues," including an "irregular EKG (electrocardiogram)." Meldonium is a non-FDA-approved drug used in the former Soviet republics to treat heart disease. It may also have performance-enhancing qualities related to endurance. The World Anti-Doping Agency had just included it on its list of prohibited substances, along with dozens and dozens of others. Ms. Sharapova said she was not aware of the change.

Is that true? I have no idea. Neither do you. This is where we bring our own biases to bear.

If you are inclined to suspect that everyone's a liar pushing their own agenda, it won't have mattered what Ms. Sharapova said or how she said it. So she wasn't talking to you in the first place.

If you are a forgiving sort – like most people are – you believe her. Why would she lie? If she is, she'll surely be caught out. And why go to so much trouble lying? If someone in her position wanted to do PEDs, you suspect she'd be a lot smarter about it. She'd be on a boutique cocktail designed in a lab in Geneva. Instead, she's gaming the system by taking dodgy, easily detectable heart meds from Latvia? Some things sound just dumb enough to be true. This is one of those things.

If you play it out long enough, doubt will continue creeping in. We've been conditioned that way. Every time that happens, you'll go back to the beginning – she admitted it and took responsibility. It doesn't exculpate her, but it's a powerful convincer.

Even if you can't quite get there, you're left admiring the way she handled the reveal. It wasn't a breakthrough in public relations, but it seems that way because no one else had the brains to give it a go.

In the end, I suspect this incident will burnish Ms. Sharapova's legacy. This has nothing to do with her tennis. Her place in the second tier of the pantheon is both secure and, at this late point, unimprovable. Though she's one of only ten women to win all four major tournaments, no one will ever talk about Ms. Sharapova as one of the true greats.

What they were going to remember is the way she leveraged her off-court image into a corporate operation. If playing pro sports is a job rather than a vocation, few athletes have ever done it better than the 28-year-old Russian. Ms. Sharapova's been the highest-earning female athlete in the world for 11 consecutive years, having made somewhere in the region of $300-million (U.S.) during that time.

She managed it by staying slightly above the fray. In a sport that encourages its participants to cycle through the full spectrum of emotions, Ms. Sharapova was always icy.

She didn't seem that way on Monday. Though fully in control, there was a real sense of someone reaching out and hoping to be accepted.

By simply getting out in front of a bad story, Ms. Sharapova has added the human dimension her long career lacked. It may in the end be her most replayed highlight.

By helping herself, she's also helped others. Whether she's guilty or not, Ms. Sharapova's canny performance is now the "How to" media guide for all her corner-cutting colleagues who have yet to be caught. 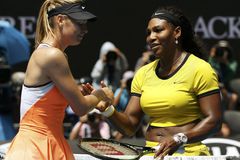