Demian Maia's star was on the rise in the UFC's welterweight division, with president Dana White even talking about the possibility of a title shot for the Brazilian jiu-jitsu black belt.

Jake Shields put a big roadblock in the way of those lofty aspirations.

The veteran edged Maia for a split-decision win Wednesday night in the main event of UFC Fight Night: Maia vs. Shields. Shields won by scores of 48-47, 47-48 and 48-47 in a moderately-paced five-round affair heavy on stalls and clinches.

Maia entered the fight ranked as the No. 4 contender in the welterweight division, and had won his last three fights in the first round. White had said that Maia would be in the conversation for a title shot against champion Georges St-Pierre of Montreal with a win over Shields.

But Shields, coming off a split-decision win after serving a six-month suspension for a positive drug test, did enough to win in a match lacking action. The two Brazilian jiu-jitsu black belts each had moments of brilliance, but the skills ultimately negated each others' strengths.

Even a crowd in the country where the art was born found it hard to watch, booing in moments that featured precious little movement. Neither fighter came close to locking in a finishing hold.

The key moment came in the third round. With the score tied after two and Maia (18-4) starting to take over, Shields (28-6-1) hit a beautiful sweep to the top that stole him the round and put him in the driver's seat for the remainder of the fight. While he tired over the final two rounds, he did enough to earn the split decision.

"That was one of my hardest two or three fights of all-time," Shields said following the win. "It was up there with Georges St-Pierre and Dan Henderson. The guy's a phenom. I expected that going in. He gave me everything I could handle."

The night's co-feature ended with an incredible knockout, but it was Korean judoka Dong Hyun Kim scoring the highlight-reel finish over heavy-handed Brazilian dynamo Erick Silva.

After Kim dominated the opening five minutes with a top-based grappling game, Silva mounted an impressive start to open the second. A big right hand started off the barrage, and Kim was immediately in survival mode. Yet as Silva rushed forward for the finish, Kim bobbed, weaved and clinched until he could clear the cobwebs.

With Silva launching another heavy left hand, Kim slipped the punch and scored with a left of his own on the button. Silva (15-4) was out before he hit the canvas, and Kim (18-2-1) was the surprise victor, collapsing to his knees in celebration at the 3:01 mark of the second frame.

Kim was awarded a US$50,000 bonus cheque for the evening's clear "Knockout of the Night."

"It was incredible and very difficult because Erick Silva is a very tough fighter," Kim said. "He tries to overpower his opponents. I knew he was going to throw a lot of punches, so I tried to counter the attack from Erick."

A pair of light-heavyweight contests played out in disappointing fashion as Thaigo Silva outclassed Matt Hamill and Fabio Maldonado earned a split-decision win over Joey Beltran in a lacklustre affair.

Silva, who missed weight for the matchup at Friday's official ceremony, was clearly better than Hamill, who was fighting for the first time in 13 months.

While neither fighter particularly impressed, Silva's heavy punches and devastating leg kicks took their toll. Hamill's vaunted wrestling attack was ineffective, and he was punching back for most of the 15-minute affair.

Hamill showed heart in surviving until the final bell, but Silva was awarded the clearcut unanimous-decision win, 30-27, 30-27 and 29-28.

"I think it was a bad fight," Silva admitted. "I had a bad weight cut, which was my own fault. I disappointed the UFC, but I'll make up for it.

"I had many chances to knock him out, but I gassed out. It was a bad fight even though I won."

Meanwhile, Maldonado got off to a slow start, and Beltran slowed as the fight wore on, making for a rather tedious affair eventually won 28-29, 29-28 and 29-28 by Maldonado.

While both fighters were willing to trade blows on the feet, Beltran preferred to fight on the inside and work dirty boxing in the clinch. Maldonado, who works better for distance, inexplicably put himself willingly in tight quarters.

Beltran (14-9) scored a takedown late in the third and finished the fight winging punches at his opponent, but it was a case of too little, too late as Maldonado (20-6) was awarded the win.

"I know he usually likes to slow down the pace to explode in the end, so I had to watch my pace, too," Maldonado said. "I had a few opportunities to finish it but I was always mindful of that.

"I wish I had thrown more punches, boxed more, and hadn't stayed so much against the fence. I did damage there too, but I know the judges sometimes see the fence as a sign of control."

Wednesday's event was attended by a reported sold-out crowd of 6,621 fans, according to UFC exec Marshall Zelaznik.

— Brazilian submission ace Rousimar Palhares (15-5) snapped a two-fight losing streak in emphatic fashion, making Mike Pierce tap out in just 31 seconds. Despite scoring the only submission victory of the night, UFC officials declined to award the Brazilian the "Submission of the Night" bonus, citing his refusal to immediately let go of the hold after his opponent's submission as "unsportsmanlike conduct."

— Bantamweight Raphael Assuncao ran his UFC record to 5-0 at 135 pounds with a hard-fought split-decision win over fellow top contender T.J. Dillashaw. The bout earned both fighters a bonus cheque for the evening's "Fight of the Night." 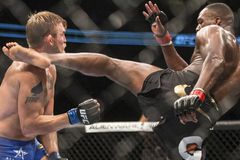 MMA hopefuls look to represent Canada, fight their way into the UFC
September 23, 2013 Main event of UFC 165 showcases the brutality and beauty of MMA
September 22, 2013 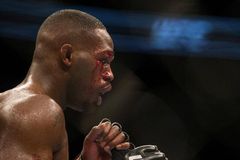