A couple of marathons over a seven-month span is tough enough.

But the lure of a decent paycheque and the opportunity to race in Canada's colours has Rob Watson running four of them, his lung-busting schedule culminating in Sunday's Scotiabank Toronto Waterfront Marathon.

"I didn't plan this from the beginning, when the year started we planned Boston, Toronto," said Watson, who is Canada's fastest marathoner so far this season. "Then things just kind of worked out the way they did. I'm very happy I made it through it this far, I've just got to get through Toronto and then I can take a nice little break and relax. I'm really looking forward to that."

The 30-year-old from Vancouver was the top Canadian at the Boston Marathon, finishing 11th. He then won the Canadian marathon championship in Ottawa, which he added last minute to his schedule because of the $5,700 in prize money.

"In my line of work it's a good chunk of money, that really helped me get through," said Watson, who earns a living through prize money and his part-time job at a running store in Vancouver.

Then, Watson couldn't pass up the chance to compete for Canada at the world track and field championships in Moscow. Ranked 48th going in, he crossed the finish line in 20th.

The schedule took its toll in the weeks after Moscow.

"I was just tired, my legs were heavy and it happened to be during a pretty good heat spell here (in Virginia, where he's trained the past few months), there was a lot of humidity, a lot of things seemed to be working against me," Watson said. "But I've managed to work through it, pull through it, and get some good work in the last few weeks."

Watson has been training on his own in Charlottesville, Va., where his brother Peter coaches at the University of Virginia. He'll pop in the headphones — mostly mid-90s skate punk like NOFX or Hot Water Music — to keep him company on the long runs.

"It can be hard, it can definitely be very hard on the head," Watson said on training alone. "But it makes it that much easier when you get in races, and people are around you, you don't have to think, you just get pulled along.

"Some people give runners a hard time about their music," he added. "But you've got to do what you've got to do when you're running 150 miles a week. It can get a little bit tedious, a bit boring sometimes. But that's the way it is. I love music, music is one of my favourite things in the world."

Watson's best marathon time is two hours 13 minutes 37 seconds set in 2012 in Rotterdam, but he hopes to beat that this weekend. Watson, who's dropped out in the two times he's attempted the Toronto race before, set a goal of high 2:11s or low 2:12s, and said his recent workouts indicate he's on pace.

The 38-year-old Canadian record — the oldest on the national track and field books — looms large over Canada's men's marathoners, and Watson is no exception. He had previously said he would go for Jerome Drayton's record of 2:10.09, but has since scaled back his expectations.

"It would have been nice," Watson said. "But that's three-and-a-half minutes faster than I've ever run, so I don't think we're ready to attack that record. You've really got to put yourself on the line, and I'm just not quite there to risk a huge blowup. So we're going to go out and try and run in the 2:12s, 2:11 high. . .which would be a nice step in my career. Then maybe next time we'll go for the Canadian record."

Two-time Olympian Eric Gillis has also said he has his eyes on the Canadian record. Gillis ran his fastest marathon — 2:11.28 — two years ago in Toronto, to duck under the London Olympic qualifying standard by just one second.

While his focus then was completely on earning that London berth, he can now start thinking about record-breaking runs.

"It's just a different scenario right now that makes me more flexible to be able to do that," Gillis said.

Dylan Wykes of Kingston, Ont., and Hamilton's Reid Coolsaet boast the quickest Canadian marathon times since Drayton. Wykes ran 2:10.47 in Rotterdam in 2012, while Coolsaet ran 2:10.55 in Toronto in 2011. Coolsaet's plans to go for the record in Toronto were derailed several weeks ago when he crashed while mountain biking and broke his collarbone.

After Watson takes his hard-earned break, he's not sure what next season holds. He may run in Boston again, or Rotterdam, which is a fast course and he could "try to knock one out of the park." He'd also like to represent Canada at next summer's Commonwealth Games in Glasgow, Scotland.

Wilson Kipsang of Kenya shatters world marathon record with victory in Berlin
May 11, 2018 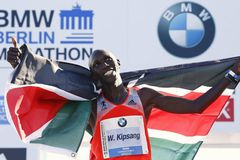