What's wrong with you people? Seriously. You're out there running at all hours, in heat or snow or rain, hacking and sniffling. You spend a fortune on designer running wear. Everybody, it seems, runs in the five-kilometre race for this or the 10K for that.

But nobody – none of you – has run a marathon as fast as Jerome Drayton did 38 years ago.

And Scotiabank has bet $38,000 that it won't be done at the Toronto Waterfront Marathon on Oct. 20, either. That's the prize money that the event's title sponsor has put up for any Canadian runner that betters Drayton's Canadian record time of 2 hours 10 minutes 9 seconds set at the 1975 world marathon championships in Fukuoka, Japan.

Reid Coolsaet, a 33-year-old Hamilton native who trains out of the Speed River Track and Field Club in Guelph and who finished 27th in the marathon at the 2012 London Olympics, turned in a personal best of 2:10:55 at the 2011 race to qualify for London and will take a shot at the purse's symbolic total – $1,000 for each year Drayton's record has stood. The mark is the longest-standing national track and field record on the books. Thirty-eight years ... how much of anything is the same it was 38 years ago?

"The main reason it hasn't been broken is that when Jerome ran it, he was the No. 1 guy in the world," Coolsaet said Wednesday, during a lunch with representatives of several Toronto media outlets. "We might be looking 35 years after Donovan Bailey and Bruny Surin's record [9.8 seconds in the men's 100 metres, set by Bailey in 1996 and tied by Surin three years later] and ask – why isn't that broken? Well, it's because it was the fastest in the world at the time.

"There just haven't been enough Canadians over the years taking quality shots at the record. Some of the guys have had talent, but they're either racing too much or not getting the right races. There are a lot of other good five- or 10-kilometre guys in this country who've never made it to the marathon."

But surely with technology, better nutrition and shoes and diagnostics – "The shoes really aren't different," Coolsaet said. "They're lighter by a couple of ounces. The asphalt's not different. Our drinks are a bit more specific – guys like Drayton were drinking flat Coke instead of the latest power drinks – but when you look at it Coke is sugar and caffeine. Basically the same as the stuff we're taking.

"If there is an advantage I have over the guys from the '70s, it's altitude training. I'll train for the Scotia in Guelph, at sea level, but I have an altitude tent that I'll use."

Coolsaet, Antigonish, N.S., native Eric Gillis and Dylan Wykes represented Canada at the London Olympics – Wykes, from Kingston. Ont., also made the qualifying standard at the Toronto race – with Wykes finishing 20th in a time of 2:15.26. Coolsaet was 27th at 2:16.27 and has targeted the Toronto event, part of the strategic planning most high-calibre marathoners go through. He is not ruling out competing in the 2016 Rio de Janeiro Games, either.

Coolsaet has also done some math that has raised his hopes: the average number of marathons it took the Top 16 Olympic marathoners to turn in personal bests was 8.2, with a mean of 8 – ruling out, as Coolsaet suggested, any extremes. Coolsaet's most recent marathon was in Rotterdam, the Netherlands, where he pulled out at the 30-kilometre mark of the 42.195-km event with bronchitis. That was his sixth marathon, so he might be forgiven for feeling that he's closing in.

As for the next Olympics?

"As long as my motivation is still here and I feel healthy, I'll keep going," he said. "If I'm healthy and my performances start declining ... then it will be hard to stay motivated. At that point, I'd probably move to ultra-marathons.

"Right now, everything is focused on running as fast as I can. That's why I chose Rotterdam and not Boston, and why I'll run the Scotia in the fall. New York's on my bucket list, but it's not really known as a fast course. I'll just keep choosing races that way until I can't run or achieve my time.

"My time's has been the same for every Canadian runner at his level for 38 years." 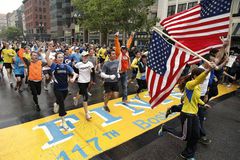