Milos Raonic won his first ATP tour title 3 1/2 years ago in San Jose, Calif. It was the first for a Canadian man in 16 years.

I watched that final in the living room of Raonic's childhood coach, Casey Curtis. He was a shrieking, writhing, fist-pumping wreck through much of it.

"Daddy, no screaming in the house. Daddy!" his then-seven-year-old daughter, Summer, reprimanded him at one point. He kept screaming.

When it ended, a barrier had been crossed. Since the kid from Thornhill, Ont., had been advertised for so long, the feeling was more one of relief than celebration.

You don't hear much about that SAP Open any more, but that was the night Raonic moved Canadian tennis from the "Here Be Dragons" section of the sporting map back into civilization.

That was also the moment of greatest promise. He was ranked 59th. Who knew what he could do?

He's gotten steadily better, but the progress is more incremental. This year's Wimbledon was arguably the highlight of his career – his first semi in a slam, and at the game's most glamorous tournament. That's one way to look at it.

The other is that it was the moment when he was unseated as the most celebrated Canadian in tennis. Raonic has won six career tournaments. He's sixth-ranked in the world. He's done everything he promised. He's still only 23.

Nonetheless, he's been eclipsed by Eugenie Bouchard – if not in terms of ranking, then certainly in the public imagination. She appears to have a path toward becoming world No. 1, and perhaps in short order. He still has three of the greatest players of all time to climb over, and that may never happen. Raonic has played Roger Federer, Rafael Nadal and Novak Djokovic a total of 13 times. He's never won.

For someone so young, there is a growing sense of thwartedness about him.

It wasn't supposed to turn out quite this way. He'd imagined something different. That was the brooding Raonic who appeared on Monday at the Rogers Cup, less than 24 hours removed from a title in Washington.

You expected some satisfaction with a job well done. There wasn't much of that. Or any. The easy smile isn't so easy these days. He still has the mien of a physically precocious teenager – baby-faced, voice cracking. But he's entering the troubled-artist phase of his career.

To give the ceremonies some sort of official feel, Raonic was first presented with the very random-sounding "top-10 official recognition award that goes to all top-10 players." He glanced at it briefly, like he was trying to figure out which drawer to toss it in, then handed it back.

He was offered a variety of chances to grandstand about how far he's come. He swatted every one of them back.

After Wimbledon, there is a break in the tour. Most top players use that as an opportunity for a vacation. Raonic returned home in what sounds like a state of misery to train by himself. He couldn't bear the thought of returning to his familiar haunts. Instead, he worked out at Toronto FC's suburban practice compound, which has no tennis-specific facilities. He entered a short period of monkish retreat from the world.

"There were no tennis players around … only soccer players," Raonic said. "I was sort of isolated from everything that might be day-to-day tennis news."

We all thought of his straight sets, semi-final loss to Federer in London as a national triumph. He clearly thinks of it as a personal failure.

He wanted to "use that anger that built up after what happened at the end of Wimbledon to motivate myself."

"Frustrated" and "anger." Those aren't words we associate with Raonic, generally speaking, and certainly not right now. We're all having a giddy kitchen party about how far Canadian tennis has come. One of the guests of honour is sitting over by the sink, seething.

There are two varieties of elite athletes in individual sports – the ones who expect to win, and the ones who know they will. As time passes, you watch most of the former coming to terms with the fact they'll never be the latter. Eventually, most achieve a tired, genial acceptance. They go from comers to hangers on. They may win a few, but they'll never be the player who arrives at every single tournament thinking, "I've got this."

Raonic currently exists between those two states. He may linger there for years. This is the most difficult time of all – not knowing what exactly you are as an athlete.

Three and a half years ago, Raonic was an anonymous kid riding a wave, and he seemed happy. Today, he's much closer to shore, fighting the strengthening current, and he seems tortured.

This is a species of fear. You fear that you won't be the professional you'd hoped.

"Fear … is like fire," that noted sports philosopher, Mike Tyson, once said. "If you can control it, it can cook for you. It can heat your house. If you can't control it, it will burn everything around you and destroy you."

Raonic is grappling with that now. He isn't playing tennis any more. He's trying to harness his fear, and use it to propel him to the top.

Editor's Note: A previous version of this story incorrectly stated the hometown of Milos Raonic 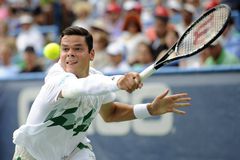 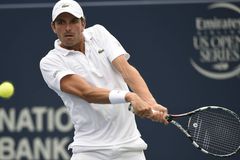 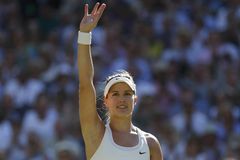