Milos Raonic entered uncharted territory for a Canadian men's tennis player this year, reaching the top 10 in the world singles rankings and leading the Davis Cup team to unprecedented heights.

He also won two tournaments in 2013 and thrilled Canadian fans by reaching the final of the Rogers Cup last summer. He capped his impressive year Thursday by winning the Lionel Conacher Award as the 2013 Canadian Press male athlete of the year.

Raonic made some big strides this year despite going through some early-season struggles and a coaching change.

"The fact that I was performing under those circumstances when things weren't the best leading into those events, it's really great for me," he said. "It's what I'm most proud of."

Raonic finished with 45 per cent of the vote in balloting of sports editors and broadcasters across the country. Calgary Stampeders running back Jon Cornish was well back at 22 per cent, followed by golfer Graham DeLaet (13 per cent) and figure skater Patrick Chan (eight per cent).

"Raonic had the most successful year in the history of Canadian tennis and his outstanding performance in the Davis Cup played a leading role in the country's semifinal appearance," said Yahoo Canada's Steve McAllister. "Raonic's climb up the ATP Tour rankings happens in an era that features more depth than ever before."

Raonic finished second in last year's voting behind cyclist Ryder Hesjedal. He's the first men's tennis player to win the award, which dates back to 1932.

"To have them vote (for) me and tell my story back home and being so positive about it, it's really great to see," Raonic said when reached after a training session in Monte Carlo. "To (be) recognized through an award like this means a lot to me."

A number of women's tennis players have won the Rosenfeld Award over the years. Aleksandra Wozniak was the last to do so, taking the honour in 2009.

Raonic won indoor hardcourt tournaments in Bangkok and San Jose and finished with a 45-21 singles record this season, picking up more than US$1.72 million in prize money along the way.

Known for his booming serve, the six-foot-five Raonic showed improvement in other facets of his game in 2013. His ground strokes, backhand and net play were stronger and that helped him to some big victories.

Raonic was ranked 15th at the start of the year and hovered in the teens for most of the season. He rose to a career-high No. 10 in early August before falling to No. 11, where he has remained since.

He won the San Jose title for the third straight year last February after beating Tommy Haas in the final. Raonic also helped the Davis Cup team to wins over Spain and Italy as he endured a stretch of middling results on tour.

The Canadian's power game has always been most effective on hardcourts but Raonic enjoyed some success on clay this season as well, reaching the semifinals at Barcelona in April before falling to Rafael Nadal. However, he struggled on the grass courts and made a second-round exit at Wimbledon.

Raonic managed an injury-free season for the first time since joining the tour and was able to fight through that early-season inconsistency.

"I learned for the first time in the first three years of my career how to deal with the tough moments," he said. "Not any moments disrupted by injury or anything, just like a little bit of a slump, let's say. It gave me a lot of experience and it's helped me grow a lot.

"It's great from the educational side, but then also the way I turned around the second half of the year and really gave myself an opportunity to achieve my goal."

Raonic made a coaching change in the spring with Ivan Ljubicic replacing Galo Blanco, who spent more than two years in the position. An adjustment phase followed before Raonic really got the country's attention with an impressive performance at the Rogers Cup.

With Ljubicic pushing him to play a more aggressive, higher-risk game, Raonic responded with wins over Juan Martin del Potro and Davis Cup teammate Vasek Pospisil before losing to Nadal in the final.

It was a rare run of homegrown success at the country's biggest tennis event as Raonic became the first Canadian to reach the championship match in more than 50 years. He lists qualifying for the final in Montreal — his first Masters 1000 final appearance — and reaching the Davis Cup semifinal as his standout moments.

"The fact that I was able to execute and bring my level up in those moments and to do well, it's important to me," Raonic said.

The Canadian made it to the fourth round of the U.S. Open in September and pushed Richard Gasquet the distance before falling in a four-hour 40-minute marathon.

A trip to Serbia soon followed as Canada continued its historic run in the Davis Cup World Group with its first-ever semifinal appearance. Raonic, who was 5-1 at the international team event in 2013, got by Janko Tipsarevic before losing to top-ranked Novak Djokovic, and the host side later won the deciding match.

"It's really been great what we put together this year," Raonic said. "Doing it in tight moments, doing it at home in Canada and playing well. So really it's special for us to share this moment as a team considering how individual of a sport we are.

"To see four, five, six Canadians doing well, it's a lot more motivating for a country than just to see one."

After the Serbia loss, Raonic came out gunning at his next tour event in Bangkok. He avenged the Gasquet loss and then beat Tomas Berdych for his second tournament win of the year.

Raonic is still trying to break through against the sport's elite. He has won two of three career meetings against Andy Murray but is a combined 0-13 against Nadal, Djokovic, David Ferrer and Roger Federer.

However, Raonic — who turns 23 on Friday — has age on his side. He's the first player born in the 1990s and the first Canadian to crack the top 10 in the men's singles world rankings.

"He's one of the most focused guys on tour," said Davis Cup teammate Daniel Nestor. "Someone who is (turning) 23, I think his maturity is far beyond his years.

"He's really impressive with his positive attitude and real focus and drive to be a champion."

Raonic, from Thornhill, Ont., has spent the last few weeks training for warmup events ahead of the Australian Open next month. He also has his eye on Canada's Davis Cup tie against Japan in late January.

"I think it's just about development," he said of the upcoming season. "Getting better day in and day out and picking up experience through matches, making sure that I'm making the progress and that I'm pushing myself every day, which I do already.

"I think it's just about time and I've got to keep working away."

Raonic wants to crack the top six in the world rankings next year, go deeper in the Grand Slam events and qualify for the eight-man ATP World Tour Finals.

"Even as a junior, he was just aiming high," said Davis Cup coach Martin Laurendeau. "He wanted to be a top-10 player and even beyond that and he just believed it. It was just a matter of giving him the time and opportunities to be able to do that. 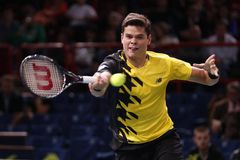 Jon Cornish named Lou Marsh Award winner
December 9, 2013
Report an error
Due to technical reasons, we have temporarily removed commenting from our articles. We hope to have this fixed soon. Thank you for your patience. If you are looking to give feedback on our new site, please send it along to feedback@globeandmail.com. If you want to write a letter to the editor, please forward to letters@globeandmail.com.
Comments