As it gears up for the Rio Olympics, the Canadian women's rugby sevens team has a former world champion in its corner.

Victoria mixed martial artist Sarah Kaufman, a former Strikeforce title-holder currently campaigning in the UFC, has close ties to the women rugby players. They have trained together for years, sharing a strength and conditioning coach, and Kaufman has become a valuable asset in her own right as a teacher.

Wrestling moves, such as double-leg takedowns, translate into tackling skills. Fighting for the ball is akin to fighting for body position. Balance and maintaining a good base are important in both sports.

"It's been a fun relationship," Kaufman said while watching the Canadian team train this week at the Pacific Institute for Sport Excellence where they both work out.

Said Canadian coach John Tait: "She's been a real fan of our program and our program's a big fan of her as well. The girls see what a professional she is in her approach."

Kaufman will be in the stands at Westhills Stadium in suburban Langford this weekend to cheer on the rugby team at the Canada Sevens.

The rugby players, who are centralized in Victoria, often head in the off-season to Zuma Martial Arts & Fitness where the 30-year-old Kaufman teaches and trains.

It helps them get back into contact as well as upping their conditioning, Kaufman says. During the season, it's harder to find time to train together but the five-foot-five 135-pounder has offered some boxing and kickboxing tips.

"It really is just a different sport for them," she added. "And again it's that contact and that power that they get to use, but just in a different sense."

The rugby players follow MMA, often getting together to watch when Kaufman fights. And Kaufman's support for the rugby team is easy to spot on her social media during tournaments.

"It's a great sport to follow," she said. "I really think it's as exciting if not more so than MMA. And there aren't many sports that are like that."

Kaufman (17-4-0 with one no contest) has been a pro fighter since 2006 but is currently rehabbing a shoulder injury sustained during training. She knows her sport, because of its violent nature, does not lend itself to the Olympics because of the time needed between bouts.

But she is leaving her mark on the rugby team.

The rugby players admire Kaufman's character as well as her fighting skills. She wears her heart on her sleeve and while she is not averse to tweaking possible opponents via social media, she is not about to change who she is to earn attention.

"She helps us with ground techniques and really pushes us to a place that is super-physical and demanding," Canadian captain Jen Kish said. "Her work ethic is crazy. I see her train at the gym all the time and she's non-stop so she brings our team a great work ethic."

"I absolutely love working with her," teammate Hannah Darling added.

"She's so determined and such a hard-worker," she added. "You look at her and you're like 'she's doing it by herself' where we have a team to support us. She's completely self-motivated."

Kaufman has fought a Who's Who of female fighters including former champion (Rowdy) Ronda Rousey and current title-holder Miesha Tate. She lost her last two fights, the last by split decision. But her self-belief remains rock-solid despite frustration at the politics of her sport.

"I would say right now I'm in a spot in my career where I've made some mistakes in my last few fights and I've put myself in a position where I don't have a lot of bargaining power [with the UFC] at this moment," she said. "I know that I'm a world-class athlete and I have the ability to be No. 1 again in the world. I have been and that's something I'm striving to get back to, absolutely." 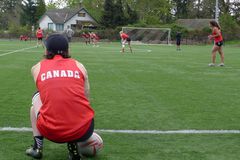 Australia the team to beat in Women’s Sevens Series
April 14, 2016 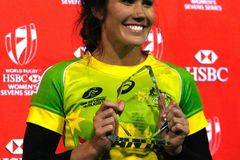 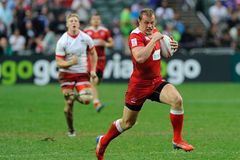