On the walls of the Allandale Recreation Centre, home to the renowned Mariposa School of Skating, hang banners honouring a couple dozen of Canada's figure skating legends, from Brian Orser to Elvis Stojko to Jeff Buttle.

A sign the length of a basketball court is painted on one wall, proclaiming: "Welcome to Quadruple Country."

The historic rink played host to 16-year-old Nam Nguyen this week in a moment of past-meets-future. The reigning world junior champion, expected to pick up the torch from three-time world champion Patrick Chan, won silver at the Autumn Classic.

It was the beginning of what he hopes is a big season.

"I want to win nationals this year," Nguyen said. "Patrick's not here (Chan is taking the season off) and it's an open target for everybody, I have an equal chance to win. . . I'm going to work really hard and I feel if I work hard enough the rest of the season leading up to nationals, I will have a solid chance at winning."

The Toronto skater, who grew up in B.C.'s Lower Mainland, will make his debut on the senior Grand Prix circuit this season, beginning next week with Skate America in Chicago. He'll also compete in the Cup of China.

With Chan out of the picture this season, the spotlight will invariably find Nguyen. Asked if he's ready for it, Orser — Nguyen's coach — laughed.

"Oh yes. He loves it," Orser said. "The bigger the better. That's why I'm so happy that we're out of the junior competitions internationally because it's hard to go to some of those small rinks and there's a handful of people. But then he goes to Canadians and he has a big crowd and he eats it up.

"Last year at worlds in Japan, that was like 19,000 (fans). I brought him (into the rink) about a half an hour before the event, and said 'Lets try to embrace this.' He was digging it, he loved it."

Nguyen was 11 years old when he skated in the exhibition gala at the Vancouver Olympics, charming the crowd in his checked pants and big round glasses.

A year later, he became the youngest skater to win the Canadian junior title. He was four foot nine.

He's grown a full foot since then. He still wears the oversized glasses, but they're fashionable on his maturing face.

He grew more than six inches in the last year alone, and he wears size nine skates, up from size seven a year ago.

"It's tough for a skater, male or female, when you go through a growth spurt, your balance changes, everything changes," Orser said. "Your joints hurt because you get some growth-plate things happening in your knees. But he seemed to manage it OK, we had a couple of little rough spells, but all in all he seemed to get stronger.

"It's been exciting, every time I go to a competition, everybody that sees him they marvel at how tall he's getting. It's cool."

He also mastered a quadruple jump over the summer and landed his first quadruple Salchow in competition to win the Autumn International's short program. That victory in the short program at the Challenger Series event lifted him from fifth to the silver medal. He scored a personal best 159.55 to win the free skate and totalled 225.63.

"I've got it now, yes," he said. "It was hard with my (triple) Axels, took two years, I was growing. Now with my quad it took me one summer, one summer and I have it now. It's exciting to have it."

"One of the advantages of social media is he sees some of his competitors are posting their quad toes and their quad Salchows, that kind of lit a little fire in his belly," said Orser. "He was determined to do this."

"He gets to skate with two of the best skaters in the world, he sees Yuzu and he sees Javi every day," Orser said. "They really skate circles around him, so not only does it help him seeing the jumps, it helps him see the edge quality and the maturity and the Patrick Chan-type stuff that we need.

"Because you can get lost when you're in your own little rink and you don't see that other stuff, and then you think, man these guys are good."

"It's wide open. And it's many months away, and he's on a really good path," the coach said.

He also believes Nguyen will handle himself well on the international Grand Prix circuit, but is taking a patient approach with the young skater.

"I think he fits better in the senior," Orser said. "If he's in the middle of the pack for both of those (Grand Prix) events, we'll be quite satisfied."

Patrick Chan to skip figure skating season, plans to return next year
May 12, 2018 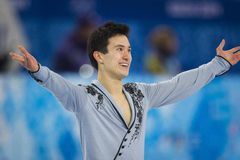 Canadian Olympian Kaetlyn Osmond out for fall skating season
May 12, 2018 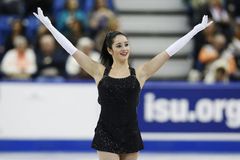 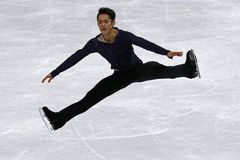