'Hey, it's Rocco from Woodbridge. First-time caller, long-time listener. I don't get these hockey players. Demanding money to play a kid's game. I'd play for free. Why don't they go get a real job? I'll hang up and take your comments off-air."

Sound familiar? Sports-talk radio has been inundated with such calls as the NHL and its players attempt to divide the league's $3.3-billion in revenues. It is the voice of the angry fan denied his hockey, and it's rarely challenged by talking heads. But the presumption of men playing a boy's game misstates the case.

NHL players do not make their money from chasing a puck. They make their money from entertaining the public. That is their profession. No more or less than Charlie Sheen playing an irresponsible goof on whatever his latest show is called, or the plate spinner on America's Got Talent. Whether from gate receipts or, increasingly, television and the Internet, hockey players provide content for networks and diversion for the live customer in the form of entertainment.

If you haven't noticed lately, entertaining – particularly in real time with commercials included – is a lucrative business . The NHL has a $2-billion contract with NBC after having zero guaranteed dollars just three years ago. The other major sports leagues are coining billions more, with networks chasing them to stuff dollar bills in their pockets. This gives the leagues and, by extension, the performers tremendous leverage.

The other common talk-radio gripe comes from the small-business owner, who thinks employees in hockey should act more like the work force in his business. Owners risk the capital, goes the logic, employees are along for the ride. The problem with this analogy is that the players are both employees and the commodity being sold. While the businessman sells hard goods made by humans, hockey is simply humans selling the human product on the ice.

With proper training, millions of people can assemble an engine or run a computer program. But there is a scarcity of Sidney Crosbys and Henrik Lundqvists who can bring people to their feet in excitement or joy. It's all about scarcity. And scarcity is expensive.

Roll away the stone

Now we know what Rogers plans to do with The Score: The Curling Channel! Okay, maybe that overstates things after Rogers announced Thursday that it's getting into the curling business, buying the Grand Slam of Curling franchise from iSport Media and Management.

Sportsnet's other main goal in the acquisition is to start a production wing that will allow Sportsnet to be a player in creating content. With new technologies and services threatening the hegemony on delivery of signals, companies such as Rogers know they must become content providers to survive. (TSN already has its own production wing.)

Hence, the move by Rogers and Bell to purchase Maple Leaf Sports and Entertainment with its precious TV properties of the Maple Leafs and Raptors. Produce those games – and other sports in-house – and you protect the investment even if the public cuts the cable or sacks the satellite.

Maybe it's wishful thinking, but TSN announced its 2012-13 broadcast season with a picture of Los Angeles Kings captain Dustin Brown holding up the Stanley Cup. Except that CBC broadcast that Cup-clinching game last June, not TSN. TSN must believe it has the inside track on the next NHL national TV contract and with it, the Stanley Cup final series. There are many in the industry who'd agree.

A while back, Saturday Night Live had a skit called Bad Idea Jeans, a spoof where men made ill-advised pronouncements such as "I thought about it, and even though it's over, I'm going to tell my wife about the affair" while modelling new jeans. Former Notre Dame football star Allen Pinkett put on his Bad Idea jeans this week. The current Notre Dame TV analyst suggested that the Fighting Irish had too many "choir boys" and needed a few "criminals." Given a chance to restate his opinion on the criminal element lacking at South Bend, Pinkett said, Nah, let 'er rip.

Bad idea. Pinkett was suspended from this week's game against Navy in Ireland. The school is considering firing him. 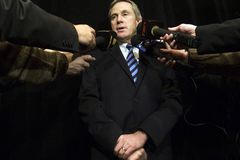 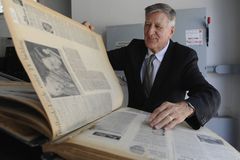 Media less harsh on mistakes made by Olympians, but is that the right call?
August 12, 2012 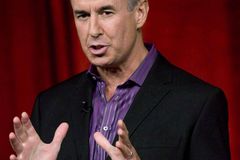