The 21-year-old figure skater from Toronto demolished all world scoring records last April, when he won the men's singles world title. Last weekend, at the Canadian championships in Moncton, he topped them again with stirring performances that had spectators rising out of their seats before he had finished his routine.

It seems Chan is going where no skater has gone before. In Moncton, he scored 302.14 points. Last year, he thought it was impossible to break 300. And it's clear he left some marks on the table last Sunday.

"As a choreographer, I saw small details that need to be fixed," said Lori Nichol, who has designed his programs for several years. "That's a wonderful challenge. There's always more that can be done."

Perhaps there is no limit for Chan.

"I just can't imagine how anybody on earth can be better than that," said Louis Stong, a consultant for Skate Canada. He was in the rink for both of Chan's performances, and the feeling engendered in him was akin to watching famed ballet dancer Rudolf Nureyev, Stong said.

Three-time world and seven-time Canadian champion Elvis Stojko, a proponent of figure skating as a jump-centred sport, isn't so convinced.

A skater "must blow the doors off" to convince Stojko that he's the best ever. And although he concedes Chan has the best choreography and the best edges and transitions of any skater, he isn't blown away by Chan's two quad jumps nor his spins. Technically (on jumping ability alone), Chan is doing what figure skaters did 12 years ago, Stojko says.

Stojko calls Chan the poster child of the new scoring system, with the ability to chalk up points with all facets of skating.

Nichol has led the way, with challenging choreography for the Toronto skater. She could give Chan a simple step, she says, but when you add his speed and depth of curve and the lean he gets on the blade, it makes the move far more difficult.

There is nothing simple about the moves Chan makes between the jumps. He rarely uses simple crossovers to gain speed. There are hops and turns and unexpected changes of direction in his routine.

Stong says Chan has the astonishing ability to pick up tremendous speed quickly, from unseen sources.

"It takes incredible conditioning to do what he's doing and it takes the desire to want to push himself that far, to be able to do that kind of speed, power, depth and intricacy for 4 minutes 40 seconds," Nichol said.

To every student she teaches, Nichol shows videos of 1976 Olympic champion John Curry, with whom she used to skate. Curry, she said, was "a true master of refinement and quality."

Chan is a more powerful skater than Curry was, but Nichol said now that Chan has mastered his power, a "gentler refinement can come into play."

Now that he's 21, Chan is starting to listen more and take charge of his work, particularly with the boost of confidence that came from winning the world title last year.

"He's taken more ownership," Nichol said. "It's like he's not just a kid following and doing what you say any more. He's really getting involved into what he's doing. Once an athlete starts to take ownership, that's when you start to see great growth."

His growth as a performer is only just beginning, she says.

"Congratulations to him [on breaking 300 points]because it's awesome," said Stojko, twice an Olympic silver medalist. "He's one of the greatest shots we've ever had for Olympic gold. And I hope he does it."

With all of Canada's powerful history in men's skating – Donald Jackson, Cranston, Brian Orser, Stojko, Browning and Jeffrey Buttle – Canada has never won an Olympic gold medal in the discipline.

It's on Chan's shoulders now, heading to the 2014 Sochi Games. 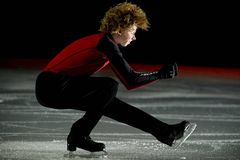 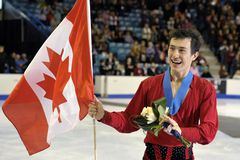 Teenager Nam Nguyen turns heads in his senior debut
May 9, 2018 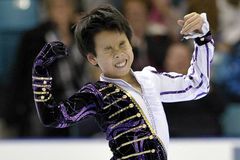 Patrick Chan smashes own record for his fifth Canadian title
April 30, 2018
Follow us on Twitter @globe_sports Opens in a new window
Report an error Editorial code of conduct
Due to technical reasons, we have temporarily removed commenting from our articles. We hope to have this fixed soon. Thank you for your patience. If you are looking to give feedback on our new site, please send it along to feedback@globeandmail.com. If you want to write a letter to the editor, please forward to letters@globeandmail.com.
Comments