Injuries can be a special kind of hell for high-performing athletes, solve one problem and another can be relied upon to unexpectedly pop up.

The thigh bone's connected to the hip bone and all that.

Canadian tennis star Milos Raonic has been bothered by a troublesome foot for several weeks - he had surgery earlier this summer to repair a nerve problem - but said it felt fine in his opening match of the Rogers Cup on Tuesday night.

It's his back that didn't feel quite right - "maybe subconsciously still protecting my foot. So, therefore, compensating," he said - although he added the locus of pain is often a function of what time of day it happens to be.

That's not an excuse, merely a fact. It's clearly one that rankles.

"There's very few things I wouldn't give up for health right now," he said.

You'd never think from the look on the Thornhill, Ont., native's face post-match that he was only a handful of points away from winning.

The eighth-seeded Raonic's return to action after a five-week layoff was never going to be a simple matter, that it came against the ATP Tour's runaway ace leader made it all the harder.

Styles make matches, and Raonic diplomatically acknowledged before the tournament that facing a big-serving, moored-to-the-baseline opponent may not be an ideal match-up for someone who's trying to get back into the flow of things.

Tennis is an unforgiving sport, and in a battle of big servers, the 24-year-old Raonic came up second-best.

As it happens, Karlovic reached the mythical milestone in the seventh game of the second set - he would have 22 aces over all, several of which had Raonic ducking out of the way as the ball zoomed at his head.

And if the 10th-ranked Raonic had hoped to test his problematic foot in the heat of competition, there weren't a ton of opportunities to do it.

The six-eleven Karlovic doesn't tend to engage in long rallies, and though Raonic showed off his potent groundstrokes on a few occasions - he was able to claw back all 10 break points he faced - he wasn't sharp enough this night to prevail.

Raonic has earned a rep as the ATP's tie-break ninja (he plays more of them and wins more than just about anyone else on tour), but in the first he sprayed a couple of forehands wide on early points and lost 6-1.

In the second-set breaker, Karlovic unleashed some sweet returns, and again won 6-1 - Raonic's record in tie-breaks this season dropped to a pedestrian (for him) 16-14.

"I didn't have a single break point. He was playing a little bit better than I was. You sort of saw that difference in the tiebreaks. He got ahead, I gave away a few too many free points," he said.

So the only seeded Canadian player's 2015 Rogers Cup appearance goes into the annals as a 7-6, 7-6 second-round defeat.

"It's very disappointing. I wish I could have done better today, given myself an opportunity to do better in the next round, just give myself a chance to progress," he said afterward, "but it is what it is, you take them as they come."

It may feel like an early exit for an eighth-seeded player, but in fairness to Raonic he's not yet at full capacity.

After reaching the final the last time the tournament was held in Montreal - at the centre where he trained in the national junior program - it's still a bitter pill.

But, as he said, "a poor week this week doesn't mean it's a poor week next week."

"I think I managed well, I think I competed well in the sense of the important moments, especially on my service games. That I have to be happy with," he said.

Raonic said all he hoped to do this week was set himself up for a chance to compete.

Now, it's on to Cincinnati next week.

The question is whether he can get himself right physically in time for the U.S. Open, the season's final Grand Slam.

When asked how far away he is from peak health, Raonic said "that's a different rating every single day."

Pospisil breezes past Lu in first round of Rogers Cup
August 11, 2015 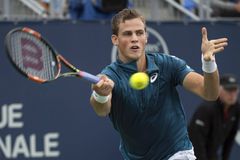 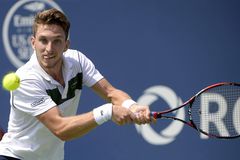 The slump continues, but Bouchard shows signs of life in first-round loss
August 11, 2015 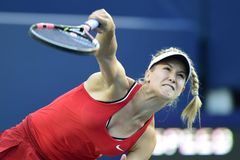