At the Rogers Cup, the artistry usually happens on the court. This year, tournament director Karl Hale also wanted eye-popping visuals outside the sporting arena.

Enter Brendan Murphy, a contemporary painter and tennis fiend who Hale invited to be the tournament's inaugural official artist. Themed 'The Art of Tennis,' this year's Rogers Cup in Toronto will showcase wire sculptures of star players by Toronto artist Rudy Kehkla, live mural creation by Toronto artist David Arrigo and Murphy's colourful exhibition devoted to his favourite sport. Murphy, who divides his time between studios in Brooklyn and Malibu and calls tournament favourite Novak Djokovic a close friend, is making a name for himself as a sports artist. He has painted Djokovic, Andy Murray and Rafael Nadal, and debuts works of Canadian stars Milos Raonic and Eugenie Bouchard in today's Globe and Mail.

Limited edition poster prints hand-signed by Murphy and the stars of the ATP Tour will be for sale, with proceeds headed for the Novak Djokovic Foundation and the Arthur Ashe Learning Center.

An Indiana native who played professional basketball in Europe for five years, Murphy recently spoke with The Globe from his studio in Malibu about his work around this year's Montreal and Toronto tournaments, his coming show and how he combined an obsession for tennis with the spirit of philanthropy.

How did the relationship with the Rogers Cup come about?

I'm a really big tennis fan. The idea came together at Richard Branson's place on Necker Island last fall. He was hosting a high-end charity event and Karl Hale was a guest. We became friends and that's where the idea to incorporate art into the Rogers Cup began. Spawned by Richard, Karl and I, it was a perfect storm of tennis and mutual friends.

I just love the sport. I had a clothing company for a while that gave me access to the tour, as well as being an artist, which I liked a lot more. I did a painting for Rafael Nadal five or six years ago. I didn't know him at the time. I just really admired how he played. We organized a meeting at Indian Wells. In presenting this painting to him, I rolled it out on the players' lawn in Palm Springs. And while I was doing that, Novak Djokovic came over and was quite interested. I said, 'When you become No. 1 maybe I'll do one of you.' We made a friendly bet that if he won the next tournament I'd give him a painting for free. Of course he won. So I showed up at the U.S. Open that year with his painting. We became good friends, and we sold limited edition prints of the work that raised over $200,000 for his foundation. And that started something. In Necker Island, I revisited with Rafa and we did the same thing for his foundation. It's become a really interesting model. And to his credit, Karl saw that energy.

How do you capture the player so at first glance they are recognizable?

I find a photo that is representative of the energy and spirit of the subject, something that captures their aura so you just know it is them. Sometimes it's not that easy. With Arthur Ashe, you have the classic serve. Rafa is easy because you need the racquet over the head and the bandana. Eugenie Bouchard hits the ball differently than anybody. The way she bends her knees and uses her legs on the forehand, nobody else generates power the way she does. I tried to capture that crouch when she gets really low. Nobody does that any more. With Milos, it's his forehand or his serve. He's such a powerful guy. On some level he's the future of tennis – big and fast. I like his energy. He's a cool character. And Roger, he's just the greatest player of all time. As a fan, I'm head over heels for this as a subject, but I also have personal relationships with some of the players. To be able to do some really nice paintings for them, of them, is a real thrill. I have to act cool about it though, which is hard for me.

Leroy Neiman, the expressionist painter of sporting events who died in 2012, was well known, but not a lot of people do what you do.

He walked a very thin line between being a painter and a commercial artist. I'm an athlete and an artist, and I never painted sports until a few years ago. I used to think 'That's his business. It looks a little commercial to me.' But now I really admire and enjoy the subject. When you feel that way it's so much easier to do a painting. I never thought I would be able to do that. I was actually quite resistant to the idea, but now I'm thinking I might be able to pull it off. The painting I've done of Arthur Ashe is the most meaningful thing I've ever done.

I have been a professional painter for 14 years. With art, the more successful you are, the less anyone sees your work, because collectors tend to buy it and put it in their homes. I've always had an interest in sharing my work on a broader scale and the idea that it can raise money is a thrill because it's hard for me to write those cheques myself. It's rare that I get to be involved in anything this cool.

The interview has been edited and condensed 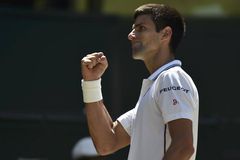 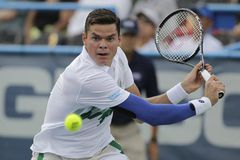 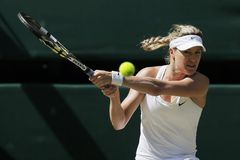