Making the difficult choice to pack up three children and leave beautiful Montenegro behind 17 years ago became the first of many family decisions to shape the path for rising tennis star Milos Raonic.

Today Raonic, 20, of Thornhill, Ont., is the sport's fastest rising star, having climbed the world rankings from No. 303 one year ago to No. 26 today, as he prepares for the French Open next weekend. Raonic spent last winter training intensely at an academy in Barcelona, and announced his presence at the Australian Open in January by reaching the fourth round and inducing a tweet from John McEnroe: "He's the real deal." Moving on to the SAP Open, Raonic used a 240 km/h serve to become the first Canadian since Greg Rusedski in 1995 to win an ATP singles tournament, defeating top-seeded Fernando Verdasco in the final.

His tennis story starts at age 3. The Raonic family speaks passionately about the country they departed in 1994, then a part of Yugoslavia, a small nation of just 600,000 people on the Adriatic coast where they enjoyed the beaches, mountains and mild climate and were surrounded by grandparents, aunts, uncles and cousins.

His father, Dusan Raonic, was a professor of electrical engineering at the University of Montenegro, and his mother, Vesna, was also an engineer. Along with their daughter and two sons, they lived well but Montenegro had become unstable in the early 1990s.

"It was not an easy decision because it's a beautiful country and we had a good life there," Mrs. Raonic said. "But the situation around Montenegro was changing. We thought for our children, and for a professional challenge for us, we needed to go to Canada."

They had a few friends in the Toronto area, but no family. They settled as independent immigrants in Brampton, Ont., when they first arrived.

Fluent in English, both engineers quickly found jobs, Mr. Raonic in research at the University of Waterloo, driving 70 kilometres west to Cambridge;, Mrs. Raonic at a bank in Scarborough, trekking 50 kilometres east. Jelena, 12, and Momir, 10, took naturally to helping care for three-year-old Milos, who spoke only Serbian, but was learning quickly.

"Our kids often tell us today, 'You guys did a great job,' because it was a big challenge to go overseas with three small kids," Mrs. Raonic said. "They had everything there. We had to start with simple things. But we are so lucky, it all worked out so well."

At 8, Milos began at the Blackmore Tennis Club in Richmond Hill, hitting away using a ball machine with his dad in the wee hours of the morning and late in the evenings when the court fees were cheaper and the club was quiet.

"I grew up loving it; it was just as much a love as it was an obsession," said Raonic, whose family eventually moved to Thornhill, Ont. "It's the only thing I wanted to do."

By the time he was 10, the talented young player was so serious about the sport, it took a total family effort to accommodate his daily tennis routine: 5:30 a.m. wake-up, get to the club by 6:15; train until school started, then get a ride to school; pickup at 1:30 (eat lunch in the car since Milos took class through lunch period); train until 5:30; another pick-up.

His older siblings made as many trips to the club as their parents did. By the time he was a junior travelling to tournaments, his sister pitched in on some of the trips "That was my chance to spend time with him, he's my baby brother," his older sister said. "We're really close."

The Raonics allowed their tennis-crazed teen to enhance his course load and finish high school in three years so he could leave home to train full-time at the National Tennis Centre in Montreal. Fast-tracking involved Milos taking senior-level calculus at age 15. Mrs. Raonic remembers a parent-teacher meeting when the math teacher's jaw dropped on learning that the excelling student wasn't 18 like most of his classmates.

In Montreal, Raonic trained with coaches such as former ATP pro Frederic Niemeyer. There, the young player was billeted with the French-Canadian Chagnon-Lecours family for three years, sharing laughs with them during dinner or while rallying at the ping-pong table, often confiding in them about his tennis aspirations.

"We was shy at first, but we became very close. He was like an older brother to my son, but Milos still called home to his parents every night," Isabelle Lecours said. "Milos loves to be around family, to consult with family. It anchors him."

Raonic needed the ear of family more than ever when U.S. colleges such as the University of Michigan, Princeton and Northwestern offered him tennis scholarships. He chose to sign with the University of Virginia, hoping to study finance. Raonic got just shy of 2000 on his SAT, a number that typically puts a student near the top-10 percentile of scores. But two weeks before school was to start, he had a change of heart.

"He asked us, are you okay if I go to play professional tennis, and we said yes," said Mr. Raonic, who holds a doctorate and works in nuclear engineering. He has always stressed academics while letting the tennis experts guide his son on the sport. "It was very tough. He took almost one week to decide and went pro."

Raonic had determined after conversations with his parents and Tennis Canada that if he could crack the world's top 100, he needed to try. His parents saw the potential, and he promised them he would take university finance courses online.

"Nowadays," said University of Virginia men's tennis coach Brian Boland, who recruited Raonic, "the average age of players on the ATP Tour is 26.2 years old, so in 15 years of recruiting players at the highest level in college tennis, I have only seen two guys turn down scholarships and then succeed quickly on the Tour: Sam Querrey [currently No. 19]and Milos Raonic.

"It's a credit to him and to his parents. He took a big risk and it worked out, and I'm so happy for him. He's the kind of guy that would have made it no matter what route he took. The Raonics are very intelligent people."

Support on the road

It's a rare stop on the ATP Tour when one of the Raonics isn't there, quietly watching the matches and the hours of training, soaking up all there is to learn about the Tour, being there for conversations over dinner or a stroll around the city.

Having finished university in Canada, Raonic's brother works in Montenegro now, as does his sister, who has twin babies, David and Ema. They are close by for a trip when Raonic is playing in Europe.

"My family is willing to do anything for me, so it's very relaxed," said Raonic, laughing that his family members adhere to his superstitions while staying with him at the players' hotel. "They understand how busy I am and they never push for much. It's nice to have someone there, someone you can trust so closely."

In jest, Mr. Raonic calls his son "The Tennis Project" because this journey has been no one-man endeavour. Even when the Raonics are at home in Canada, they say the familiar sound of an incoming Skype call beckons them to their laptop each day for a chat with their son.

But there were more decisions to be made in order to help Raonic get to where he is today. To excel as a pro, Raonic needed bigger challenges than he was getting in Montreal. That was the start of another chapter for the budding tennis star.

First of a three-part series. Monday: The Barcelona experience Raonic retires with back ailment at Estoril Open
April 30, 2018 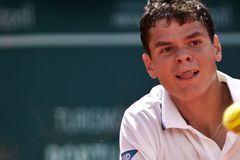 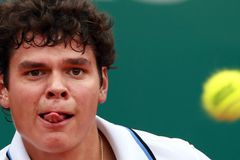 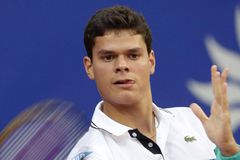 Milos Raonic advances to third round of Barcelona Open
April 29, 2018
Raonic comes home for a rest
May 1, 2018 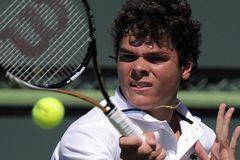