Nestled among lush trees and set off beautiful rust-coloured cobblestone paths in the Barcelona suburb of St. Cugat del Vallès, Milos Raonic refined his tennis game last winter at a small academy in a tranquil setting, the kind place where a player can really work.

Many languages can be heard during a stroll around 4Slam Tennis academy, as a few exceptional teens from different parts of the world work meticulously on their skills. It's simple, but the opportunities have been vast: four clay courts, two hard courts, a clubhouse and a swimming pool with a gym and a modern student residence building a few minutes away by car.

From 17 on, Raonic trained in Montreal at Canada's National Training Centre, but to excel as a pro, he and his parents discussed the next step with Tennis Canada in the fall of 2010. They considered working with former American player Todd Martin or perhaps with Argentine coaches. They ultimately chose to work with former Spanish ATP pro Galo Blanco at the academy he runs with other ex Spanish pros.

The hard-working months in Spain in late 2010 elevated Raonic's game to another level, gave the now 20-year-old rising player new maturity, exposed him to the working habits of Spanish players, and kick-started his remarkable rise up the ATP world rankings.

"Once he met Galo and visited Spain, it was a good fit for him. It felt right away like family, and that's what he likes the most," says his father, Dusan Raonic. "All of these top Spanish players accept him like family."

Raonic settles in on a white leather sofa to do an interview in the private club lounge at the Real Club de Tennis Barcelona during a recent return to the city for a training day ahead of the Barcelona Open. His dark curls are still damp after showering off his morning practice. He's relaxed and conversational, but his day's work is far from over.

He feels at home in Barcelona, he says, listing off the many things he loves to soak in, like Antoni Gaudi's Sagrada Familia and Park Guell, along with the city's frenzied passion for FC Barcelona. He has an afternoon practice ahead and a fitness session too, not unlike the days he spent in Spain in the off-season, training, as his coach has often said, as hard as he's ever seen.

"What I love about it is the atmosphere and how competitive it is," Raonic says. "I don't think in one place you'll find as many top players anywhere . Everybody here wants to be the best. It's a great atmosphere to be in and to improve in."

PUTTING IN THE WORK

Blanco, the gregarious Spaniard, passes through the clay practice courts of the Barcelona Open, rarely passing a person he doesn't know on his way to an open fitness court where many players are working with trainers on a warm afternoon.

Trainer Toni Estalella is taking Raonic through footwork drills, speaking French, sharpening the Canadian's interest in languages. Raonic's size 14 Nikes travel in a flurry, on and off an aerobic step, shuttling around cones, hot-stepping through an agility ladder and racing from one sideline to the other, racquet in hand, as if lunging to make returns.

It's a small example of the kind of total-body physical work done last winter.

"The Milos explosion happened after very hard work," Estalella says, noting that the 6-foot-5, 198-pound Canadian under his tutelage is built a little like basketball player Pau Gasol. "He has improved his mobility a lot and his athletic capacity. We're very happy and proud of his results."

Proud yes, but satisfied, never, Blanco says. When he gets Raonic on court for a practice, he watches carefully to see where his player will go with the ball, even getting down to examine the marks left by the ball on the clay, studying Raonic's improving shot placement.

"When I first met him, he was hitting the ball good, but he didn't know how to play," Blanco says. "Hitting it good is not enough. Now he knows how to play."

Blanco stands off the edge of the clay court, peering through sunglasses, as Raonic plays a shot at the net and struggles to get back in position. His practice partner that day, Argentina's Juan Monaco, lobs it back, high over Raonic's head and beyond his reach. The Canadian loses the point, then swings his racquet in frustration.

"Why do you get upset at this point?" Blanco asks calmly.

"I feel like I've been beat on a lob a thousand times this year," Raonic says, shaking it off and readying to receive the next serve.

Blanco presses Raonic to "play angry," but that is not to be confused with losing composure. The Canadian could be combustible in his junior years, and balancing emotions has been one of their biggest triumphs together.

"The improvement of Milos in Spain has a lot of do with his growing maturity there," says Louis Borfiga, vice-president of high performance athlete development at Tennis Canada, which orchestrated Raonic's move to Spain and is footing the training bill. "Galo has helped him a lot with footwork, with tactics and has improved his game technically."

There were many more improvements made to Raonic's game, even to that thundering serve, the one that has always been his calling card and even impressed hard-serving American Andy Roddick during their February ATP final in Memphis. Putting it out of reach of the best returners in the game and learning the Spanish secrets of the tricky clay surface are still others Blanco would teach.

Second of a three-part series.

Tuesday: Life in the academy 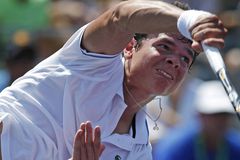