Patrick Chan left the disappointment of the first half of the season in Hawaii, in a much-needed vacation the world figure skating champion called a put-everything-in-perspective kind of trip.

The two-time world champion is gunning for his sixth national senior title at the Canadian championships this week. And fresh from his beach vacation — his feet maybe a little worse for wear — the Toronto skater hopes the rare break will turn out to be the turning point on what's been a less than ideal season.

"Tons of surfing, cut myself here and there on my feet on the corals, but nothing serious," Chan said on his week-and-a-half long break over Christmas and New Years. "I hiked up a volcano, Haleakala, it's like you're on different planet when you're up there.

Chan, who turned 22 on New Years Eve, finished third at the Grand Prix Final last month in Sochi, Russia, and second at Skate Canada International earlier in the season.

Skate Canada marked the first time Chan had lost a major international event in about a year-and-a-half, but it's been a season of changes for the Canadian who has a new coach and new choreographers.

He said his skating is a "little rough around the edges right now."

"It's been tough, it's been hard I think having a bit of a rougher season. . . this is a good test, I'm glad it's happening this season."

Chan's main focus this season is to claim his third consecutive world title, March 10-17 in London, Ont., which would be the perfect launching pad for next season's Sochi Olympic campaign.

Hawaii wasn't the only trip Chan took over the Christmas break. He also toured Ontario with Kurt Browning, Elvis Stojko and Jeff Buttle with "Celebration on Ice," with stops in Stratford, Newmarket, Sudbury and Sault Ste Marie.

He took the opportunity to pick Stojko's brain about preparing for competition.

"I know he was very mentally tough and very consistent despite injuries or despite distractions, and he told me a lot of interesting things," Chan said.

Chan said he's very much a perfectionist, to the point where he treats practice — and even practice sessions at competitions — like competitions themselves.

"So I'll start ripping off a big volume of jumps, a lot of quads, a lot of Axels, even after I do a good one, I don't tend to leave it alone and let my body just rest and move on to something else, I keep grinding at it," Chan said. "And so (Stojko) told me that I need to kind of take a step back and let my body rest because the body knows what to do.

"It's really just about building to the competition, not already doing the best skate of your life just on the practice. . . I really learned a lot of good points from him."

Chan's stiffest competition this week should come from Kevin Reynolds. Three-time Canadian champ Emanuel Sandhu, who hasn't competed since 2007, is attempting a comeback, finishing fifth at a qualifying event to earn his spot in the competition at the Hershey Centre.

World and Olympic champions Tessa Virtue and Scott Moir will be favourites to claim their fifth Canadian title, especially with the absence of three-time runners-up Kaitlyn Weaver and Andrew Poje. Weaver is recovering from ankle surgery.

The women's event should be a two-way battle between defending champ Amelie Lacoste of Delson, Que., and rising star Kaetlyn Osmond of Marystown, N.L., who won October's Skate Canada International in her first-ever Grand Prix appearance.

The Canadian championship is the qualifying event for the world team, and Canada only has one spot in women's singles, based on last year's world results.

Osmond — who's just 17 — opened some eyes with her bronze medal at last year's national championship in Moncton before capturing gold at Skate Canada in Windsor, Ont.

"I know there's a new girl coming up — Kaetlyn Osmond — and I know she's very good," Lacoste said. "It's forced me to reach other goals and be even better. It gives me a new challenge.

"I need to keep the focus on myself. What I do, I don't think about how she's going to skate. I go to nationals and think about myself. Think about what are my goals and focus on my performance.

"There's nothing I can do about her performance — if she skates good or doesn't skate good. It's not in my control."

Meagan Duhamel of Lively, Ont., and Eric Radford of Balmertown, Ont., are the favourites in pairs after two Grand Prix silver medals this season and a fifth-place finish at last year's world championships.

They'll be pushed by Kirsten Moore-Towers of St. Catharines, Ont., and Dylan Moscovitch of Waterloo, Ont., who won the 2011 national title but finished fourth last year.

Brace yourselves for the new Virtue and Moir program
January 11, 2013 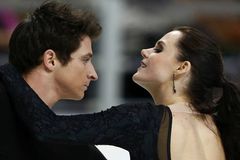