Reigning world figure skating champion Patrick Chan expected the competition to be a little tougher than it was at the Four Continents competition in Colorado Springs, Colo.

The 21-year-old Canadian was facing the mighty Japanese skaters, his toughest opponents in his quest to win a second world championship title next month in Nice, France. But he won the gold medal with ease to extend his stretch of brilliance, defeating rival Daisuke Takahashi of Japan by almost 30 points. Takahashi is a two-time world champion and Olympic bronze medalist.

Chan didn't get off to a strong start, fumbling his way out of a quadruple toe loop during the short program last week, taken aback by how taxed he was, even though he trains normally at high altitude in Colorado Springs. He should have had the fitness advantage over others, but he found he didn't. It rattled him.

He still won the short program over another Japanese skater, Takahito Mura, who landed a quad-triple combination. But Chan found his greatest learning experience was how to put the mistakes behind him.

He was brilliant in the long program, landing two quads and a triple Axel, and won with 273.94 points total, his best for the season in international competition. Takahashi was second with 244.33 after landing a quad jump on two feet and turning a triple Axel into a single.

Chan's long program mark of 185.99 is a season high, eclipsing the 176.52 Evgeni Plushenko put up at the European championships.

"Somehow I didn't feel as in shape as I hoped to be," said Chan, who has won nine of his past 10 events. "But I was able to gather myself for the long and remember what I do well. Going into the long, I was more nervous than I've ever been in a long time. So it was a good test and kept me on my toes. It was a reminder that things aren't always easy and I have to work hard for what I want."

Chan of Toronto said he expects the gap to close at the world championships with Takahashi intent on landing his quad. "There never is a day in competition when I feel I'm entitled to win," Chan said. "I can't do a half-assed program and still win. … Everybody will bring their A game."

Skate Canada had decided to make a decision on the sole women's representative at this event, rather than the national championships because neither woman put up marks good enough for a top-10 world finish at the Canadian championships.

Meryl and White, the reigning world champions, had defeated the Canadian team in their past two meetings. But Virtue of London, Ont., and Moir of nearby Ilderton, coming from behind after the short dance, won the free dance and the overall victory with 182.84 points, 3.44 points ahead of the Americans.

Canadian lugers finally made a breakthrough at the world championship in Altenberg, Germany, on Sunday by winning a bronze medal in the team relay.

While they had won medals in this event at World Cup races, they had never done it at a world championship before.

The team consisted of Alex Gough, who was fourth in the women's event, veteran and fellow Calgarian Sam Edney and the young doubles team of Tristan Walker of Cochrane, Alta., and Justin Snith of Calgary.

"It is a great feeling to finally break the Canadian curse at the world championships in the relay," Edney said.

Canada will stage the world championships next year in Whistler, B.C.

Canadian skaters won a flurry of medals on Sunday at a World Cup meet in Dorcrecht, The Netherlands – four of them silver, the other a bronze.

A men's relay team consisting of Guillaume Bastille of Rivière-du-Loup, Que., Liam McFarlane of Medicine Hat, Alta, Jean and Tremblay were part of the team that finished second to a Dutch team in relay finals Sunday.

On Saturday, Bastille and St-Gelais both won gold in the 1,000 metres.

Canadian freestylers won three medals in Beijing, with Mikael Kingsbury of Deux-Montagnes, Que., winning his seventh World Cup gold of the season in the moguls. Canada almost swept the podium, with Philippe Marquis of Quebec City finishing in a tie for second with a Kazakhstan athlete. Marc-Antoine Gagnon of Terrebone, Que., finished just off the podium in fourth.

"The Canadian guys kicked some butt in China," Marquis said. "I am working harder on my training, trying not to be lazy and trying to have great races, run after run, and I think it's starting to work."

Justine Dufour-Lapointe of Montreal won her sixth silver medal of the season, looming ever closer to Olympic champion Hannah Kearney of the United States who scored her 15th World Cup win.

Olivier Rochon of Gatineau, Que., braved freezing temperatures and won a bronze medal in freestyle aerials in China, with such high winds that many athletes decided, at first, to scale back the difficulties of their tricks. Rochon decided to uncork his difficult quadruple twisting, triple back flip, which prompted the Chinese skiers to change their minds and deliver high difficulty jumps as well. Two of them defeated him.

Rochon still holds the yellow bib as the aerials leader this season.

Nathan Smith, 26, of Calgary, won his first international gold medal at an IBU Cup event at his home training course at Canmore, Alta., on Saturday. He had earlier won a bronze medal at a competition in Austria. Only a handful of Canadians have ever won an international biathlon event. "It is really special to win my first race in Canmore," Smith said. "I have trained here my whole life."

Christine Nesbitt of London, Ont., won a silver medal in a 1,500-metre World Cup race in Hamar, Norway on Saturday, ending just 0.04 seconds away from gold. Ireen Wust of The Netherlands won in 1:56.99, while Nesbitt finished in 1:57.03. 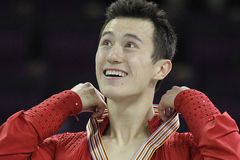 Thomsen makes a skiing statement to his doubters
May 8, 2018 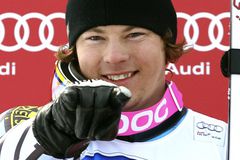