In early March last year, at a sale of two-year-old thoroughbreds in Florida, there were eight colts sired by Uncle Mo, a former juvenile champion.

One of the colts was considered particularly promising and sold for $600,000. But it was a different Uncle Mo colt that caught the eye of two men from Reddam Racing, the team that had won the Kentucky Derby and Preakness in 2012 with I'll Have Another. Surprised that both his guys at the sale were in agreement on a horse, and intrigued by the interest in the seemingly lesser horse, owner Paul Reddam put up $400,000 to buy the bay colt.

Reddam first saw the horse he named Nyquist up close three months later at Santa Anita Park near Los Angeles. It was the horse's first race, and he'd be ridden by jockey Mario Gutierrez. Coming around the final turn, Nyquist briefly fell behind, by a fraction, and then galloped to a narrow victory.

"Nyquist battled back," Reddam said in an interview Tuesday. "When he crossed the wire, I said to myself, well, this horse is really something special. You don't see horses do that, battle back like that."

It was the first of eight consecutive victories, the most recent coming last Saturday when Nyquist won the Kentucky Derby. Nyquist now has a strong shot at horse racing's biggest prize, the Triple Crown, one year after American Pharoah ended the decades-long Triple Crown drought. Nyquist is the odds-on favourite at the Preakness, which runs May 21. The Belmont Stakes follows June 11.

With Nyquist, Reddam has had a star from the start – and presents the chance to settle unfinished business. Four years ago, I'll Have Another was a long-shot at the Kentucky Derby and Gutierrez was an unknown jockey. The horse and rider, backed by trainer Doug O'Neill and the Windsor, Ont.-raised Reddam, won in Kentucky and then won the Preakness, too. But I'll Have Another was scratched from the Belmont because of injury a day before the race, ending the Triple Crown pursuit.

O'Neill and Gutierrez have for months believed Nyquist has the potential to equal American Pharoah. But Nyquist, even as the Derby favourite, had detractors who questioned his endurance. Nyquist, ridden well by Gutierrez, silenced those doubters. Reddam hesitated to look too far ahead, but felt Nyquist has what it takes to go the Triple Crown distance.

"Nyquist has – it's somewhat of an intangible – class," Reddam said. "That's what makes him so dominant. He has a certain class to him. That class will come out, if he stays physically healthy, in the Belmont."

Reddam, 60, began to fall in love with horse racing in high school in Windsor. His first taste of ownership came in Toronto, where he was a graduate student in philosophy at the University of Toronto and parlayed some scholarship money into a stake in a horse. He later completed his PhD at the University of Southern California in 1982. He became a professor and a regular bettor at the track.

In 1985, he was mired in a 22-day losing streak betting on harness racing at Los Alamitos near L.A., when he took a job offered by his dad, who worked in the mortgage business. Reddam was a natural – the business made him wealthy and allowed him to keep a hand in racing.

Reddam's first Derby horse was Ten Most Wanted, one of the favourites in 2003; Reddam was a co-owner. The trainer believed the horse would win, but Ten Most Wanted was bumped twice out of the gate and finished ninth. "I was so deflated for days," Reddam said. "I made a mental adjustment about being optimistic and not overconfident."

In 2012, while I'll Have Another and Gutierrez were in the spotlight, Reddam's business, CashCall Inc., was attracting negative attention. CashCall is a high-interest-rate lender and mortgage company, and it was being investigated in three U.S. states for alleged violations of consumer-protection laws. In 2013, it was sued by the U.S. Consumer Financial Protection Bureau, accused of charging too much in interest, sometimes more than 300 per cent. More recently, CashCall has paid millions to settle several suits, including in Michigan and California.

"I believed what we were doing was absolutely legal," Reddam said. "We're bumping along. We've had some wins and some losses. It's a long-term battle."

The track has been a respite from struggles in business. Reddam was the No. 5-ranked owner in the United States – out of almost 16,000 – in 2015, according to Equibase, a horse-racing website. This year, he is No. 1.

Nyquist is unlike any horse he's had before. Thinking of the prominent skeptics before the Kentucky Derby, Reddam offered a bit of philosophy.

"It's a testament to the following, that sometimes things are so obvious that people just refuse to see them," said Reddam. "The obvious thing was to bet this horse to win." 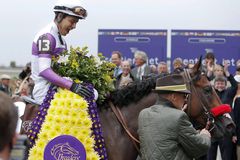