The biggest purse in show jumping, a cool $1-million, went to Philipp Weishaupt on Sunday, a German riding LB Convall, who won the CP International at the Spruce Meadows Masters by the narrowest of margins over Portugal's Luciana Diniz.

The victory capped a remarkable turnaround summer for Weishaupt, who arrived here in June to ride in the National, only to have an emergency appendectomy that prevented him from competing. Doctors advised Weishaupt to take six weeks off to recover. Instead, he took a six-day break and resumed riding. In the end, the payoff – and the payday – were both worth it, he said.

"I feel now – without the appendix – much lighter," Weishaupt joked. "Since that day, I'm actually on a good road. I had, for a couple of weeks, a few issues. It was painful. I probably started riding too early. But now it's totally fine. The hospital did a great job on me."

Weishaupt was the only rider in the star-studded field of 40 to go double-clear.

But it was oh-so-close at the end. The margin of victory was the single rail that Diniz, riding Fit For Fun 13, took down on her final fence of the second round.

Thanks to having the best time in the first round, Diniz was the last of the 12 riders competing in the second round to enter the ring. She was clear all the way and had the best time until that last slight mishap.

The crowd of more than 87,000 let out a collective gasp when that last rail came down. Diniz, competing at Spruce Meadows for the first time in her career, had to settle for the second-place money of $600,000.

Course designer Leopoldo Palacios of Venezuela set an extremely challenging course for the first round, which produced only seven clear rides. Most of the damage came on the final combination, which took out one top rider after another.

Palacios's victims included the two-time defending champion Scott Brash of Britain, who was clear until the final seconds, but took down one rail and didn't qualify for the second round because of time.

The same combination also eliminated the world's No. 1 rider, Kent Farrington of the United States on Voyeur, Lorenzo De Luca of Italy on Limestone Grey, plus Gregory Wathelet of Belgium on Eldorado Van Het Vijverhof, who earlier this year won at Aachen, the first event in the Rolex Grand Slam of Show Jumping.

The top Canadian on Sunday was Eric Lamaze on Fine Lady 5, who finished fifth. Lamaze was the only other rider aside from Weishaupt to complete the second round without taking down a fence. But Lamaze carried four jumping faults out of the opening round, and also incurred a time fault in Round 2, for exceeding the time limit of 66 seconds by 0.35 of a second. Lamaze settled for a $180,000 payday.

Weishaupt acknowledged that what looked like a little bit of bad luck – his horse threw a shoe in the warm-up ring before Round 2 – may have actually aided in his victory. Weishaupt was originally scheduled to ride eighth in the second round, just ahead of American rider McLain Ward.

Instead, he was pushed back four places in the order while LB Convall was being reshod. That, according to Weishaupt, permitted him to scout Ward's ride and made him rethink his own strategy, a move that ultimately paid off in the victory.

"I mean, you can be in form all you want, but in the end, it has to be your day," Weishaupt said. "Today, if I go in my order, I would be before McLain and I would do one less [stride] before the combination and probably the same thing would have happened to me as what happened to McLain's horse [which took down a rail].

"So you can be as prepared as you want, but you have to be lucky."

Weishaupt said his horse handled the challenging combinations "pretty much as you would a gymnastic line.

"He has just so much talent. He has a bit of character sometimes and needs to know that I'm the boss – because sometimes, he likes to take over. But once he's fighting for you, he goes through the fire. He's really amazing – such a good horse."

One day earlier, the United States won the BMO Nations Cup, ahead of Brazil and Germany. Canada finished fourth in the event.

As for Sunday's lucrative victory, Weishaupt acknowledged that the prize money will come in handy, but cautioned: "Basically it only feeds our stable for one-and-a-half months. We have a big operation. It's great. The prize money is great, but the sport is also very expensive. Put it this way: I'm not planning to spend the next six weeks [celebrating] in Hawaii." Show jumper Mario Deslauriers finds himself back in the saddle at Spruce Meadows
September 5, 2017 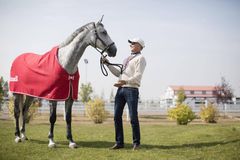 Underdogs rule the first week of the show-jumping season at RBC Grand Prix
June 11, 2017
Follow Eric Duhatschek on Twitter @eduhatschek
Report an error Editorial code of conduct
Due to technical reasons, we have temporarily removed commenting from our articles. We hope to have this fixed soon. Thank you for your patience. If you are looking to give feedback on our new site, please send it along to feedback@globeandmail.com. If you want to write a letter to the editor, please forward to letters@globeandmail.com.
Comments