As Milos Raonic moves up the tennis rankings, there may be more career-defining moments like the one last summer – July 30, at the London Olympics, playing Frenchman Jo-Wilfried Tsonga in the round of 32.

It was an epic encounter: Raonic losing the first set, winning the second, and then the two ground it out, game after game, stroke after stroke, until Tsonga prevailed 25-23 in the third. It was a difficult loss to stomach in an event the Canadian wanted badly to do well in and now, some eight months later, Raonic gets a chance for the rematch.

He come-from-behind victory over the 12th-seeded Cilic means Raonic (No. 17) gets Tsonga on Wednesday, with the winner likely to face top-seeded Novak Djokovic in the quarter-finals.

A quirky bit of scheduling – a first-round bye, followed by a second-round walkover against injured Frenchman Michaël Llodra – meant Raonic was the final player to get started in singles. The Canadian's sluggishness showed early – he lost the opening set 6-3 and was missing frequently on his forehand.

But gradually, he turned the momentum around. Raonic broke Cilic in consecutive service games – the first time, right at the end of the second set to square the match, and then, with Cilic's confidence faltering, again on Cilic's first service game of the third set.

At first blush, Raonic and Cilic look like mirror images – two tall, rangy players smoothing out the rough edges of their respective games. Raonic, however, has a touch more power and it showed at key moments in the match. The improvement in his service game was particularly noticeable after Raonic began the third set with an easy hold.

From there, he smoked three brilliant returns on Cilic's serve, including a forehand he blasted through the court at 30-30 to set up the only break point he'd need. With that under his belt, Raonic served the match out with comparative ease and punctuated the win with a 139-miles-an-hour ace down the middle.

Raonic said the conditions at Indian Wells suit him particularly well, noting how "the ball bounces pretty high, so it allows me to get on top of the ball, and especially with my serve to be able to change it around more with different spins.

"I don't know about [Tsonga], but I know I'm definitely a lot more comfortable on hard courts. He's playing well. He's been playing well consistently since the start of this year," Raonic said. "I've just got to get out there and focus. We're both going to be trying to get ahead in the points early. He's very athletic. I just have to go out there and try to get ahead and play as much as I can on my terms."

Raonic has won at least one match in each of his three previous years at Indian Wells, and won the ATP event in San Jose the past three years. California seems to treat him right and Tuesday, the comparatively smallish Court 3 was packed with pro-Canadian fans, making him the clear crowd favourite.

"It makes a lot of tournaments that are far from home a little bit more homey," Raonic said.

Raonic has a thoroughly respectable 9-15 career record against top-10 players and was 6-6 against them last year. Tsonga has an 11-3 match record this year, and both he and Raonic lost to Roger Federer in January at the Australian Open.

"I'm going to have to serve well, take care of my serve like I was able to today, especially after the first game of the second set, and try to get ahead on his second serve points," Raonic said. "When he's making his first serves he serves really well, and it's tough. But when I get a chance, just to be aggressive and try to get ahead in the points as early as I can."

Raonic on a roll thanks to improved return game
February 19, 2013 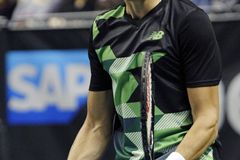 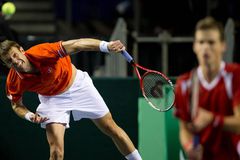