Seminal moments in sports history tend to be more appreciated after the fact rather than in the moment – which is where both Milos Raonic and Vasek Pospisil plan to stay when they play each other Saturday, in the semi-final of the Rogers Cup.

It means a Canadian will play in the final of the de facto national championship for the first time since 1958, when Robert Bédard prevailed in a match over American Whitney Reed. It isn't Fred Perry territory (see Wimbledon, 1936), but it's getting close.

So a breakthrough will be made this weekend, but don't tell that to either player. At this stage of the tournament, the stakes are so high that Raonic and Pospisil were mostly concerned about what happens Saturday – how to prepare and how not to let their personal relationship interfere with a match that could greatly change the direction of their respective seasons.

"It's great, what it represents for tennis in Canada," Raonic said. "It's great what it shows to little kids: that you can succeed as a Canadian in tennis. But for what I want to achieve, and what I've got to do to prepare myself as best as possible for tomorrow, it doesn't change anything."

Raonic, of Thornhill, Ont., is closing in on his goal of cracking the top 10, while the Vernon, B.C.-born Pospisil will move into the top 50 as a result of their performances this week. The last time the two played in a professional singles match was in July of 2010, when they met in the round of 32 at a Challenger tournament. Pospisil was ranked No.311 in the world then; Raonic was No. 267. Raonic won, in straight sets, ending a three-match losing skid to his junior rival.

In the ensuing three years, much has changed in both their lives. The two Canadians, currently ranked 13th and 71st in the world, respectively, won their matches in widely disparate manners Friday.

Pospisil was leading his match 3-0, when Russia's Nikolay Davydenko inexplicably retired because of bronchitis.

Raonic won a tight 7-6 (2), 4-6, 6-4 victory over Ernests Gulbis of Latvia in a match that went down to the wire. Raonic made 50 unforced errors, many of them trying to put the pressure on the shot-making Latvian. Raonic ventured into the net 27 times in all, and won just 12 of those points.

The 24-year-old Gulbis is known for his capacity to melt down at inopportune times. But even after losing serve in the fourth game on the final set on four double faults, Gulbis broke right back, pushing the third set to the limit. Raonic finally prevailed in the 10th game when, at 4-5 and deuce, he forced Gulbis into an uncharacteristic forehand error. At match point, Gulbis hit a backhand into the net, bringing the capacity crowd to its feet.

Gulbis had been sparring with the fans throughout the match and had a few choice words for them – and for the state of Canadian tennis – afterward.

First, he dismissed the booing as no big deal: "They're used to hockey here. It's okay."

"That's why all the Canadian players, they play always very well in Canada. Honestly, some of them – I guess you know who – they don't play really nowhere else. Milos is a great player. But the rest of the guys, they play great in Canada because it's like Davis Cup every match. People are clapping after a double-fault, before a second serve to provoke a double-fault. I don't think it's nice."

Pospisil will get a chance to show he can play well elsewhere, thanks to his performance this week, which earned him a special exemption into next week's ATP Masters 1000 tournament in Cincinnati.

When Pospisil was asked who should be favoured on Friday, he answered: "Well, you got to give the edge to Milos, for sure. I mean, I have the edge in terms of head-to-head, but things have changed in the last two years. He's improved a lot. So he would, obviously, be the favourite, no doubt about that. My run here doesn't change anything here in terms of that."

The last Canadian to get this far in the tournament was Mike Belkin in 1969.

Four years ago, in Toronto, Raonic and Pospisil played doubles together and knocked off the team of Rafael Nadal and Novak Djokovic in a first-round match.

"I had no idea how much I made until somebody told me in the TV booth," he said. "I was like, 'Oh, really? Wow!' The money's nice, but it's not about that. I set goals for myself. I'm thinking bigger picture."

One of those goals, he'll meet early next week.

"For me, top 50 was a lifelong goal and dream," Pospisil said. "It was the goal that I set at the beginning of this year, my perfect scenario if I ended the year top 50. Here I am there already. So my goals are already changing. Every night I go to bed, I'm thinking, 'I want to do better and better.' "For sure, it's great. I'll try to reset my goals a little bit and try to keep moving up." 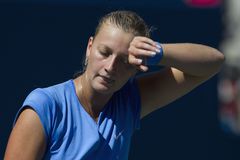 Advantage, Allaster: How this Canadian rose to the top
August 9, 2013 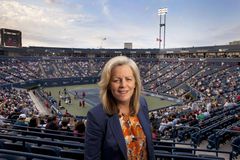 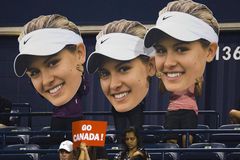 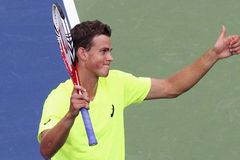 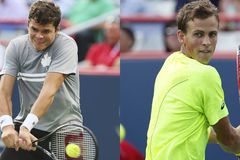 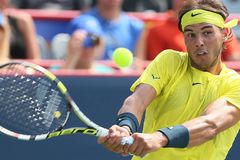 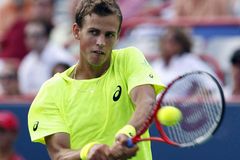