A little more than a month ago, Ray Zahab set out on an incredible journey. The 44-year-old athlete from Chelsea, Que., aimed to run across the inhospitable Gobi desert, the hardest physical feat he had attempted, he said, since he ran across the Sahara. Now, he's back, and he tells The Globe and Mail's Sean Silcoff how it went.

You have just completed an incredible expedition. How do you feel?

I feel extremely tired, but fantastic. In the over 2,000 kilometres I ran, I ironically got no blisters, even though the entire journey was pretty much off road. Less than 7 km was run on pavement. We set out with a goal of creating this huge archive of film footage and photos of people of Mongolia and culture for students to access, and we are coming home with so much more. Our photographer took 40,000 photos.

What kind of toll did the expedition take on your body?

This expedition was very difficult for me physically because of the unpredictables. I expected to be able to run 70-plus km every day. In fact, most days were around 60 km, some days at 70 km and some less. There were many reasons, but weather was the biggest hurdle. I certainly did not expect to be running in driving rain and winds for several days. Injuries such as strained quad and back slowed me, but we also were gathering so much footage that took tremendous amounts of time and energy. I guess you could say I am happily exhausted.

What were some of the more extreme challenges you faced, in terms of weather and terrain? How did this affect your running?

See above, but also: My Mongolian team were absolute route geniuses. They not only knew many of the areas I was in, but we would connect with locals and learn short cuts [through dunes or a mountain pass] that would save several kilometres. These came at a price, because instead of running on established trail/track I would be many times off trail in very rocky or rough conditions. I think that's how I first injured my quad early on. Leaning into the driving wind for days on end is what messed up my back.

You have run across the Sahara, Atacama, Antarctica and Amazon. How does this expedition rank in terms of difficulty?

This was very long. The next longest since the Sahara, but I would have to say the 4 1/2 toughest days I ever spent on expedition were when I ran the length of Death Valley National Park [in California and Nevada] completely off-road in August of 2011. But this was still really tough. They all are.

During your run across the Sahara you went through 25 pairs of shoes. This time you packed 15. How many did you use?

Ended up at last minute leaving behind seven pair to lighten my bags for flights, but used four pairs of the remaining eight.

You planned this expedition for a year, and knew challenges lay ahead, both foreseen and unforeseen. One of the latter was your running partner, Kevin Lin, dropping out early in the expedition. Tell me about this and other unforeseen challenges and how they affected the expedition.

Kevin's departure was really difficult because we are such close buddies, but he was injured early on and missed over 300 km of running. His team from Taiwan felt, logistically, he should go back and complete those missed kilometres, then go about a route that would best suit Kevin and the team logistically. I had always set our route to go through Dalanzadgad [Mongolia] and beyond, and with our logistics in motion I understood completely their decision. But of course that changes our day-to-day operations. Now, I would be carrying hydration, tracker, [communication] devices, all of the stuff we would initially split up. Now that I was running alone we shortened resupplies to anywhere between 10 km to 25 km, but pretty much everything else stayed the same.

You originally planned to start at the eastern edge of the desert in Mongolia and cut down into the Chinese portion. Instead, you stayed in Mongolia the whole way. Why did you change course and how did it affect the expedition?

We always new we would start at the far north eastern edge of Mongolia and head to Dalanzadgad, and then at that point [roughly 1,500 km] we would either head south to China, or west into western Gobi. We wanted to visit China but knew that crossing the border at our chosen point is very hard to access, but thought we would try. We got the permissions on the Mongolian side to exit, but in the end couldn't obtain Chinese permission. I also didn't want to risk driving around to another crossing in hopes of meeting my last point of running – in case there would be a kilometre or two that would be missed. Also, in initial preparations we didn't choose western Gobi because of its remoteness and resupply difficulties, but in the end I am so glad things worked out they way they did. Our expedition was pretty much same distance – we saved tremendous kilometres in expedition because of local navigation tips – but we also got to see/film/photograph and extraordinary part of the Gobi … and our finish spot at an oasis was epic.

What was the high point of the expedition? The low point? The most pleasant surprise?

High points: So many … but here are a few: Meeting a 10-year-old girl at a Naadam festival who just won a gruelling cross-country horse race … she was the jockey. Also, when my wife, Kathy, came to join me – it took her five days of non-stop travel – after my back injury and walk/run the last 200 km at a turtle's pace. … Low point: Kevin leaving, I was really bummed. Sharing the experience and running together fuels me.

Your wife joined you for the last leg of your expedition. That wasn't part of the original plan. Why the change?

See above. She has never been on one of my expeditions, but having her there for those last 200 agonizing kilometres was great inspiration.

What is your next challenge?

Stay tuned. But for our youth team at impossible2Possible [a non-profit organization founded by Zahab in 2008], this November, a group … will run and learn about biodiversity with an educational team as they cross from Peruvian Andes to Peruvian Amazon. There is no cost whatsoever for the program, and schools are free to join as well.

Canadian runner embarks on a daring adventure of mind, body and spirit
June 21, 2013 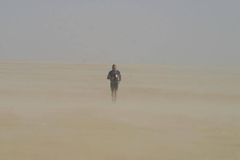 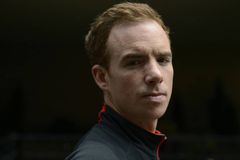 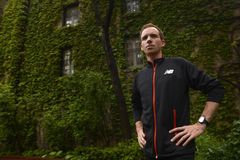