The depression was toughest for Rebecca Marino when she was alone. A deep sadness would often keep her from getting out of bed or cause her to cry for no reason. Sometimes she would even find herself thinking about suicide.

The Vancouver native had been one of Canada's most promising female tennis stars, a six-foot talent who clocked one of the fastest serves on the WTA Tour and had loads of potential. Her rise was fast; she ranked as high as No. 38 in the world by the summer of 2011, when she was just 20. She stepped away from the sport this week at 22, saying she has lost the desire for it.

The week has been a whirlwind for Marino, as she spoke publicly for the first time about the depression that she had kept private. Few outside her family, coaches and close friends knew about the overpowering sense of grey that she has experienced for six years. She hadn't even told the Canadian teammates with whom she trained in Montreal. Now Marino is putting it all out there, hoping to empower others.

"The impact would be most difficult when I was alone with my thoughts," Marino said this week. "On the court, it didn't distract me much, but I couldn't enjoy the victories as much as I used to, and the losses stung so much more. Over time, my passion for tennis has slowly diminished. In this last while, I have finally been honest with myself that me as a person is more important than my tennis career."

The likeable, kind and quiet young player had confided in coaches long ago about her personal struggle, but asked them not to tell anyone. They helped her arrange therapy.

"I had been thinking to myself, 'Am I making this up or maybe being overly dramatic?'" Marino said. "When I started talking to a psychiatrist, he said, 'You have clinical depression,' and it was like, 'Okay, so I wasn't making this up and I'm not the only one who has this.' It took a long time for me to tell others. I didn't want to scare people away or make them worry about me."

She had a lot of emotional ups and downs, which on the surface might not have seemed unusual for a young player fighting up the ladder in the ultracompetitive and often isolating world of pro tennis. But she was learning to be honest with her coaches on the days when the pain of depression was wearing her down.

"Athletes today are coached to keep going 110 per cent, go harder, dig deeper, get faster and better," Marino's physical trainer, Lisa Northrup, said. "It's a very tough environment to say, 'Not today, something is wrong here.' It took courage for her to be honest about it and put the person before the athlete."

She had also been spending lots of time interacting on Twitter and Facebook, talking about things like music or her favourite NHL team, the Vancouver Canucks. The coaches warned her that fans can be critical online. But they also thought the shy girl might benefit from a chance to open up and express herself online.

"It was our mission to make her better at tennis, but we started to realize she wasn't being fulfilled as a person," Sylvain Bruneau, women's high-performance coach for Tennis Canada, said. "There were many moments I felt she was very lonely and sad, retreating inside herself. I think she initially loved it in Montreal and saw quick benefits from training there, but as time went by and she was on the road 25 weeks a year, the rest of the time in Montreal training instead of being at home in Vancouver, it was my sense that it was becoming very heavy on her shoulders."

Marino surprised many when she quietly announced she was taking a break from the game in 2012, citing mental and physical fatigue. She said she would be back.

During her seven-month hiatus from pro tennis, she rested and savoured simple things that others her age do all the time, things she had denied herself because she was always travelling or on a strict training regimen. She would go for leisurely coffee with friends or out at night. The athlete who had excelled at everything from swimming to basketball finally got to try snowboarding for the first time. And she played a little tennis with friends just for fun, which was novel and liberating.

It was enough to revive some fire for the game – if even briefly – and she made a short comeback in September of 2012, winning an International Tennis Federation event. On WTA Tour, it was tough to prioritize the treatment for her depression. She had a therapist in Vancouver whom she could consult by phone, or one employed by the WTA whom she could visit at tournaments. This week, she stepped away from tennis again, and from social media too, because the negative comments had become too distracting. She also revealed her depression.

"Finally speaking about it is very empowering and I hope to make a difference to other people's lives," Marino said. "I've had suicidal thoughts, and if I can be open to admit that and share my symptoms, I hope others can recognize them and seek help too."

Bruneau is surprised to see the shy player reveal such personal details, saying it would have been easy for Marino to quietly retire without saying much. But he's proud to see her starting a public dialogue about depression.

She wants to return to school, possibly to study business. She hopes to campaign for depression awareness and to meet other athletes who have suffered with it, like Olympian Clara Hughes. Michael Landsberg, the TSN broadcaster who often speaks about his own dark experiences with depression, has reached out to Marino.

"It's so good to speak to him, someone who understands exactly what I've been going through," Marino said. "For a long time, I didn't know anyone personally who suffered with depression, so it was very scary for me."

She admits she sometimes thinks about the tennis scholarships she once turned down from several U.S. colleges, including Georgia Tech, with which she had signed. But she changed her mind and opted to pursue pro tennis instead, a decision she says she does not regret.

Now at home in Vancouver with her parents, she says it will be easier to maintain regular face-to-face therapy sessions. She says she's on medication to regulate her moods.

"I have stepped away because I just don't have the passion for tennis any more, and I'm being honest with myself," Marino said. "Who knows how long it will be before I find something new to be passionate about. That just means I can try lots of new things until I find it, and that is really exciting to me." 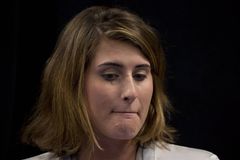