Ed Whitlock was at home Monday feeling a bit worse for wear a day after he ran the Scotiabank Toronto Waterfront Marathon. As he described it, his body was in post-race protest: hamstrings howling, legs carping, knees grumbling.

"After I finished and later in the day on Sunday I was okay, but I am not feeling too good today," Ed says. "I am stiff, and not moving too well. I have so many aches and pains, I have kind of lost track where."

The phone in his home in Milton, about a half-hour southwest of Toronto, hadn't stopped ringing. First, CNN requested an interview. Then, he happily gabbed with a journalist from The Times of London.

"There are an awful lot of people in this world, but there are not many idiots of 85 running a marathon," he says good-naturedly.

Ed does more than run marathons, he chews them up, spits them out and annihilates them. A fleet octogenarian, he sets records just about every time he laces up his ancient Brooks running shoes. He has four identical pairs, but only one he wears while racing. They are just too comfy to replace, even if, like him, they are getting on in years.

"My memory is going, even if my legs aren't," he says. "I would think I have had them at least 20 years, but I can't say for sure. They are certainly well past their due date, that's for sure."

A former engineer who worked in the mining industry, Ed Whitlock retired in 1989. He was the oldest by six years among 4,833 participants in Sunday's marathon, and he set a world record in the 85-to-89-year-old group by finishing in three hours, 56 minutes and 33 seconds. He broke the existing mark by nearly 40 minutes, even though it was his first marathon in three years.

He says he would have run another before now, but niggling injuries prevented it.

"This one even was in doubt until a couple of weeks ago," Ed says. "The training I did was less than ideal. I am sure I could have finished a lot faster if I had been better prepared."

He complains that he ran too quickly at the start, and that took its toll on him by the time he was a little past the halfway mark.

"I was having serious doubts about the situation," he says. "I was very despondent. I thought the finish was going to be very ugly, if I got to it. Fortunately, things didn't go downhill as much as I anticipated."

A bare wisp at 5-foot-7 (170 cm) and 101 pounds (46 kilos), Whitlock caught his umpteenth wind and crossed the finish line looking fresh as a daisy. After wrapping himself in a heat blanket, he trundled off to a news conference and tossed one-liners about like Marcus Stroman fastballs.

It is hard to keep track of the records Ed sets, but he owns about three dozen now, including age-group records at distances ranging from 1,500- to 10,000-metres, as well as marathons. He has set six at the Scotiabank Toronto Waterfront Marathon, including marks in the 75-to-79 and 80-to-85 divisions.

In 2003, at age 72, Whitlock completed a marathon in 2 hours, 59 minutes, and 10 seconds; he remains the oldest man to run a marathon in under three hours.

A runner in his youth, he gave it up about the time he emigrated from England to Canada. He was in his early 20s then, but he didn't run again until he was 41, when his wife, Brenda, suggested it to get him out of the house.

He first dropped in on a local club with the notion that he might offer to be a volunteer coach. When nobody was interested, he did what came naturally and began making laps around the track.

"It was really before the time that the jogging craze started, and teenagers there watching told me they had never seen anybody so old run," he says.

About 15 years ago, he nearly quit again. His knees were giving him trouble, so he went to a joint specialist. After examining him and doing an MRI, the doctor suggested he had run his last race.

"Being the contrary person that I am, as soon as I heard that, my knees felt remarkably better immediately," Ed says.

Unlike many elite masters runners, he doesn't have an elaborate training regimen and isn't terribly particular about what he eats. He runs nearly every day, doing loops around a cemetery 100 metres from his house.

"I doubt that I would run for my health," Ed says. "The incentive to me is to race. I suppose, to an extent, it's an ego trip to set world records. That's an incentive to me."

He is not sure how much longer he will do it. Age is creeping up on him.

He was taking a day off from training on Monday. His body was in full protest, and in the last 24 hours, he had lost six pounds. Well, he conceded, maybe he will stretch his tired legs by taking a little walk.

"There are not many idiots who are doing this at 85," he says again, chuckling.

There is a fellow in Toronto, a sprinter and middle-distance runner named Earl Fee, who is 87.

"He just took up high-jumping," Ed says. "You won't catch me doing that."

At 85, Ed Whitlock sets another world record at Toronto marathon
October 16, 2016
Older athletes offer a master class on aging
May 1, 2016 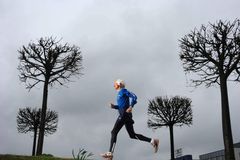 Robert MacDonald runs so that others will be able to walk
October 14, 2016
Follow us on Twitter @globesports Opens in a new window
Report an error Editorial code of conduct
Due to technical reasons, we have temporarily removed commenting from our articles. We hope to have this fixed soon. Thank you for your patience. If you are looking to give feedback on our new site, please send it along to feedback@globeandmail.com. If you want to write a letter to the editor, please forward to letters@globeandmail.com.
Comments