These days, Rory Bushfield takes comfort in the companionship of his dog Dexter back home in Squamish, B.C.

Often travelling the world doing stunts for ski films, and married to a legendary halfpipe skier, he never thought the thrill-seeking couple had time to care for a dog. He smiles when recalling how the warm-hearted Sarah Burke waited until her husband was foggy after a mountain-biking fall and persuaded him they should take in the stray pup.

It has been a tough eight months since Bushfield lost his wife. Burke died from injuries suffered in a training accident at 29, just two years from representing Canada in the Olympics after her relentless campaigning helped put women's ski halfpipe and slopestyle into the 2014 Sochi Games. As Bushfield lives in the home they shared, he's thankful for the dog Burke adored. Dexter is like so many things that comfort the quietly romantic Bushfield as he grieves the love of his life.

"Sarah was the most amazing girl ever, I put her on pedestal absolutely," the smiling, soft-spoken Bushfield said. "I had it all."

Burke will be inducted into the Canadian Olympic Hall of Fame in Toronto on Friday in the builders' category, and Bushfield will accept on her behalf. He appeared at a news conference with the other inductees on Thursday, sharing warm embraces with his mother-in-law and wearing a tiny purple ribbon and a button with Burke's photo, the likeable blond star with a magazine-perfect smile.

The two met as young teens at a summer camp, and over the years they became pro skiers and shared a love for living on the edge, the outdoors celebrated in their romantic and rustic outdoor wedding in 2010. They loved skiing, surfing, mountain climbing, snowmobiling, travelling. Bushfield still travels the world doing various tricks and stunts for films.

"I'm still flying planes, skiing, travelling, just saying yes," said Bushfield, who said he doesn't hesitate to continue a career full of high risks. "I try to just do what Sarah did. She was everywhere, doing the craziest trips ever.

"Sarah passed away doing what she loved to do, and to be honest, that's what I want to do. To give it your all and live completely in the moment. It absolutely crosses my mind that it's dangerous, but every risk is weighed, and it's always worth it. For sure, it gets harder to take the risks. But when you're on the edge, you don't think about the edge. You're taking risks that are controlled."

Bushfield says he also does some of their old pastimes alone or with Dexter.

"You just carry on, because that's what Sarah would want," Bushfield said. "I turn the tables and think about what I would want her to do, and I do that. I'm still very torn up. It took a while to do anything. I constantly do the amazing fun things that Sarah has given me the opportunity to do."

Burke had competed against men in big air competitions when there was no category for women, and led the charge to get women's halfpipe into the X-Games, where she won four gold medals. Her bold tricks became the stuff of ski films, while her business savvy, ski knowledge and good looks earned her modelling shoots and sponsorships. She helped young skiers and raised the sport's profile.

"I was lucky enough to see her lobby, do competitions that nobody else would do just because if she skied there, she would up the level of the competition and validate it," Bushfield said. "She would basically do it to get it into the Olympics. They would have been otherwise useless to her, but they helped to make the Olympic push. It wasn't for money, it was fully for the Olympics."

"It was the perfect storybook love story, the kind of thing everyone noticed and admired," said Paynter by phone, also Bushfield's best man at their wedding. "It's difficult to see Rory go through this, but he has a really good sense of what Sarah would have wanted, and he's extremely driven to live as she would have wanted."

Bushfield keeps tabs on Burke's teammates training in Squamish and plans to go to Sochi, likely with Burke's parents, with whom he remains close. He is starting a foundation for her and speaks to carry on her legacy.

"Sometimes it's difficult [to reminisce], but when you're called on and it's for Sarah, then no, it's not difficult," Bushfield said. "Sometimes I'll watch a memorial video, and it's sad, but I'm also so proud of Sarah and everything she did." 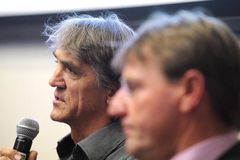