It's not all that often a curler has a fearsome reputation, not in what's considered such a friendly, polite and decidedly Canadian sport.

But Rachel Homan – the ultra-intense Ontario skip who has been barking calls, making shots and intimidating opponents at the Scotties Tournament of Hearts all week – is known for frightening even a few of her peers from time to time.

"So many people, like my boyfriend's friends, think she's the scariest person they've ever seen when they watch," said Emma Miskew, Homan's long-time third and close friend. "I'm always like 'Really? But she's so nice.' "

No, she's scary all right.

The 23-year-old personal trainer from Ottawa defeated Manitoba's Jennifer Jones 9-6 on Sunday night, winning her first senior national title in only her second appearance by knocking off a legend in dramatic fashion.

Homan rang up leads of 3-0, 7-4 and 9-4 on the basis of nearly perfect shot making with her skip stones, leaving Jones – a four-time winner who has finished in the top three in an incredible nine consecutive Scotties – playing catch up again and again.

"I can't even comprehend what happened just now," Homan said, struggling to speak after the game as she was overwhelmed with emotion while remembering her late grandfather, Gerry, a life-long curler who died of cancer in 2011. "It's unbelievable. I can't believe we're going to worlds.

"My grandfather passed away after our first Scotties, and I wish he could be here. I mean, I know he was with us here tonight. And I'm so happy everyone else could be here to share this with us."

Ontario had capitalized on a rare mistake by Jones right in the very first end, as when the Manitoba skip missed a freeze with her final stone, it left Homan with an easy draw for three points.

Despite that early deficit, Jones managed to make things interesting. Manitoba scored singles in the second and fourth ends to get to 3-2 and appeared to catch a break in the fifth when Ontario lead Lisa Weagle burned her team's third-last stone while sweeping.

But Homan, facing a house full of Manitoba rocks, calmly drew to get a piece of the button and rescue the end.

"Rachel made a brilliant draw," Ontario coach Earle Morris said. "Once that was over, the timing was perfect, because we could sit down and chat and put it behind us."

"My team members were really, really good about it," Weagle said. "Especially Rachel… I was devastated, but you have to move on."

The single point meant Jones regained the hammer for the sixth, and Manitoba scored a pair to knot the score at 4-4 to set up what appeared like it would be a prolonged battle to the end like their two previous meetings.

Instead, the game's turning point came in the seventh. After Homan pulled off a remarkable double takeout on her first shot to make the partisan crowd go bananas, the pressure was all on Jones with her final stone.

She missed, leaving the Ontario skip an easy draw for another three points and a commanding 7-4 lead.

Against a skip like Homan, who was nearly flawless in beating Jones in Saturday's one-two playoff game and again in Sunday's final  – where she shot 93 per cent – that late three-point lead proved more than enough.

"They played great," Jones said. "They were lights out, and they deserved to win tonight. I wish it would have been closer coming home."

"I really believed we had just as much of a chance as anybody else," Homan said. "Two years ago, we weren't the team to win it. This year I thought we were right there with anybody else."

Now the question is just how high Homan's team can rise in the next 20-plus years of high level curling ahead of them.

While Jones is already regarded as one of the greatest female curlers ever, Homan's rink – which also includes first-team all-star Alison Kreviazuk at second – has shown all the signs this week of being well on their way to joining her.

The current foursome then qualified for their first Scotties in their first year of eligibility two years ago but finished off the podium as the youngest team to ever represent Ontario at the event.

"Coming fourth was a big letdown for us," Miskew said.

The team's losses there, however, showed them the level they had to get to, and all four bought into joining the competitive circuit on as full-time a basis as possible.

That involved practising every day with their renowned coach and taking two or three months off unpaid a year to travel and play, something that has been difficult even with increasing support from sponsors.

"We joke about our $10 paycheques sometimes, but none of us care," Miskew said. "This is what matters to us. This is what we're living for."

Capturing the Scotties title in an Olympic year will change their cash flow issues dramatically. Homan and company will receive $15,500 prize money for winning the event, a $10,000 sponsorship for next month's world championships, $40,000 in Own The Podium funding and $144,000 from Sport Canada in the next two years.

That massive boost should make Homan a favourite in the Olympic trials in the fall, where she'll again be one of the youngest skips competing.

"The funding makes it so much easier," she said. "It's hard to curl and hold down a full-time jobs and all the support we get from national coaches is unbelievable. It's definitely going to help our team."

And should they pull off another dramatic win there, Homan's steely gaze will be able to intimidate opponents (and others) on the world stage in Sochi a year from now.

"She's just a very serious curler," Morris said. "She has this passion for the game and really likes to win."

"Rachel believes every time she throws a shot she's going to make it," Miskew added. "And she makes so many shots that other skips wouldn't even throw because it's a gutsy call or because it looks hard. Nothing scares her. She's a very intense person and in such a good way." 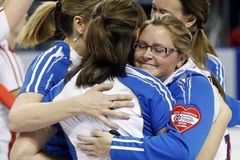 Homan and Ontario steal their way into Scotties final
February 23, 2013 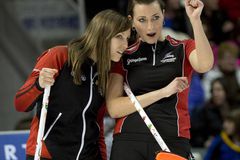