Eugenie Bouchard's struggles continued at the WTA Finals on Wednesday.

The Westmount, Que., native lost 6-1, 6-3 to Serbia's Ana Ivanovic to drop to 0-2 in her group. She will face Serena Williams in her final round-robin match Thursday but has only a very slim mathematical chance of advancing to the semifinals.

Williams was hammered 6-0, 6-2 by Simona Halep on Wednesday in one of the most lopsided losses of the star American's career.

The fifth-ranked Bouchard played outstanding tennis in the first half of 2014, advancing to the semi-finals of the Australian Open, French Open and Wimbledon. But she has struggled since August, losing in the first round of the Rogers Cup in Montreal and making an early exit at the U.S. Open.

She came into this tournament having played only two tour matches in a month due to injuries, and during a discussion with her coach Nick Saviano after the first set Wednesday, she even questioned whether she was capable of competing at the required level.

"I still had the belief I can try to work my way into it, which is what I've done in the past," Bouchard told reporters after the loss. "You're never 100 per cent perfectly prepared for every event. Just unfortunate that it would happen at a big event like this one.

"Routine balls are flying on me and little things like that. That's just consistency, practising, playing matches, which I haven't done so much."

Ivanovic had lost both her previous matches against Bouchard, at Wimbledon last year and this year's Australian Open quarter-final. However she cruised through the first set, winning all but two points when getting her first serve into play.

Saviano's pep talk seemed to have an effect on Bouchard as she responded with a much more competitive showing in the second frame.

The key moment arrived in the seventh game, when Bouchard saved five break points but double faulted on the sixth, handing Ivanovic the break. The Serb went on to take the victory.

"I felt today I had advantage at different situations because it's her first Championships," said Ivanovic. "Also, this is the first time that she's ranked higher than me in all of our matches, so pressure was on her."

Bouchard but she said wasn't intimidated.

"I've been asked a few times about it being my first time here," she said. "That never crossed my mind. I've done a lot of first things this year. You have to do everything first at some point in your life. I just was excited to come here. I see it as the fifth Grand Slam.

"I wish I could have had better results so far, but it's a great experience. It's learning. Hopefully I can be back many more times."

Bouchard is at the bottom of the Red Group standings while Ivanovic and Williams are each 1-1. Halep is leading the group at 2-0 and is all but guaranteed a spot in the semifinals. The top two from each group advance to the semifinals.

Williams' defeat jeopardized her chances of finishing the year as the top-ranked player. Had she won Wednesday, the only way she could have lost the No. 1 spot is if Maria Sharapova won the title.

Now, just reaching the final may be enough for the Russian, depending on the result of Williams' match against Bouchard on Thursday.

Halep has been careful not to raise her sights too high at this tournament. She remained cautious even after two dominant victories.

"I have confidence I can get to the semifinals," Halep said. "First I have to forget this day, but it will be hard to forget. I am so happy."

Williams served six double-faults in the opening set and had 36 unforced errors — three times Halep's total. But the key to the result was the performance on break points. Both players had six: Williams took none of them while Halep converted five.

Williams was surprised by Halep's performance, saying "she has never played like this before."

"To be frankly honest, I am looking forward to our next meeting because she is going to make me go home, train hard and particularly train for her," Williams said.

In Thursday's matches in the White Group, Carolina Wozniacki meets Agnieszka Radwanska in a clash of two players who won their opening matches, while Sharapova faces Petra Kvitova.

Bouchard is hoping for a better day Thursday.

"I kind of got killed by the two players in my pool not named Serena, so I think it can only get better from here," said Bouchard. 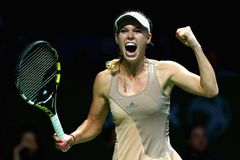 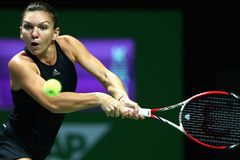 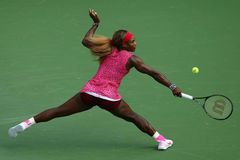