Twenty years after Nelson Mandela donned a rugby jersey in a much-celebrated gesture of racial reconciliation, a new controversy over alleged racism in rugby is threatening to tear apart the "Rainbow Nation."

As it prepares to compete against Canada and other countries in the Rugby World Cup that begins in Britain on Sept. 18, the South African national team is facing allegations that it favours white players and discriminates against blacks. Activists are launching a legal action and urging a boycott of the South African team, the Springboks.

In this sports-crazy country, Mr. Mandela's symbolic gesture in 1995 had huge political significance. Rugby was always seen as a "white" sport, dominated by the white Afrikaner minority. But when the Springboks won the World Cup, Mr. Mandela donned a Springboks jersey as he presented the trophy. It was seen as a powerful sign that whites still had a place in postapartheid South Africa. The moment was immortalized in a Hollywood movie, Invictus, where it was portrayed as a happily-ever-after ending for the long-troubled country.

Yet today there is a growing uproar over the racial composition of the Springboks. Many blacks are convinced that South Africa's rugby officials have failed to recruit young blacks into the rugby development system, perpetuating the white dominance of the sport in a country where 80 per cent of the population is black. The dispute has sparked a national debate and front-page headlines every day. It reflects an escalating anger and impatience among many South African blacks, who believe the idealized Rainbow Nation rhetoric has masked a persistent racism and lack of change in the country.

The latest furor was ignited by a dramatic revelation from the country's biggest union federation, the Congress of South African Trade Unions (COSATU). It said it had been approached by five black Springbok players and two white players who alleged that blacks were being unfairly sidelined from the team. The federation would not disclose the names of the players, saying they were afraid of being victimized.

"The lack of black players in South African rugby teams has reached a crisis," the federation said. It complained that only two black players were in the Springboks lineup in its latest match, and it alleged that "reverse affirmative action" was protecting key positions on the team for white players.

"There is a white cabal who still tries to control the rugby team and who gets to play in it," the union group said. "They must be told in no uncertain terms that this Springbok team belongs to all South Africans, and should reflect all South Africans."

In an effort to placate the critics, South African coach Heyneke Meyer last week chose eight black or mixed-race players for the final Springbok squad of 31 players in the World Cup. This appeared to satisfy the union federation, but other critics remained angry.

Another group, a fringe political party called the Agency for a New Agenda, filed court papers in the High Court in Pretoria on Monday in a bid to stop the Springboks from competing in the World Cup. It accused rugby officials of "racially biased and exclusionary methods" of selecting players, in violation of the country's constitution.

One of South Africa's most respected journalists, Mondli Makhanya, publicly declared on Sunday that he won't support the Springboks at the World Cup. "I will be openly cheering for whichever opponent they are facing, and wishing them humiliation," he wrote in a Sunday newspaper, City Press.

The Springbok squad for the World Cup is "almost snow-white," he said, calling it an insult to Mr. Mandela's efforts at nation-building. "It will not be a South African team. Rather, it will be a team that represents the stubborn refusal by some sections of our society to change."

To add to the tensions, a political party that represents mostly Afrikaner voters has begun its own protest against the Springboks, alleging that "political interference" was weakening the team by preventing some of the best white players from being chosen for the team. "It is unacceptable that South Africa is denied the opportunity to send its best team to the rugby World Cup," said the party, Freedom Front Plus.

Russian soccer official says country must crack down on racism ahead of World Cup
March 3, 2015 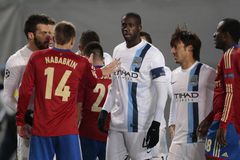 Three personal stories that show Brazil is not completely beyond racism
July 31, 2015
Follow Geoffrey York on Twitter @geoffreyyork
Report an error Editorial code of conduct
Due to technical reasons, we have temporarily removed commenting from our articles. We hope to have this fixed soon. Thank you for your patience. If you are looking to give feedback on our new site, please send it along to feedback@globeandmail.com. If you want to write a letter to the editor, please forward to letters@globeandmail.com.
Comments