Outside barn No. 2 at Hastings Racecourse in British Columbia., J. Paul Reddam stepped to the microphone, thrust his hands behind his back, and told the world that it was over.

"I'll Have Another is retired," he informed the horde of reporters, bowing his head, unable to go on. He gestured toward his thoroughbred, and the racehorse was then quietly led away.

But then, if anyone knows the unpredictability of horse racing and life itself, it may be the 56-year-old entrepreneur from Windsor, Ont., who took a chance on a bargain-basement horse and almost rode him into the history books.

As he said even before catastrophe struck: "You never know where the world is going to take you," a remark that may sound surprisingly abstract to anyone unaware of the fact that he has a doctorate in philosophy and once taught the subject at university.

In his case, the world has provided an exceptional journey, one that sparked a love of philosophy only after instilling in him the thrill of the chase.

Growing up in Windsor, a teenaged Paul Reddam became hooked on harness racing when a friend landed a job as a groom at the local track. Later, while studying for his master's degree in philosophy at the University of Toronto, he would take the streetcar to Greenwood Raceway and leave behind money he could ill afford to lose.

Of course, he also knows how to win. After cutting short his career in philosophy, Mr. Reddam made a fortune as an online financial wizard and now has a private plane as well as a home high over Sunset Beach in southern California's storied Orange County.

And clearly he still loves horses – especially the one that might have brought him the Triple Crown.

Last month, Mr. Reddam went into the Kentucky Derby with I'll Have Another, a 16-to-1 long shot he had picked up a year earlier in Florida for just $35,000. Two weeks later, the horse emerged from the Preakness with a shot at an achievement no horse had accomplished since 1978.

Even then, however, his academic training helped the high-flying entrepreneur keep his expectations in check. "Philosophy is all about possibility," he said. "And I'm thinking about the possibility of losing."

With good reason: Since the last Triple Crown champion, Affirmed, no fewer than 11 horses had won the first two legs only to fail in the third and most gruelling contest – the 1½-mile Belmont Stakes.

Mr. Reddam had been told that I'll Have Another (whose name, he says, refers to his fondness for wife Zillah's cookies – a story not everyone believes) was favoured to accomplish the feat. But he knew that nothing is certain in horse racing: He had watched the highly touted Big Brown before the 2008 Belmont and decided: "I don't think this horse could lose."

Not only did Big Brown lose, he fared so badly that his jockey pulled him up short of the finish line, much to the astonishment of the crowd.

"Who would have imagined that?" Mr. Reddam marvelled. "Therefore, I try not to get too carried away with imagining a victory or assuming a victory."

This inclination to keep his feet on the ground may spring from his upbringing in Windsor, where his mother, Grace, juggled family life and a job as a legal secretary while taking night courses to become a lawyer. "I'm very proud of what she did," he said.

His father, John, meanwhile, went to night school for 10 years to earn his master's degree in business administration, eventually becoming president of a mortgage company. "He needed somebody in his company," Mr. Reddam said with tongue in cheek, "and through the process of nepotism, he hired me."

The jump to being a mortgage broker came after Mr. Reddam had earned his doctorate at the University of Southern California at Los Angeles, where he both started his working life by teaching philosophy at Cal State University, and rekindled his passion for racing. He recalled seeing Santa Anita, the famed track with the San Gabriel Mountains as a backdrop, and thinking: "Where has this been hiding?"

In 1988, he bought his first thoroughbred with a group of friends, but he soon realized he needed more than a professor's salary to play the game in earnest. One day, he walked into class and halted his lecture after 10 minutes to tell the students how a horse he had bet on had come within inches of earning him $60,000 – money that would have been a life changer.

After that, he knew he wasn't cut out for academics. "The way they [professors] measure themselves, it's not like the business world, with money," he explained. "It's by publishing accolades or being able to be in some argument with some other professor and prove they are right."

In search of a greater reward, he went to work for his father and then used what he learned to create a novel way of selling mortgages – online. Four years after launching DiTech in 1995, he sold the Internet lender to General Motors for more than $200-million, and promptly retired at the age of 44.

The sale allowed him to get serious about thoroughbred – he now owns 30 racehorses plus perhaps 90 broodmares and foals – but his immediate goal, he said, was just to have some fun.

He bought Swept Overboard at a sale for $700,000, watched him win the 2002 Metropolitan Mile in New York, then sold him to a Japanese breeder for $3-million. Later, he won a couple of Breeders' Cup races with Wilko (2004) and Red Rocks (2007) and he became a fixture at the upper echelons of racing.

Not that he gave up business altogether. Soon bored with retirement, he started CashCall, a company based in Anaheim, Calif., that makes emergency loans to people who have trouble borrowing elsewhere.

Noting that while teaching and gambling he was "broke like everyone else," Mr. Reddam said he sympathizes with people who need money. However, his high-risk borrowers can expect to pay interest rates so high (in some cases almost 185 per cent) that governor Jerry Brown likened the company to a loan shark when he served as the state's attorney-general.

The late actor Gary Coleman, having fallen on hard times after his glory days as the child star of TV's Diff'rent Strokes, raised eyebrows, first by becoming a CashCall customer and then by agreeing to act as its pitchman to erase his debt.

"Cashcall helped me. They can help you too. ... Pay your bills on time and everyone will love you," he says in one ad (several have been immortalized on YouTube with such titles as Gary Coleman Loses His Mind).

Mr. Reddam concedes that his company has been heavy-handed when clients fall behind. "We tell people to borrow money and repay it quickly, because the rates are high," he told The New York Times this week. "I'm not saying these loans are for everybody. You should think of what you're doing."

He certainly appeared to know what he was doing last month at the Derby when he placed a six-figure bet, getting seven figures in return and saying afterward that, as sportsman, he would keep I'll Have Another racing next year rather than cash in at the breeding shed.

Of course, that was before he found out where the world would take him.

Beverley Smith and Hayley Mick are Globe and Mail sportswriters.

This story corrects the location of Hastings Racecourse to British Columbia 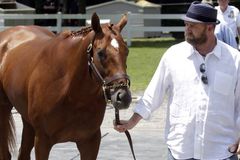 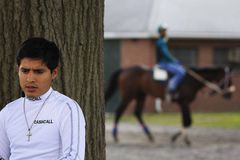