On Tuesday night in a three-set battle at the Rogers Cup, there were definite glimpses of the Genie Bouchard who excited a nation during her remarkable 2014 season, the aggressive stone-cold killer who never seemed intimidated.

In losing the first match of her home tournament for a second straight year, the 21-year-old Canadian tennis star still looked like a player bewildered and searching for a way out of a lingering slump that has seen her lose now 12 of her last 14 matches. Yet as she fell 0-6, 7-5, 2-6, to Swiss rising star Belinda Bencic, the Montreal native now ranked No. 25 in the world played pain-free and showed signs that she's starting to remember her old self.

The 2015 season has been a shocking turn from last season, when the confident and impatient youngster marched to the semi-finals at the Australian and French Opens, then on to the Wimbledon final, which catapulted her to No.5 in the world and spiked expectations. With a string of first-round exits sprinkling Bouchard's 2015 season so far, her shot a toppling 18-year-old Bencic, the World No. 20, seemed slim, especially as abdominal injuries have plagued her in recent months. But she made it a match, and perhaps more importantly -- she seemed pleased.

"I played the whole match pain free and it was one of the goals -- maybe the most important one -- so I was happy about that," said an upbeat Bouchard after the match. "I just feel like I need more matches to really get into it."

She came onto Centre Court at Aviva Centre in red and white to cheers from a bunch in the all-familiar Genie's Army, decked in white t-shirts spelling out G-E-N-I-E. She was quickly obliterated 6-0 in the first set and the crowd began to turn its interest to emerging Canadian star Francoise Abanda pushing Tour veteran Andrea Petkovic to three sets next door (a match Abanda would later lose, the last of the Canadian singles players to fall in Toronto). Bouchard sailed balls long, struggled to get a serve in and kept clunking shots into the net. The Canadian star seemed void of all confidence.

But she was a different player in the second set. She went up 3-0, and the crowd started to awaken as they saw her first fist pumps. They may have allowed themselves to imagine they might see Bouchard courageously dig out of the slump.

But then Bencic turned the tables as unforced errors began once again to plague Bouchard. The Swiss player stole the momentum and had Bouchard on the ropes, up 5-3 and serving for the match.

Unlike a year ago, when she was ousted in her first match at the Rogers Cup in Montreal, Bouchard this time didn't crumple in frustration. She survived several break points and won the set.

"I didn't freak out even though I lost 6-0, I didn't panic," said Bouchard. "I started feeling a little more like myself… I feel like I handled myself better today than I did last year in Montreal."

Bencic got the best of the Canadian in the third set. The tale of the night was that 56 unforced errors caused Bouchard's downfall – 32 more than Bencic had. Bouchard didn't retire due to pain or feel like leaving the court like last year in Montreal, and that felt like a stepping stone under the pressure of playing at home.

Some 13 months ago, confident returns and cross-court winners seemed like a sure thing for Bouchard, and a victory over the world's 20-ranked player would have been assumed. But ranked lower and facing tougher draws in tournaments, the slogging is far tougher now. She'll face many players like Bencic as she tries to battle back.

She plans to play the Western & Southern Open in Cincinnati next week, looking for more matches in preparation for the U.S. Open.

"I look to end the year on a much better note than I started….I'm just so eager to play matches and to feel good, to be healthy and perform well, I don't have any expectations beyond that," said Bouchard. "It's easy to let yourself get negative; it's been a tough road and a long patient battle." 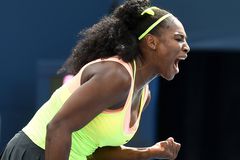 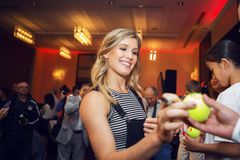 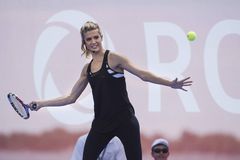