As Milos Raonic plays closer and closer to a spot among the Top 5 players in the world, his global popularity just keeps growing, as do his off-court opportunities.

While he didn't play his finest tennis Thursday at the Rogers Cup, he got the job done. As he dispatched Julien Benneteau 6-3, 4-6, 6-4 to advance to the quarterfinals at his hometown Rogers Cup, many of his sponsors were on-hand to see their athlete in action. At age 23, Raonic is already the World No.6, and as his promise swells, his marketing appeal has widened along with his portfolio of sponsors. The list rivals that of the ATP Tour's elite. It includes Rolex, who has added him to its elite list of athletes. New Balance signed him to a mega-deal to make him their first-ever tennis player. Canada Goose just announced a new partnership with him, hoping his global appeal can help spread the Canadian brand worldwide.

Raonic has businesses thinking outside the box when it comes to using him, and he likes that. He is the first warm-weather athlete with whom Canada Goose has partnered, and he will appear not in their iconic winter coats, but in light jackets. He joins a list of endorsers that includes arctic adventurers and scientists.

"I think he's the perfect match for us...Canadian talent that's making a name for our country around the world," said Dani Reiss, President & CEO, Canada Goose. "Our Goose People are people who dream big dreams and take big swings, in whatever way they choose, no matter where they live or play around the globe."

New Balance wanted to break into tennis with a young player who had huge potential and rock-solid character. They give him creative input into the design of things he wears, even brought him to see clothing and shoes being made. The 6-foot-5, 218-pound star talks regularly to designers about the length and style of shorts for his long legs or the perfect fit for the compression sleeve he likes to wear on his right arm (it's not for any medical reason, he just likes it). Raonic helped design the specially-made Canadian Maple Leaf t-shirt he's worn at Rogers Cup (it has five small stars on the chest for the number of ATP titles he had won, but was made before he won another Sunday in Washington). He can actually text the designer during an event, and New Balance will have a seamstress in that market tailor the shorts to his needs if they're not precisely right.

"Our philosophy on deals for Milos has been quality over quantity," said his manager Austin Nunn. "We enjoy doing things that are outside the box, things where he has lots of input."

The list of people hoping to meet Raonic also keeps growing, especially while playing in Toronto. Cleveland Cavalier Tristan Thompson came this week to meet him. Top overall NBA draft pick Andrew Wiggins had arranged to come meet Raonic too, but couldn't make it, (likely because he has reportedly been traded to the Minnesota Timberwolves).

The admirers haven't seen Raonic's finest yet through two matches in Toronto, both three-setters. In Friday's quarterfinal, he will be the heavy favourite against unseeded Feliciano Lopez, the World No.25, who upset fifth-ranked Tomas Berdych Thursday night.

"Today I was much more in a comfort zone," said Raonic. "I had to adjust a little bit after playing poorly in that second to lose my serve twice, but other than that, the two sets I won I didn't face a single break chance. Did well there and created my opportunities on the return games.

If the Canadian wins, he could be on course for a Saturday meeting with Roger Federer, who survived a three-set thriller over Marin Cilic, 6-7, 7-6, 4-5. Federer meets No.4-seeded David Ferrer on Friday.

Fans won't be seeing Novak Djokovic play on Friday though. The World No.1 was stunned by 13-seeded Frenchman Jo-Wilfried Tsonga in the third round on Thursday, 6-2, 6-2. Losing the top seed and seven-time Grand Slam champion is a hit for the tournament. Many would have projected Djokovic would meet No.8-seeded Andy Murray in Friday's quarterfinals, but Tsonga will face the Scot instead.

"I haven't played even close to what I intended before going to the court -- just nothing was going.  No baseline, no serve, no return," said Djokovic. "Obviously I'm disappointed that I lost this early in the tournament, but on the other hand I had a tough draw yesterday and today again. Tsonga, who played in a very high level, had great quality shots, all I can say is well done and I have to move on."

Raonic is the last Canuck standing at Rogers Cup
May 12, 2018 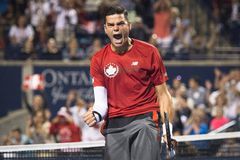 Lessons for Eugenie: Success means pressure to play well will build
May 12, 2018 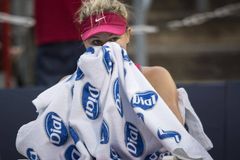 Wozniacki to face Rogers, instead of Bouchard, in Rogers Cup third round
May 12, 2018 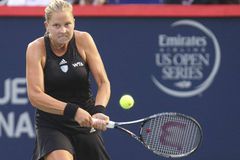 Djokovic narrowly avoids being upset by Monfils at Rogers Cup Toronto
May 12, 2018 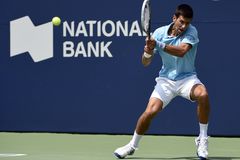 Bouchard takes loss with grace as Montrealers’ dreams of Genie dashed
May 12, 2018 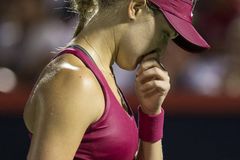