Former professional wrestler C.M. Punk has signed a multi-fight deal with the UFC, and he intends to make his mixed martial arts debut in 2015.

C.M. Punk is the stage name of 36-year-old Phil Brooks, a career pro wrestler who became one of the WWE's biggest stars in recent years before falling out with the company.

Although Brooks has gym experience in Brazilian jiu-jitsu and other martial arts with a member of the vaunted Gracie family, he has never fought an MMA bout. That didn't deter him from signing with the world's dominant MMA promotion, and UFC President Dana White welcomes the publicity and pay-per-view sales to be generated from Brooks' arrival.

"It was actually a really easy decision to make, and time will tell how wise a decision it was," Brooks said. "I finally found something I can put 100 per cent of myself into. ... I'm a guy who likes goals and challenges, and this is the biggest challenge I've ever put in front of me."

White announced the deal during the UFC 181 pay-per-view show, making sure the promotion's biggest fans heard about the move first. The year has been difficult at times for the UFC, with several injured champions, a crowded schedule and the extended absence of longtime mainstays, including Anderson Silva and Georges St. Pierre.

The UFC clearly needs new, marketable stars, and the loquacious Brooks will be must-see TV if he's able to compete.

White believes Brooks will be ready for a fight in roughly six months, although Brooks still hasn't decided where he'll train for his debut. Brooks is curious whether he can cut weight to the 170-pound welterweight limit, but might start as a 185-pound middleweight.

Brooks recognizes the hubris inherent in starting an MMA career in his mid-30s, but the combination of the challenge and the UFC's financial offer was irresistible.

"I respect everybody that's stepped into the cage, and before I'm done here, everyone will respect me as well," Brooks said. "People close to me know how long I've talked about doing this. This isn't so much about UFC. It's about me, and what I know I have inside of me. I want to prove to people and to myself that this is something I've thought about for a long time and I want to do."

The UFC realizes the publicity value of signing pro wrestlers with a modicum of MMA skills. Famed pro wrestler Brock Lesnar became the UFC's biggest pay-per-view star when he entered the promotion in 2008, bringing millions of fans from the staged entertainment to actual athletic competition.

Lesnar defeated Randy Couture and held the UFC's heavyweight championship for nearly two years, defending it three times. After two losses and a bout with diverticulitis, he returned to pro wrestling in 2012, even "beating" Brooks in a WWE show last year.

"You hear positive and negative things about Brock, but if somebody is going to compare me to Brock Lesnar, I'll gladly take that," Brooks said. "I think I'm a little cuter."

Brooks performed in the WWE from 2011 until early this year, when he left the company with some acrimony. Brooks confirmed he is finished with pro wrestling.

As for his decision to start in the UFC instead of honing his skills in a smaller promotion, as Lesnar did, the veteran showman is pragmatic about his value.

"The big business is your first fight," Brooks said. "Win, lose or draw, if I fought somewhere else, maybe a little bit of the lustre would have gotten knocked off. This is very much a business as well as fighting. There's both sides of it, and I think it merged perfectly. This is something that I'm doing for myself, to test myself. It's not all about the money, but it's also nice to get paid." 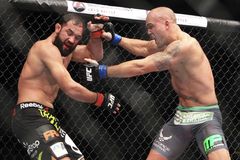