Six months ago, Canada's Stacey Allaster stepped down as chairman and CEO of the Women's Tennis Association saying she was burned out from the international travel. Now, the United States Tennis Association has lured her back to the sport with a tailor-made job offer she couldn't refuse.

The USTA on Monday will introduce Allaster, a native of Welland, Ont., as its new chief executive of professional tennis. It's a new position – setting the strategic vision for pro tennis in the United States, including its marquee Grand Slam event, the U.S. Open.

As leader of the WTA starting in 2009, Allaster was behind many big initiatives that promoted the sport and boosted the visibility of some of the world's most famous female athletes. She fought for increased prize money for women, fan-friendly improvements to the game, new uses of statistics and technology and a rich media deal for the Tour that, at $525-million (U.S.) over 10 years, is the biggest ever in women's sports. She drove extensive global growth, especially into Asia-Pacific, and secured an estimated $1-billion in contracted revenues, making Forbes's list of the most powerful women in sports.

The University of Western Ontario graduate left the WTA Oct. 2, saying that the 150-plus days of international travel every year had taken its toll, and she wanted more time with family. Since then, the 52-year-old has relaxed at home in St. Petersburg, Florida. She and husband John vacationed in India and renewed their wedding vows. She took trips with their 11-year-old twins, Alexandra and Jack. Meanwhile, the USTA was quietly interested in recruiting in her.

"I started thinking 'Wow, this is an opportunity for us,'" said Gordon Smith, USTA chief operating officer and executive director, when he was reached by phone Sunday in San Diego after he introduced Allaster at the organization's annual general meeting in San Diego.

"I wanted to give her time, but I knew what I wanted to do. I approached her in January, and we're old friends and I didn't mention anything about a job, but asked if she'd like to catch up and visit. So we met at the Tampa airport. Somewhere in the middle of the conversation, I just said, 'You've got to come work for us.'"

Allaster took some time to think it through, since her career in tennis had provided little down time. She had gone all out from the time she started in the business, from cleaning courts at the Welland Tennis Club at the age of 12 through stints with the Ontario Tennis Association and in various jobs with Tennis Canada – ultimately as tournament director of the Canadian Open (and the only female tournament director within the Masters Series).

Smith called her daily from the Australian Open about the job. It would need to work for her family. Over the months, they eventually came up with a custom-made position. She will work some of the year at the USTA's new state-of-the-art home in the Lake Nona area of Orlando, a 100-court facility for both community tennis and player development, from beginners to pros. Summers will be in New York working on the Open, with her family in tow. The job will play to her strengths: player relations, business strategy, innovation and fan engagement.

"I didn't think I'd be back working in tennis, certainly not this quickly, but the USTA came up with an opportunity that was too good to pass up," Allaster said, also in San Diego. "It hits my two sweet spots: tennis and women in leadership in sport."

The U.S. Open draws more than 700,000 spectators each year, and Serena Williams remains the world's top-ranked female singles player; Venus Williams, Sloane Stephens and Madison Keys round out the other American women ranked among the top 25 in the world. But there has been a void of Grand Slam-winning American male singles stars since Andy Roddick's U.S. Open victory in 2003. Smith and Allaster say the USTA is working to improve in all areas, from filling the American pipeline with talented players to making all of its U.S tournaments better.

"She brings the highest level of expertise in the world of professional tennis," Smith said. "We're looking for someone to leverage the U.S Open and our other assets for the benefit of growing the game. No one is better qualified to do that than Stacey." 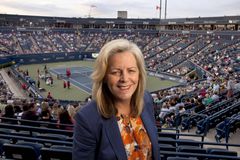