Milos Raonic is looking forward to taking his big serve to UBC again for Canada's Davis Cup quarter-final tie against Italy in Vancouver.

The Doug Mitchell Thunderbird Sports Centre, named Tuesday as the venue, has been kind to the Canadian tennis squad, which upset Spain there earlier this month to advance to the World Group quarter-finals for the first time.

"I feel good about it," said Milos Raonic, Canada's top player, who is ranked 14th in the world. "I've personally played well there. I think we've played well as a team in the UBC arena."

The team for the April 5-7 best-of-five series against Italy will be chosen by captain Martin Laurendeau at a later date. But one thing is known already: Raonic will be tagged as Canada's top player.

Raonic feels confident at UBC, where he has won all of his Davis Cup singles matches. The hard court, laid over a cement floor, is conducive to his powerful serve, which reached speeds between 220-230 kilometres per hour against Spain.

The 22-year-old Thornhill, Ont., native said he is honoured to lead Canada into its historic quarter-final tie against the Italians. Raonic, who won an ATP tournament in San Jose on the weekend for the second straight year, said he and his teammates are improving, so it's a good time to be on the Davis Cup team.

"We have a lot of faith that we can still achieve moving forward," said Raonic, who begins play Wednesday at an ATP tour event in Memphis.

"And it's important to me because I know it's a big goal, Davis Cup, but I also know for ... the growth of tennis in Canada that Davis Cup is a platform that can't be matched with too many individual results as far as growing the sport."

Laurendeau will travel to upcoming ATP tour stops to evaluate his players before he chooses his lineup.

"They have to earn their spot and show us all who's in good form and who's deserving of playing," he said.

Canada's lineup could see one significant change against the Italians. Jesse Levine, a dual Canadian-American citizen who was born in Ottawa but grew up in Florida, is now eligible to play for Canada.

"With (Levine) being eligible this time around, there's more options on the table, for sure, and that's a good thing," said Laurendeau.

Based on his 94th-place world ranking, Levine is rated as Canada's second-best singles player. He poses a difficult decision for captain Laurendeau as he weighs whether to include Frank Dancevic of Niagara Falls, Ont., ranked 135th, who won his opening singles match against Spain.

Vasek Pospisil of Vancouver, ranked 129th, rates as Canada's next-best player and should earn a spot. Pospisil will likely get consideration for singles play after being limited to doubles play against Spain because he was recuperating from mononucleosis.

Doubles ace Daniel Nestor, who was feeling ill during the doubles match against Spain, which he and Pospisil lost, is also expected to compete again in Vancouver. Laurendeau said Nestor is doing everything he can to get ready for Italy.

"He's playing this week in Memphis and then Indian Wells (in California) and Miami, and those are big events," said Laurendeau. "(Nestor) loves the big events and he considers Davis Cup to be at the top of his list. So he's looking forward to it, and I'm very grateful as a captain to count on him."

The tie against Spain set a Canadian Davis Cup attendance record with 17,805 spectators taking in the event over the course of the weekend.

The same seating capacity of approximately 6,200 will be used for the tie against Italy.

Gavin Ziv, the event's director, said few other venue options were considered because of the tight turnaround time between the last tie and the next one.

This marks the first time Canada is facing Italy in Davis Cup play. Contrary to the confrontation with Spain, which was missing its top four players to injury and rest, Canada is regarded as less of an underdog against the Italian squad.

Italy was crowned Davis Cup champion in 1976, and has finished runner-up on six other occasions. But Italy's first-round victory over Croatia in Turin this year marked the only time since 1998 that the Italians have advanced to the second round in World Group play.

Fabio Fognini, currently ranked 44th, led Italy into the quarters with a victory in the fifth and deciding rubber against Croatia.

Although Italy does not have any big names on its squad, Raonic is familiar with it.

"I've practised with Fognini once or twice," said Raonic. "I know him in that sense. I know what he's capable of. He has very good hand use, he's scrappy and he's quick, and he likes to hit the ball hard."

He also knows Flavio Cipolla, ranked 99th in the world, from practices and an exhibition match.

"He makes you play a lot of balls. He's very good in that sense. He's the type of person that you have to go out there and beat. He's not going to beat himself." Home court could be ace up Canada’s sleeve against Spain
February 1, 2013 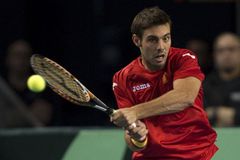