Eugenie Bouchard's brilliant season on the WTA Tour came to an anticlimactic end.

Bouchard was defeated 6-1, 6-1 by Serena Williams on Thursday, eliminating her from semifinal contention at the season-ending WTA Finals.

The native of Westmount, Que., struggled at the prestigious tournament, failing to win a set in three straight losses against Simona Halep, Ana Ivanovic and Williams.

Still, the mere fact that Bouchard made it to a tournament reserved for the top eight players in the world in her first full season on the tour outweighs the disappointment of her tough finish in Singapore.

"Yeah, it's been fun," Bouchard said of her WTA Finals debut. "Definitely a unique experience compared to any other tournament, one I would love to come back to in the future.

"Definitely disappointed with my play this whole week, but I feel like I can do so much better. That's a positive I can take out of it as well."

Despite the way it ended, this season was a resounding success for Bouchard. The 20-year-old made a big splash at the Grand Slam level, advancing to the Wimbledon final and the semi-finals of the Australian Open and French Open.

She rose to No. 5 in the world, the highest position ever achieved by a Canadian, and won her first WTA tournament in May in Nurnberg, Germany.

"It's been crazy, hectic, intense. I don't know, those words come to mind," Bouchard said of the last 10 months. "Really enjoyable as well. No matter how tough it's been, I love playing tennis."

Bouchard came into the tournament with only two tour matches in a month due to injuries, and won only 11 games across her three matches.

"I didn't have ideal preparation but that can happen to a number of players at any given tournament," she said.

Bouchard said she was impressed with the carnival atmosphere of the WTA Finals, complete with pyrotechnics for the player pre-match introductions.

"I tweeted that before I knew the entrance was so grand. Then the first time I walked out I was like, 'This is actually like the Hunger Games,"' she said.

"Yeah, just like we're walking out, one person left standing, walking out to our death maybe. It was intense."

Bouchard said she'll take some time off to relax before next season starts early next year.

"I'm going to go into hibernation mode. Don't know when I'll wake up. Might be days; might be weeks," she said.

"I'll keep you guys posted when I do wake up eventually. Going to eat some cookie dough, hug my little brother. That's all in my plans right now."

Williams rebounded from the worst beating of her professional career to rout Bouchard, yet her title defence remains in the balance.

Williams was humbled by Halep the previous day, when the 18-time Grand Slam champion won only two games.

Williams will make the final four unless Ivanovic manages to beat Halep in straight sets on Friday. Halep is guaranteed a semifinal berth.

Meanwhile, the outcome of the other group remains uncertain, with none of the four players qualified for the semis, and none out of contention.

Sharapova, who needs to win the title and rely on Williams not reaching the final if she is to bump the American from the top spot, fell to a 0-2 record while Kvitova is 1-1.

In order for Sharapova to progress to the semis, she will need to win her last match against Agnieszka Radwanska and rely on Caroline Wozniacki beating Kvitova, and have both matches decided in straight sets.

Williams credited her coach Patrick Mouratoglou with lifting her out of the doldrums and preparing her for Thursday's match.

"I started to believe that maybe I could come play another match," Williams said. "I wasn't quite sure that I could.

Williams was fatalistic about whether she will make the semifinals and remain in the running for a third straight title at the season-ending championships.

"If I wanted to win and be a part of the event, I should have won my match yesterday or should have done better," Williams said. "If I don't qualify, I'll be sad, but it wasn't my year. I'm not going to fall out and die."

Sharapova, who lost the Wimbledon final to Kvitova in 2011, beat the Czech left-hander in their past five meetings and started brightly by winning the opening two games. But Kvitova took over from there, winning 11 of the next 12 games.

Kvitova said she was feeling burnt out during her opening loss to Radwanska, so took an unusual approach to freshen up for Thursday.

"When I lost against Aga ... I was so tired and sick of the tennis for a moment," Kvitova said. "So I didn't practice today at all, and I just really relaxed and cleaned my mind a little bit."

Earlier, Wozniacki moved closer to a place in the semis by beating Radwanska 7-5, 6-3 for her second win in the group stage.

The first set, which began with four service breaks in five games, lasted 67 minutes and contained some lengthy rallies that were punctuated by superb shot-making.

Radwanska ended up the loser but played a couple of extraordinary volley winners: One picked up at her shoelaces and lifted diagonally over the net, and another leaping effort played with her back to the net.

"I just needed some more good serves as well in that match," said Radwanska, who has a win and a loss.

Wozniacki was able to smile after Radwanska's trick shots.

"I'm like, 'Okay, you know what, that's just too good,"' Wozniacki said. "You can either get frustrated or laugh — it's better to laugh." 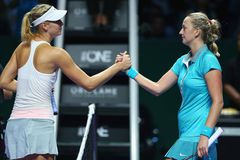 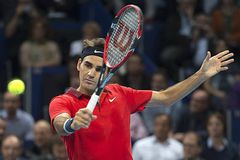 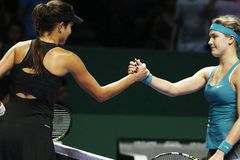 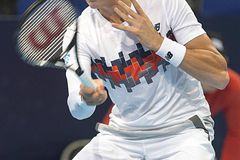