Figure skating in Spain, the land of the bullfight? Hardly. Somehow, Fernandez has emerged from a country that probably doesn't have as many rinks as there are in the block surrounding the Hershey Centre (eight rinks if you count the Mississauga Iceland across the street)

At his national championship, the men's event attracts only about five or six senior men. Yet out of Spain has come Fernandez, who defeated Patrick Chan, holder of three world point records and the stylish former world champion Daisuke Takahashi of Japan too.

Fernandez, with his effortless quadruple toe loop and 84.71 points – 13 more than he had ever earned for a short program in his career – won the event by five-hundredths of a point over Takahashi, who was 1.38 points ahead of Chan with 83.28.

Fernandez is a 20-year-old skater from Madrid who took out a new lease on his skating life by moving to Toronto to train with former world champion Brian Orser, the man who trained Yu-Na Kim to win the Olympic title in Vancouver.

Fernandez knew of Orser and immediately thought of him when he decided to leave his previous coach, Nikolai Morozov after the European championships last season when he finished ninth. He was 10th at the world championships.

At the world championships, Fernandez felt that Morozov was paying too much of his attention to his other students, French skater Florent Amodio, who won the European title and two-time world champion Miki Ando of Japan.

He knew it just wouldn't work.

But in four months he has turned from afterthought to world beater under Orser's care, sometimes bullying the laid-back trainer into practicing, steering him into a new direction, fulfilling Fernandez's desire to be taken seriously in the world of skating (for the past two years, he has played a drunken pirate in his free skate).

Fernandez's best lesson is having an experience like he did Friday night, when Chan playfully ruffled his hair and told him: "This is your day."

Mostly, it's to "know that he fits in with these guys," Orser said. "He's always looked up to Patrick and Daisuke. And I don't think he really honestly believed that he was one of those guys."

Orser says Fernandez is a bit of a loose cannon and he doesn't train his spins enough. He lost a few points on his spins, and had he done them all properly, he might have had 89 points, getting close to record territory. Chan set the short program record of 93.02 points last year at the world championships in Moscow.

"We're trying to reel him in a bit," Orser said.

Orser and choreographer David Wilson had to quickly get Fernandez on track when he moved to Toronto to train full time at the Toronto Cricket Skating and Curling club. Wilson had a full card, but did Fernandez's long program first, and only started work on the short program before he had to leave to work with Kim in South Korea.

Former world champion Jeffrey Buttle, a protégé of Wilson, finished the program. But, Orser found himself alone at the club, faced with having to design Fernandez's costumes, something he'd never done.

"What do I do?" Orser asked Petra Burka, the 1965 women's world champion, who now works with Canada's developing skaters. "I don't know what to do."

Orser designed the short program costume, snapping a photo of a costume he liked on the So You Think You Can Dance show while lying in bed one night.

For the long, Burka helped him. Fernandez wanted to skate to classical music (he's skating to Verdi's Rigoletto, one of Orser's favourite pieces), so Orser scanned the internet, looked at the opera and saw lots and lots of frills. "I don't want that for him," Orser said. "And I'm sure he doesn't want that."

Strangely enough, Fernandez looks like a version of the younger Orser, who last competed in 1988: his head, his hair, his body movement.

Fernandez doesn't mind. "I'm so surprised," he said after the win. "It was an amazing night. It was something to remember all my life."

For now, he's ensconced with Orser in Toronto. He doesn't sound like he's leaving any time soon. He'll throw the technical book at his new rivals on Saturday in the free skate: two quads, two triple Axels, and his new look: a Spaniard in Canada.

Russian bear getting its growl back
October 29, 2011 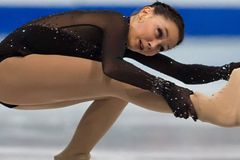 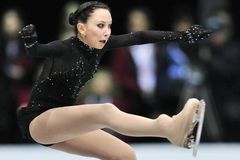 Patrick Chan looks to put it all together
October 27, 2011 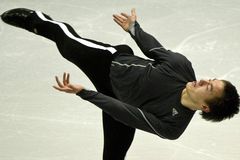