This time around it was Canada's turn to understand how it feels to have a gold medal around your neck, only to have your bitterest rival pull it off at the end.

Canada entered the third period of Thursday's women's hockey final leading 2-1. Having overcome an early spate of soft penalties, they had the momentum. With the second goal scored by Marie-Philip Poulin – scorer of the winners in Vancouver and Sochi – they had the history. But with six minutes remaining, the Americans tied it. And then the Americans came back on them. Overtime was entirely dominated by the U.S. It ended in a 3-2 shootout, one of the all-time American victories in any Olympic sport.

Four years ago in Sochi, it was Canada who pulled the rug out after trailing in the third. The Americans spent the next four years obsessing over not being seen to obsess over it. But the loss defined their programme. That curse is now broken, and so on to Beijing to try again.

Read more: What to watch on Day 13 at the Winter Olympics

The loss ends Canada's historic run of dominance at the Olympics. This team had not dropped a game at the Winter Games in 20 years.

Considering the size of the stage, this might have been the greatest game of women's hockey ever played. The other contenders would be just about every other time Canada's play the U.S. in an Olympic final.

No rivalry in sport pays off in entertainment/cardiac-distress more reliably than this one. It is a guaranteed classic that will hopefully go on for years to come.

Regardless of the winner, the tournament was a small watershed for the game. This is now the only version of Olympic hockey that is best-on-best.

A few days ago, the International Ice Hockey Federation announced that it would expand the next Olympic women's hockey draw to ten qualifiers rather than the current eight. The only purpose of that is to draw the host nation, China, into the mix.

The IIHF president Rene Fasel got a few looks when he claimed that the women's game was moving toward parity more quickly than it took the men's.

In 1930, hockey players tied their skates to their street shoes, played with a tree branch and smoked two packs a day. I'm not sure the analogy fits.

There are a myriad of reasons why Canada and the U.S.A. outstrip everyone else – the players grow up in the sport, there is real glory to be had in playing it for your country, year-round training and all the rest – but it functionally comes down to will and money.

The U.S. and Canada are willing to pay women to do this as a job. In most other countries, they wake up to women's hockey a year before an Olympics, throw a team together and not even bother to hope. The only point is being there.

This time around, the Koreans – all of them – did hard work in selling the idea that this game can be more than a way to pad out a national team as it walks in for the Opening Ceremonies.

The unified South and North Korean women's team was an awful mess on the ice. Despite all the wishing, there was no real hands across the aisle in the locker room.

After the final game, South Korean player Randi Hesoo Griffin, an American by birth, described the dynamic as "a complex experience. There's a lot of different layers to it. And that's really all I can say."

Put through the hockey-player-to-English translator, that's "We didn't appreciate getting our team turned over a week before the Olympics; and we didn't like the new kids much."

But if it didn't work for the players, it sure did for everyone else. Women's hockey became the most potent symbol here of the real point of the Olympics – as a diplomatic/charm exercise.

People who would otherwise not have given a second thought to the women's game paid attention. They certainly did in this country. Aside from speed-skating, women's hockey was the great national obsession.

And all those people cannot have failed to notice the quality of the other teams. Even at that second tier, it's improved.

The Russians operated on a professional teardown model. They were young and bad in Pyeongchang, suggesting they will be older and good in four years time. The Finns gave the Americans a real run in the round-robin. Switzerland swept their group.

These teams still lack the fine skills and understanding the Americans and Canadians have, but that can be developed. All it requires is time and not so very much money.

Back home, the women's team are now our perfected representation of Canadian skill. The men's team is a hodgepodge until the NHL figures it out. We can't count on curlers the way we once did. Every other sport is a talent crapshoot. Except women's hockey.

That aura is brightened by the simplicity of their goal (they have just the one).

The women's team spends 1460 days a cycle preparing for one three-hour window, and then they start over again. They may be the most focused workforce in the country.

This rivalry is now the defining feature of our international hockey imagination. Far more than anything that happens at a World Cup or whatever phony patriotic showcase the NHL comes up with next. Because it is predictable. We know we can count on it. No other sport can say that.

A win or a loss against America doesn't change that nexus. All it does is set the table for the next Canada-US hockey summit, which is now forty-seven months, seventeen days and a few hours away. Adjust your schedule accordingly. 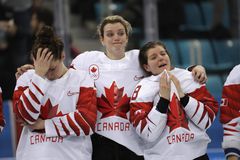 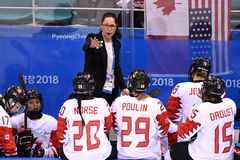 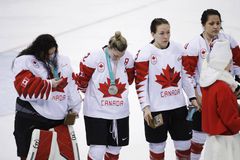