Canadian skier Cassie Sharpe completed her opening run at Phoenix Park, tapped her heart two times and smiled as a look of relief washed over her face.

She set the early tone in the halfpipe and only got stronger on her way to a gold medal at the Pyeongchang Olympics.

France's Marie Martinod had a 92.60 in her second run and was gunning for Sharpe in the third run but crashed out, guaranteeing Sharpe gold.

The best of three runs is a skier's final score in ski halfpipe, so with Martinod having to settle for silver Sharpe's final run was a triumphant victory lap.

American Brita Sigourney took third with a 91.60 in her final run.

Just like a day earlier when she took top spot in qualifying, Sharpe was confident from the start on a cool, sunny morning at the Pyeongchang Games.

She attacked the pipe by starting with a mute grab, followed with a tight inverted 900 tailgrab and had the speed to close with a 900 lead tailgrab.

Sharpe changed it up a bit for her second run, adding a half-rotation at the end for a 1080 tailgrab.

The 25-year-old Canadian was getting over four metres of air on some tricks.

Calgary's Roz Groenewoud finished 10th with a score of 70.60.

Sochi Olympic champion Maddie Bowman of the United States finished last in the 11-skier field. She crashed hard on her final run but was able to ski to the finish area on her own.

Sharpe posted three victories earlier this season. She won silver at the 2015 world championship and took X Games gold in 2016. 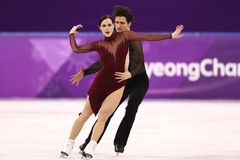