Professional courtesy dictates that Olympic bid bosses do not criticize rival bids, so when I ask Luca Cordero di Montezemolo, chairman of the Rome 2024 bid, about the consequences of a Donald Trump victory in the U.S. presidential race, he does not bite.

Instead, he rolls his eyes – no words necessary. "I don't think Trump will win" is all he allows.

For the sake of the Los Angeles bid, the city had better hope he doesn't.

Los Angles, Rome, Paris and Budapest are the final competitors for the 2024 Summer Games. The prizefight officially got under way late last month, when the four cities submitted the first parts of their bids to the International Olympic Committee.

Officially, the IOC members do not take politics into account when they select the winning city. But of course they do.

The failure of New York to land the 2012 Games (which went to London) and Chicago's loss of the 2016 Games (to Rio de Janeiro) were widely attributed to anti-American sentiment within the IOC at the time. Even lobbying by U.S. President Barack Obama was not enough to spare Chicago from an early and humilitating defeat in the voting process.

If politics again play a role, Los Angeles will have a big problem if Trump wins the November election (his victory Tuesday night in the Michigan and Mississippi primaries virtually assured he would become the Republican nominee). The New York tycoon wants to ban Muslims from entering the United States. He wants to build a wall along the U.S.-Mexico border to keep illegal Mexican immigrants off U.S. soil.

A Muslim ban would surely trigger a Muslim boycott of the Los Angeles Games. A wall would surely trigger a Mexican boycott – perhaps a boycott by all the Latin American countries. There are 50 predominantly Muslim countries in the world and 20 Latin American countries. A potential boycott by roughly half the planet would not be lost on the IOC if Trump were to take the White House.

We've been here before. The United States and dozens of its allies boycotted the 1980 Summer Olympics in Moscow. The Soviets retaliated by boycotting the 1984 Games in Los Angeles.

On Tuesday, Los Angeles Mayor Eric Garcetti insisted his city's chances of winning the 2024 Olympics would not be affected by the winner of the presidential race. "This is something that transcends politics," he said at a U.S. Olympic Committee (USOC) summit. "Sports doesn't ask what your party affiliation is."

His comments were either hopelessly optimistic or hopelessly naive. USOC chairman Larry Probst had a more realistic view about a Los Angeles victory, given the anti-Muslim and anti-immigrant blather among the Republican candidates, particularly from Trump. "At the end of the day, this is all about building positive relationships with the IOC membership," he said after the USOC summit, according to Reuters. "Our relationship within the IOC was not terrific if you look back six or seven years ago, and [we] have worked really hard to rebuild those relationships."

While the leaders of the Rome, Paris and Budapest Olympic bids may be secretly cheering Trump's surge in the polls, each city has its own political problems.

Hungarian Prime Minister Viktor Orban has emerged as the main proponent of anti-immigrant policies in Europe. He has built a wall along the Serbian-Croatian border and argues that he is defending the largely Christian European Union against a Muslim invasion. His stance will do the Budapest bid no favours.

Paris had two horrifically bloody terrorist attacks in 2015, raising questions about the city's security measures. Rome has not had a terrorist attack, but the city is being dragged through a corruption scandal, known as Mafia Capitale, that alleges criminal links between some politicians and suspected Mafiosi. Rome currently has no mayor; the last one resigned in October amid an expenses scandal unrelated to the wider corruption case.

Montezemolo, who is the chairman of Alitalia and a former president of Ferrari – the dominant Formula One racing team during his 23-year reign, which ended in 2014 – admits that the Rome corruption scandal doesn't help. But he notes that corruption is not uniquely Italian and thinks Rome has a good chance of winning the 2024 Games.

He envisions a low-budget "Games of culture and beauty" that would reuse many of the sites from Rome's successful 1960 Olympics, such as the stadium and swimming pools. He sees medal ceremonies taking place in the Colosseum – the mother of all stadiums – and competitions in the Circus Maximus, where the chariot races were held in ancient times. "The touristic and cultural offer would be unique," he says.

It's a compelling package that may not be enough to knock the other cities out of contention – Los Angeles and Paris are the ones to beat. What he and other Olympic bid bosses do know – but won't admit – is that a Trump victory could prove ruinous to Los Angeles's Olympic dreams. 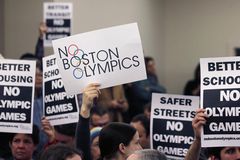 Amid corruption scandal, Rome submits 2024 Olympic bid while promoting its ‘incomparable beauty’
May 15, 2018 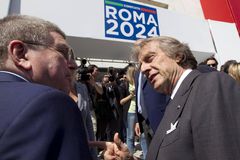 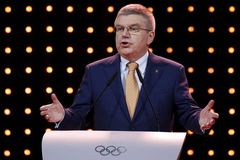